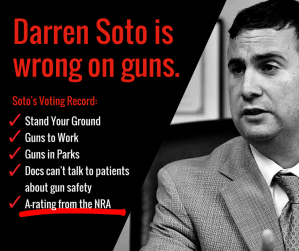 Our friend Peter Schorsch has an exquisite takedown of Darren Soto’s record on guns in wake of his highly politicized call for a Special Session of the Florida Legislature after the Orlando tragedy. Soto’s record on guns as Schorsch points out is consistent over the years including as recently as last year. Schorsch writes:

Rather than working with community groups and leaders who have been at the forefront of gun control efforts in Florida, Soto has instead, seriously undermined them. Take, for example, the League of Women Voters, which recently led the successful campaign to block campus carry laws in Florida and called for policy action in response to Sunday’s shooting. If the group had hoped to make a nonpartisan call for a special session to enact serious reform, they’d be facing an uphill battle thanks to Soto’s political posturing.

That’s not even the worst of it. In the wake of the Orlando shooting, Soto seems to be painting himself as a leader on gun control. In fact, the opposite is true.  Throughout his ten-year-career in the Florida Legislature, Soto has consistently sided with the gun lobby — on everything from “Stand Your Ground” to “Docs vs. Glocks” and more.

Soto even received an “A” rating from the National Rifle Association as a state Representative and as a Senator.

Just last year, Soto voted to strengthen Florida’s infamous “Stand Your Ground” gun law (SB 344), making it harder for prosecutors to try gun cases. Lucy McBath, the mother of Jordan Davis, a black teenager killed in Jacksonville in a 2012 dispute over loud music, urged the Senate Criminal Justice Committee to vote down SB 344. Soto sided with the gun lobby rather than grieving mothers when he voted for the bill, which the NRA deemed a “must-pass priority.”

As we’ve demonstrated before Soto has a record contrary to liberal values and progressive interests on a number of issues including education the environment and regulation of business. But Soto whose political ambitions know zero bounds has shamelessly sought to exploit a tragedy for his own political gain even though it is contrary to his long-standing and established record.