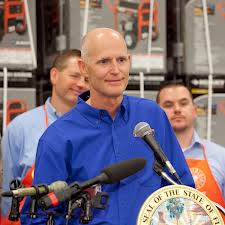 Having been returned to office by Florida’s electorate despite failing to meaningfully grow Florida’s economy in his first term, Governor Rick Scott will appeal to residents to relocate to Florida. Since this Governor and his allies in the legislature proudly gutted the growth management laws that worked for 30 years, a potential influx in population will continue to stretch Florida’s services to the max.

According to the Miami Herald, Governor Scott will hit on a few themes related to growth in his speech. One quote from the Herald is the following:

“I have a message today to the people of New York, Illinois, California, Pennsylvania and others: Move to Florida! We want you to keep more of the money you make because we understand it’s your money. We want your businesses to grow and succeed. We want to compete globally and win. Over the next four years, I will be traveling to your states personally to recruit you here.”

Governor Scott is going to waste time trying to recruit new residents to Florida, when he and his legislative allies have consistently failed to bring new businesses of note to the state, including manufacturing jobs. Obviously corporate America has made a decision that Florida is a less hospitable place to do business than Minnesota, Georgia or Virginia. It is not all about lower taxes. It is about having decent public services, good infrastructure, excellent public education, more accessible public parks, museums and cultural experiences among other things. Florida under Republican leadership has not developed any of these things as well as it should and part of corporate culture is to have vibrant urban areas with all the amenities that are involved with that.

Despite ranking third in population partly due to the low tax rate, Florida currently ranks 12th in Fortune 500 companies and 43rd in manufacturing jobs. These pathetic rankings come after the Republicans have had complete control of state government for 16 years.

Scott will also reportedly talk about the growth of government tomorrow. This is ironic coming from the leader of a party that has overseen a remarkable growth in state government. While the GOP has talked ad nauseam about regulations and creating a positive climate for business, every legislative session we see more and more regulations passed into law often with overwhelming majorities among Republicans.

The state is spending more money than ever and also has gotten into the habit of picking winners and losers in private industry, which is a big part of the reason for more and more regulations. More than believers in the free market, Scott and his legislative allies are crony capitalists who have expanded the size and scope of government to benefit friends and political contributors.

Four years from now, if Florida has not attracted the types of businesses it needs to, and we experience more explosive population growth, Scott could rival  Bob Martinez and Claude Kirk as the worst governors in this state’s modern history.