I spent Wednesday afternoon driving through rural counties on the way to Tallahassee and I noticed the different types of political advertisements on the way which made me once again begin to ponder rural Florida politics.  There were several colorful anti-Obama signs, lots of local election signs in various colors and forms, and even a handful of hand-painted signs for an undecipherable candidate for “SCHOOL BOORD”.   In the past ten years, online tools have reinvented the way we run campaigns. Databases, social media, mobile phone banks; everything has changed so quickly that campaigns are much more efficient than they used to be and the Obama campaign has a lot of the credit for that.  However, this progress has not been universally applied.  In fact, some areas were completely skipped by this campaign revolution and that is making them hard for the data-driven, social-media crazed, and door-knocking Obama veterans to help with.   You cannot hold a neighborhood canvass in Lafayette county – you’ve got a few towns that maybe have one street light, but for the most part people are spread out and isolated.   Sure, these areas are sparsely populated, but there are entire districts like this all over the state.  With no easy way to use the high-tech GOTV skills, these low population areas are often left out of the political dialogue.

Why does this matter? Let us look at the map:

The Florida Democrats have a rural area problem, plain and simple.  Clearly, the rural/urban divide has had a significant impact on the Democratic/Republican district split around the state of Florida. As is shown above, Republicans dominate rural seats in the state of Florida so much so that Democrats  are reluctant to even consider running candidates in these rural seats and for the most part, these incumbents are overwhelmingly re-elected unopposed.   And there are good reasons on paper for this reluctance: rural areas have weak (or non-existent) Democratic Executive Committees, low fund-raising abilities, and problematic communication challenges.  Yet the failure to even challenge these seats makes a Democratic majority even further out of reach. This is a recent development when you consider that as recently as 1996, the Democrats controlled the majority of rural seats in the State Legislature.

The urban rural divide is nothing new; in fact, the founders took great care to make sure that rural issues were properly represented in the fledgling United States and this was a great deal of consideration when designing how the government works.  As alignments have come and gone, the rural vote has gone both ways over the years.  There is a lot of recent attention to this in the wake of Obama’s campaigns:

An excellent Governing.com article that lays out the rural power structure

As this map shows,  Democratic party has to figure out how to run a rural campaign in Florida if they ever hope to  close the seat gap between them and Republicans.  As constantly cited in the media, Florida has more Democratic voters overall, so despite of the gerrymandering challenges, this must to addressed.   And above all, the Democrats should start by putting up candidates in districts that have Democratic majorities.   The easiest place to start would be districts there Obama was victorious.

Here is the same map with the 2012 Obama results: 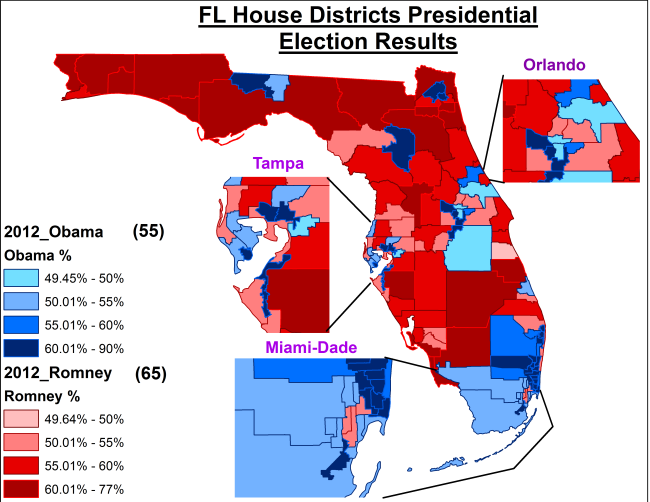 As you can see, there is a lot more blue in the bottom map.  The overlying question becomes why do Democrats  leave these seats on the table, even when some have favorable Democratic numbers?  If Obama can win a district, chances are that another Dem can and yet over 10 seats that were won by Obama are currently being held by Republicans.  While the debate rages on, these seats go unchallenged.   Even beyond the districts that Obama won, there are many that are slightly pink where local names and issues could have a major impact if there was a local force to propel them forward.   While some of these rural districts have Democratic candidates filed, they are typically underfunded political neophytes and mostly ignored by Tallahassee as these seats are deemed ‘nonviable’ and a waste of money and resources.

The reality is that viability of races is a highly subjective measure.  While Obama made drastic changes in the way that elections are run, the reliance on data-driven campaigns is also limiting.   An overconfidence in data undermines the importance of local issues and local people.  A standard measure to deem viability is the Democratic Performance Index, or DPI, which attempts to gauge number of votes Democrats can expect in certain districts.  The key component of using a DPI is finding a comparable election to compare data with, however, this measurement completely disregards the local political climate, local issues, and the ability of a candidate to network and utilize community resources.  Since there is less data collected in rural areas, the DPI is less reliable, yet there is not an easy alternative to measure if a race is winnable.  So while the FDP picks and chooses a few races to play in, the decision is mostly based upon Tallahassee consultants rather than politics inside the district.   Clearly, this has not been a winning strategy.

Not running candidates is part of the problem in this data-driven world.  When you do not run candidates, you do not get that data that these metrics depend on.  Meaning that if a candidate wants to run in 2016 that was uncontested this year or last cycle, they will have to go back years in order to find a similar race. The longer you go back, the less reliable DPI is, simply because the political climate is changing so rapidly. The election of Obama, the rise of the Tea Party, and the divisive Governor Scott all have had ripple effects on local governments and if a candidate needs to go a cycle or two back to try to get a good estimate, the changes in the district could be huge.  And remember, even though candidates do not have an opponent, that does not mean that they do not fund raise – many raise thousands of dollars that are spread around other races.  So by not running candidates in these red seats, not only do you not collect data, but you also leave them open to help with other races.  Again, this has not been a winning strategy.

More important than all that, local elections tend to be much more candidate driven rather than party loyalty, which is also hard to measure and graph into these calculations of viability.  One of my favorite quotes in politics comes from Tip O’Neill: “All politics is local.”  Take the case of Representative Elizabeth Porter in District 10, (which is right up at the top in the middle). Looking at this district, there are technically more registered Democrats than Republicans, although Obama lost badly.   These Democratic voters are fickle – low-turnout, failure to vote down ballot, and inconsistency plague the calculations for a Democratic candidate here.   However, that does not mean Porter is unbeatable.  This is her third term and she merely has a write-in-opposition and was on no one’s radar to think of challenging.  While no one living in Tallahassee would think of targeting this seat, many people  in High Springs and Lake City were ready to be done with her. There are constant complaints about how she refuses to meet with her constituents, refuses to take any action on the springs, even though there are many in her district depend on the springs preservation, and has reluctant support even from the Republican party in the area.  When members from the Ichetucknee Alliance went to meet with her about springs protection, she simply told them that she had been fighting for the springs for 10 years and they should not worry about it, that was her job.   Numbers and data are not going to tell you this part of the story.  Same with District 19 with Representative Charlie Van Zant, who is now famous for claiming that Common Core will make your children gay  (Incidentally, Representative Debbie Mayfield somehow escaped the public scalding that Van Zant faced, yet is shown here following up his statements and giving them a healthy endorsement – it is curious that she has not gotten the same thrashing).  While he is backed by local industries and strong church ties, many locals are quite ashamed of his statements – yet they are not even given a chance to voice this, as he has no opponent.   This disenfranchises voters and ultimately, leads to lackluster party support.

Ultimately, there is a problem in the top-down candidate recruitment model that the FDP uses when it decides to support or candidates and the proof is in the first map at the top.  The fact that local DECs are unsupported and unprepared to run effective house races is also part of the problem – there should be local resources available and more emphasis on building a local bench.  While there should be come measures of support from the FDP- I think that campaign training should be required before party assistance is a great idea – this measure they have going is simply not making the progress needed.  In the end, there is too much power concentrated in Tallahassee and not enough on the local level, where people can utilize local issues and politics to make local wedge issues to win instead of depend on the data and DPI.  The reality is that these large rural districts play a lot more to local issues than larger races and much more depend on personal relationships and friendships. Environment, education, and poverty all exist in rural America, but in a very different context than in urban settings.  Only local people on the ground understand this and yet this is hard to fit into Tallahassee’s data formulas.

But this problem has to be addressed.  Everyone already knows who is termed up in 2016, so it is time to start setting the groundwork for candidate recruitment and the FDP has got to look at these rural districts and start playing.