Want an insight into Trump’s America? Look at Modi’s India 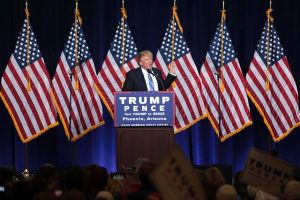 Donald Trump now famously said a week and a half ago at a rally thrown by Indian-American Republicans that he is a “big fan of Hindu.” While many in the media seized on this remark as humorous proof of Trump’s cultural ignorance, I saw it as something very different. A clear attempt to link with the religious fundamentalist agenda, cultural biases and anti-muslim bigotry of many in the audience that night.

The high socioeconomic status of many American Hindus coupled with bigotry toward other immigrant groups (“we are the right immigrants, the benevolent ones, the ones who contribute brainpower to the American economy and society”) has driven many Indian-Americans toward Trump. The majority of those of South Asian extraction in the United States are likely to vote for Secretary Clinton for President, but a vocal minority who aligns with Hindu fundamentalist though have embraced Donald Trump in a very aggressive manner.

The Republican Hindu Coalition’s “anti terror” event of which Trump was the keynote speaker reminded me of the 1992 GOP Convention with its blatant religious overtones and Pat Buchanan’s scary cultural war speech.  The reality is that Trump’s vision for America has a template already on display for the world to observe – Today’s India of Hindu fundamentalist Prime Minister Narendra Modi

Modi combines a rock star, entertainment-type telegenic figure with a religious bigot. His election as Prime Minister in 2014 has heightened tensions with Pakistan while empowering religious fundamentalists to attack the nation’s large muslim minority. Trump’s perceived Modi links have made him popular among the group mentioned above  and his style probably reflects similarities to how Modi governs.

Trump much like Modi is a big talker, but in fact very weak when it comes to actually engaging in bilateral or multilateral partnerships. Modi’s rhetoric of fluff in 2014 which gave hope to many Indians disaffected with political corruption and insider politics has given way to renewed religious fundamentalism, a downward spiral from a business/economic standpoint and the potential of a war with another nuclear power.

Modi’s American supporters who threw him a massive gala at Madison Square Garden in the fall of 2014 align with Trump because they find his views on immigration from Latin America and his bombastic rhetoric about muslims appealing. These Hindus no doubt find themselves superior to other “colored” races and have spent much of their time in the United States aligning with right-wing, largely white christian political interests. It’s the most naked and open form of bigotry practiced or promoted in western society that appeals to this group of Indian-Americans.

Fortunately many Indian-Americans, myself included have rejected this polarizing and tribal view. Many Indian-Americans rightly sees Pakistani’s and Indian Muslims as our sisters and brothers. However the less tolerant view has found a home in Donald Trump’s campaign and it is likely should Trump be elected, Modi might represent his model foreign head of state.