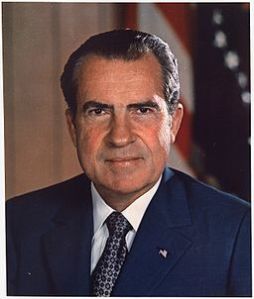 Both Donald Trump and Marco Rubio have done a fair amount of race-baiting either subtle (Rubio) or overt (Trump) over the course of the last few months. The GOP race now in Florida has featured this baiting  This is sadly nothing new in the annals of this state.

In 1968, Alabama’s Democratic former Governor George Wallace who had become a national figure with his “stand in the schoolhouse door” ran for President on the ticket of the “American Independent Party.” The candidacy despite coded words like “crime,” “law breakers,” and “patriotism” was about one thing- race. Wallace had been a populist earlier in his career and had in fact been considered a liberal on race in Alabama. But after losing the 1958 Democratic Primary for Governor he vowed to never be beaten on the issue again.

As Governor of Alabama, Wallace became the leading national opponent of President Johnson’s Civil Rights program connecting with the public in a way the old Senate dinosaurs who fought to protect the “southern way of life” through dilatory legislative tactics had failed.

Wallace obviously should have had some cross-border appeal but his showing in Florida was deeply disturbing. Wallace won the majority of Florida counties and despite Richard Nixon’s victory in the state, he needed to run up big vote totals in urban centers, most importantly St Petersburg, Orlando and Fort Lauderdale to carry the state. Democratic nominee, liberal Hubert Humphrey carried Dade County, the most populated county in the southeast at the time by a very wide margin but otherwise only carried sparsely populated Monroe (the Keys) and college dominated Alachua, both by small margins. Still the big numbers in Dade were enough to give Humphrey more statewide votes than Wallace who had won 34 Florida counties, including every county north of Gainesville both to the east and west as well as Dixie oriented counties of Okeechobee, Glades, Hardee, DeSoto, Polk and Sumter in the state’s interior. At the time Dade County had close to 1/4 of Florida’s voters, and Miami was at the time more like a northeastern city than a Southern or Midwestern one.

The same day the racial backlash claimed the political career of a great Floridian, Leroy Collins. Collins was defeated by Ed Gurney for US Senate, giving the state its first Republican Senator since the carpetbagger governments of  the Reconstruction era. Collins had been a  mild segregationist as Governor (every  elected Florida Democrat at the time was a segregationist- it was a requirement to win the Democratic nomination for any office in the state) but had resisted attempts by the legislature to shut down Florida’s public schools rather than admitting black students and had been instrumental in trying to negotiate a settlement at Selma in 1965. Pictures of Collins with the recently murdered Martin Luther King Jr, circulated across the state leading to Gurney gaining an estimated half of the registered Democrats voting for him.

Gurney was a reactionary conservative from Brevard County (which became Republican during the space program boom of the early 1960s) and would later go onto great infamy with personal scandal and his pathetic defense of President Richard Nixon during the Watergate Scandal. He served one-term in the US Senate being so scandal tarred that he could not seek reelection in 1974.

Collins efforts to make Florida a modern state were used against him by Gurney and the Republicans. The son of a Tallahassee grocer was beat badly in rural areas by a Maine born, Harvard educated carpetbagger. Half the state’s Democrats mostly native southerners voted for a carpetbagger Republican. The irony of ironies in an election where George Wallace carried 29% of the statewide vote carrying every county north of Gainesville, and in all of those counties Gurney won, becoming the first Republican ever to carry many of them for any office. Richard Nixon won Florida, just as he had in 1960, but this time the combined Wallace/Nixon (conservative) vote was close to 70% of Florida’s electorate. At the time registered Democrats still represented the vast majority of voters in the state.

Collins won (Miami) Dade by a nearly 2 to 1 margin and as noted above that was then nearly 1/4 of the state’s vote. But in the rest of the state, the former Governor whose legend would only grow in future years was beaten badly, carrying just Alachua, Monroe and Hillsborough counties.

Thankfully in 1970, the racial backlash would end  for the time being and Florida would elect statewide for the first time two of the greatest men to ever hold public office in the state- Reubin Askew and Lawton Chiles.  Many long-term Republicans who had immigrated from the midwest were uncomfortable with the new emphasis on race preferring to return to pure conservatism of the Bob Taft school. However, the neo-liberal President in the White House, whose relationship with traditional conservatism was troubled would have none of it.

In 1972, having learned the lesson from the Wallace Campaign, Richard Nixon shifted to a hard right position on race, a contradiction of previous liberal and quaker influenced stands on the same issue (it is often forgotten that Nixon got a large percentage of the black vote in 1960, including here in Florida, a state he carried).  Weakened in his own party by his leftward drift on economics and environmental issues, Nixon charged right on race and cultural issues to win working-class Democrats en masse. Nixon won 72% of the vote in Florida and won upwards of 80-90% in some Panhandle counties. Holmes County was Nixon’s single best county in the nation carrying close to 92%. These numbers were remarkable when you consider at the time close to 70% of Florida’s registered voters were Democrats.

In 1980, Ronald Reagan was able to use the “states rights” mantra to make Florida the most Republican state in the south. In 1988, Lee Atwater’s racially motivated ads pushed George H.W. Bush’s poll numbers upward and Florida once again was once of the best GOP states in south. But in the 1990’s the Republicans in Florida eager to finally build a statewide majority party under the direction of Party Chairman Tom Slade and Jeb Bush would be elected Governor in 1998 became race neutral and embraced not only African-Americans but also immigration and the state’s growing non-Cuban Hispanic population.

For many years the Florida GOP hierarchy attempted to be race neutral. Whatever my other issues on policy are with Governor Bush, I do continue to believe both he and his brother didn’t view the world in racial terms at all. George W. Bush had prevented the dangerous immigrant-baiting Proposition 187 from coming to Texas and bother Jeb! did the same in Florida. Creating a conservative GOP that united the races seemed to be a big part of the Bush agenda.

However in 2016, Florida produced a candidate for President echoing many of Wallace’s themes in the former of US Senator and former Florida Speaker of the House Marco Rubio. Rubio allegedly a protege’ of Bush has veered well off the reservation when it comes to civility and race-baiting.

Rubio’s brand of racial and social conservatism is matched by equally right-wing ideas on economics unlike Wallace’s. I recently watched a Firing Line with William F. Buckley episode from 1968 and it was obvious that Wallace wanted to keep some of his credibility as a fiscal populist/liberal. Wallace challenged Buckley on public spending for hospitals, roads and schools. Rubio on the other hand has a clear vision of the world and the United States that mixes Wallace-esque race-baiting and cultural themes with supply-side economics. Rubio also is willing to associate openly with allies that use the N-word in a non-coded way and that no doubt is designed to maximize his appeal to Wallace voters.

The attempts to claim the sitting President who is African-American is treasonous or has committed sedition by Senator Rubio fits in well with the Wallace and Nixon themes from 1968 regarding those who opposed the Vietnam War. But both Wallace and Nixon stopped claiming war critics who were elected officials such as Sen. J. William Fulbright (D-Arkansas), Sen. Mark Hatfield (R-Oregon) or Rep. Pete McCloskey (R-California) were “deliberately weakening America,” a claim Rubio has thrown out toward the current occupant of the White House who happens to be African-American. This plays at the views of some GOP voters that Obama is somehow illegitimate because he is not white and that he as a non-white President is somehow an agent of a foreign power.

It’s difficult to know what Rubio really believes beyond self-promotion, but his rhetoric and willingness to use colorful language to describe the matters of importance to this nation and the world no along with his anti-intellectualism doubt must classify him as an heir to both the Nixon and Wallace legacies.

Donald Trump who spends lots of time in Florida and currently leads the GOP field has gone a step further. His overt rhetoric is a perfect cross between the most cynical of Nixon’s and Wallace’s and even his seeming encouragement of violence at rallies like Wallace’s in 1968 plays well in certain parts of this state. Trump like Nixon is probably simply using racial issues to inflame an electorate for personal political purposes. But the fact that Trump is not a racist should not matter – the reality is he is appealing to the basest and worst instincts of many in this country. By playing for the lowest common denominator, Trump is projecting an ugly picture of the United States abroad.

As I have said many times on these pages I believe racism in the United States is not as bad as in much of Western Europe, Latin America and Asia. However, the recent reaction to the #blacklivesmatter movement, incidents of gun and police brutality and now the Trump phenomena mirrored by Rubio making more subtle racial arguments indicates our society is backsliding from the post-racial state we were in a decade ago. Unfortunately as always when reactionary movements happen in this country, Florida seems to be in the middle of it. This is unfortunate for all who love this state and nation.

← NeoCons poised to abandon GOP for Clinton?
Liberals can malign Trump but not all his supporters →
Join 22,351 other followers