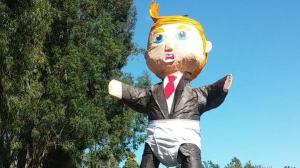 Here in Florida we have many Republicans whose foreign policy views would fit into the “neoconservative” camp. While this state has some traditional conservatives, the neocons unique blend of a free-market driven economic ideology combined with an interventionist foreign policy (which mirrors that of the neoliberals in many ways) is completely contrary to the highly-regulated, isolationist, anti-free trade and anti-foreigner ideology Donald Trump seems to be molding. Secretary Hillary Clinton, unlike Senator Bernie Sanders could provide a soft landing spot for neoconservative thinkers, activists and voters come November 2016 should Trump be the GOP nominee. With the assumption that Clinton has the Democratic nomination on ice, the movement of some neoconservatives toward the Clinton camp has already begun.

Last week Politico reported several GOP hawks are debating whether to vote for Clinton instead of Trump should that be the General Election matchup. Those who favor intervention in the Middle East have found an ally in Secretary Clinton both on the Iraq War and Libya operation. Clinton also was thought to be among the more hawkish members of the Obama foreign policy team when it came to possible intervention in Syria. Many leading Republican thinkers on foreign policy have already signed an open letter urging GOP voters not to nominate Trump. It has to be assumed some of these signers might in fact endorse Clinton in November were Trump to be the Republican nominee.

The Trump coalition which uses race-baiting and economic fear as a motivator like many authoritarian voices before him might unite some forces on the far left and the extreme right.  However, it is very possibly those concerned about the image and security of the United States, Middle Eastern regime change as well as open markets could flip to Secretary Clinton in the General Election. We have many such voters in Florida and in a state with such tight margins in three of the last four Presidential elections in addition to the last two Gubernatorial ones, this voting bloc, small as it might be perceived is likely to be courted by the Clinton folks.

For years, the GOP Foreign Policy establishment has been split between conservatives in a traditional sense and neocons. But the Trump candidacy seems to be providing a unifying external factor to heal this long-standing division. While many may not openly stump for Clinton, the position of their views and interests might in fact be better served by the GOP losing the White House were Trump to be nominated than a Republican Party whose foreign policy ideology swings wildly towards the isolationist and strongman views of the new President.

Trump’s continued electoral success is creating a dynamic where the traditional electoral and insider coalitions in Presidential elections are shifting – perhaps not on a scale of 1896, 1932 or 1968, but certainly in some manner. It will be fascinating to see how this all shakes out in the coming months.

← Flashback Friday: Daylight saving time turns 100
GOP Statewide Race-Baiting in Florida from 1968 to 2016 (And those Republicans who opposed it) →
Join 22,490 other subscribers