Lesson from Irma – much of Florida cannot handle a big storm 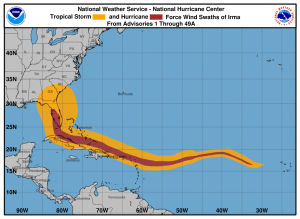 “We didn’t dodge a bullet, we dodged a cannonball”

Kudos to Governor Rick Scott and Emergency Management in the Keys and Southwest Florida. Kudos to those municipal and county officials like the aforementioned Mayor Levine, Coral Springs City Commissioner Dan Daley and Tampa Mayor Bob Buckhorn (among others) who got out in front of this storm.  You passed the Irma test. For the rest of the state? You  either got an “incomplete” or failed. But thankfully this turned out in many ways to be an elaborate drill, one with consequences but one where bullets were dodged. Sea-level rise and Climate Change have made us vulnerable and the failure to deal with this means any sort of adversity breaks the state. We’ve spent most of our effort and energy the last month on this website talking about Hurricane Andrew which for southern Florida was our defining event – our Great Chicago Fire, our 9/11, our Blitz. Irma gave southeastern Florida a scare, but it was no Andrew – not even remotely close. Yet the disruption its caused with 80% of residents of Miami-Dade and Broward without power, massive flooding and impassable roads is quite honestly unacceptable. It’s the residual effect of overdeveloping nature’s buffer land while not doing basic things like pruning trees and having proper drainage in some areas.  The brunt of the storm battered the Keys and southwest Florida and in the next few days we’ll know more about damage from those areas, including if this storm may have done the type of environmental damage other massive Hurricanes that have plowed through Florida Bay and the Everglades have.

The failure in southeastern Florida is not the fault of the residents or even in many cases of elected officials but is a reality we have to face. Had a Category 4 storm barreled into Miami-Dade or Broward County or conversely stayed off the Gulf Coast and hit Pinellas and Hillsborough directly, the state might never have recovered as Florida’s economy is dependent on those two areas (Miami-Dade and Broward especially).  It’s also worth noting that the amount of people who irrationally panicked despite not living in evacuation zones and choose to drift to another area of the state which could have also felt serious Irma impacts was shocking (I don’t blame them for panicking especially with the aftermath of Harvey all over TV, but hopefully this storm taught a lesson). This is Florida, we are a peninsula and no place in the state is safe from Tropical Weather, and basing your lives on forecast tracks five days out is hopefully something many have learned NOT to do again. The increased volume of people on the major highways connecting metropolitan areas of the state last week exacerbated gas shortages and made preparation that much more difficult. Since many I know consider me a Hurricane “expert” (I’m not but am mildly obsessed with Tropical systems so yeah I am more of an expert than the average Floridian) I was getting texts from people all over the state all week asking me if they should go. My advice was generally “stay” except to those in the Tampa Bay area where I feared the worst given the region’s inexperience with storms of this magnitude.

Florida dodged a bullet with Irma but may not be so lucky in the future. If a storm with the intensity of the 1926 Great Miami Hurricane, the 1928 Okeechobee Hurricane  or the 1947 Fort Lauderdale Hurricane follows the same path to the coast in our lifetimes the massive Miami/Fort Lauderdale/West Palm Beach would hardly be standing. A counter-argument can be made that the 1926 storm, Betsy, Andrew and Wilma came and went rapidly through the metropolitan area leaving a quick trail of destruction while Irma impacted Miami-Dade  and Broward for about 24 hours and Palm Beach for about 20. But the bottom line is Irma did not bring anything from a damaging wind standpoint like those previous storms yet seems to have caused a level for the area of havoc which is moderately stunning. The amount of rain was heavy for the region but that we had flooding in areas of southeastern Florida as early as Saturday evening, a full 18 hours before Irma’s fury really struck the area is completely unacceptable.

The vaunted Miami-Dade building code has given southeast Floridians a false sense of security. As a long-time resident of the area it has made me arrogant about what we can handle. Yet, southeastern Florida wasn’t able to handle what was essentially a sustained pounding from TROPICAL STORM force winds with frequent Cat 1 and occasional Cat 2 gusts (We have reports of a 111 MPH gust in western Broward an area that might have gotten sustained Hurricane force winds for a short period, 109 MPH in Pembroke Pines and persistent rumors spread on national TV of 100 MPH gusts in Downtown Miami) and that’s a very worrying sign for the future. The building code stood up to this storm, but so little else about southeastern Florida did.  That is despite over a week of preparation and a surreal sense of panic around town from Labor Day onward.

As for the Tampa Bay area, many officials including Tampa Mayor Buckhorn understood the challenge of getting an area that rarely gets serious Tropical Weather impacts and had not been forecast to be hit until Friday morning prepared quickly for what might have been a monster storm. But the Tampa/St Petersburg area didn’t get put under the gun the way we had anticipated as the storm tracked about 25-30 miles east of the forecast track (which is what brought the more sustained winds into southeastern Florida). The interior of Florida, the “Heartland” which got decimated by Charley in 2004  took the brunt of this storm after  landfall, and we will have to assess damage there in the coming days. Orlando dealt with heavy winds and rain at similar levels of southeastern Florida but for a lot less time.

For Northern Cuba, the Keys and southwest Florida you took the brunt of a monster storm so it became a pussy cat for the Tampa Bay area and southeastern Florida. The residents of those two massive metropolitan areas should be forever grateful because neither was terribly ready for what could have come. Hopefully if and when Major Hurricane hits the Tampa Bay area or Miami/Fort Lauderdale area, we will be more prepared – not just with our week of Hurricane routine but in general. That doesn’t fall on the residents but on our leaders, the utilities, the municipalities, etc to learn the lessons from Irma, understand most of us in Florida really dodged a bullet and prepare properly and accordingly for the future.

We’ll have much more on the Irma aftermath and resume our Andrew series as the week rolls on.