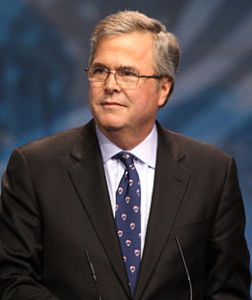 GOP Presidential candidate Jeb Bush left the Governor’s office over eight years ago, yet his influence continues to dominate the legislative agenda of the state GOP. His views on education have been particularly damaging and each GOP legislator in our state must pass a “Bush litmus test” on education in order to be in the good graces of party activists and donors. But when Bush was Governor, he eventually lost the support of many GOP lawmakers in Florida.

While at first Republicans signed on in lock-step to Bush’s “reforms” cracks in the support for school “choice” have been apparent for a decade now. Many Republican elected officials have realized for all of the phony organizations and big corporate cash splashed on the school “choice” effort, that grassroots support for anything that destroys the public schools system is minimal even among self-proclaimed conservatives.

Bush failed to deliver on job promises and his funneling of state funds to Scripps Research Center now looks like a disaster. Since Bush began pushing for school “reforms” Florida’s ratings in academic progress and higher education have continued to decline and we have seen countless for-profit schools go out of business.  The “reforms” pushed by Bush including an over emphasis on standardized testing has contributed to a downturn in morale among Florida’s best and brightest teachers. Despite all of this, Bush’s allies continue to push “reforms”  which cast aspersions on the public school system when in fact the failures in the education system have come from the inadequate funding, constant tinkering of standards, over-emphasis on testing and the push for charter schools/vouchers during the Bush, Crist & Scott Governorships. Now Bush seeks to push this agenda forward nationally using his candidacy for President as a vehicle.

When he was Governor, Bush was always confident bordering on cocky. His self-assurance and quite frankly his  arrogance rubbed most the wrong way including many Republicans. Since jumping into the Presidential race, he’s appeared to be less shrill but also less confident/consistent in his words and mannerisms. Perhaps this is simply the works of handlers trying to make Bush appear more humble during the 2016 Presidential Campaign. Maybe it’s some growing as Bush has gone from being a younger conservative ideologue committed to making Florida the center of right-wing think tank inspired legislation to senior party statesman, especially when compared to the rhetoric of former Bush protégé Senator Marco Rubio whose immaturity and use of platitudes has made Bush look exceptionally mature and statesmanlike by comparison.

But it is worth noting that before Bush was elected Governor, the GOP wasn’t a consistent force in the state and he more than any individual changed the game in this state.

In the late 1960’s political prognosticators believed Florida was quickly shifting to the Republican column. The state was supposed to be the first state in the south to shift to the GOP column.  But the Democratic landslide elections of 1970, 1974 and 1976 moved the state further into the Democratic column than it had been in the mid 1960’s. By 1982, the Democrats held 32 of 40 State Senate seats, every Cabinet office and 89 of 120 House seats, a significant gain from even the mid 1970’s. Claude Kirk’s eccentric behavior and the embarrassment of Ed Gurney  set the GOP back years despite both being elected statewide in 1966 and 1968 respectively.

But by the late 1980’s the Republican were on the move again and with the late Tom Slade as party chair in the 1990’s the GOP flipped both houses of the legislature and the majority of the Cabinet. By 2002, the GOP had achieved complete dominance in state politics, similar to the numbers the Democrats enjoyed two decades earlier. Jeb Bush’s candidacy for Governor in 1994 brought in new GOP voters and while he lost in a squeaker, that same night the GOP gained the State Senate for the first time since Reconstruction and picked up eight State House seats putting the chamber within striking distance of a takeover (The Democrats majority was cut to 63-57 and the chamber would be lost to the party forever two years later).

In 1998 Bush was elected Governor and he ushered in a generation of Republican dominance of the state. His political accomplishments changed the complexion of state government and the image of the GOP from an aloof party of elites to a problem-solving party of government that had compassion. Unfortunately for those of us on the left, those solutions were problematic, but his political skill was unmatched.

It is worth noting that the national GOP’s image has resulted a near lock for the Democrats in the electoral college and a party whose image is damaged among younger voters. Bush’s image in Florida prior to his recent plummeting in the polls was more like the way the national GOP was viewed in the 1980’s when they were winning national elections.

← Is Marco Rubio vying to be the ideological heir to racist politicians?
Robotic race-baiting, McCarthyite Rubio remains a real danger to American values →
Join 22,359 other subscribers