Bill Maher, liberals and Islam – Does he have a point or am I a racist? 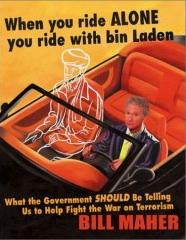 “When you ride alone” by Source. Licensed under Fair use via Wikipedia

Bill Maher has railed against Islam often during his career, most recently on Friday night’s edition of Real Time with Bill Maher.  (Pick up a copy of When You Ride Alone and you might understand his views a little bitter)  Maher who proudly bashes all organized religions has somehow failed to distinguish the differences between radical Islam and those who practice the religion peacefully. In this, Maher’s attitude is similar to that of the same conservatives that he mocks every week  on other issues.

But Maher’s points about liberals making excuses of radical Islam to me have been spot on for years. Islamism is a right-wing ideology on par with religious fascism (as practiced in Franco’s Spain and for the beginning of his regime, Salazar’s Portugal)  or in some ways similar to the views expressed by those on the right in the United States. Maher’s most recent rant is below.

Time after time when I have tried  to have an educated and nuanced conversation with people on the left in the United States  about the right-wing radicalism of certain strands of Islam, the racism practiced against people whose appearance is similar to mine by the right-wing rulers of several US-backed dictatorships in the Gulf region (Saudi Arabia, Kuwait, Bahrain and Qatar), and the real threat posed these conservative forces, I get serious push back from my natural ideological allies and even get called a racist from time to time for these views.

As a South Asian I see Qatar for example in the same light I presume many African-Americans saw apartheid South Africa until the early 1990’s. The fact that many South Asians don’t care about the welfare of their kin and Qatari’s have bought up so many interests in Western Europe and the United States make me even more angry and uncomfortable. India tends to be a classist society, a legacy of British rule and the Caste System, so many upper-class Indians or Indians in the west simply don’t care that they have kin that are oppressed in Qatar and other Gulf States. For me this is unforgivable.

It seems many Florida and American liberals don’t want to see badly of any people who are not western or white – the rest of the world is filled with victims thanks to western imperialism and white privilege.  But it is not that simple – it is never that simple. Thoughts based on right and wrong determinations like that were once the exclusive province of conservatives. Unfortunately, today liberal views shaped by (largely justified) hatred towards George W. Bush and the Republican wars of the last decade and our own domestic racial divides. This leads to fairly simple narratives branding all Muslims as victims or all people of color around the globe as oppressed even when they manage the most sexist, racist and misogynist policies/regimes on the planet.

Our own sorry history of racism and the legacy of colonialism should NEVER justify the rise of right-wing ideologies that profess hate as their core value in other parts of the planet – and that is what radical Islam much like conservative strands of Christianity and Hinduism as a governing ideology are an antithesis to what we believe as liberals and progressives.

This is not to say that many of the Republicans and conservatives are not race-baiting in the aftermath of the Paris bombings and the thwarted possible bombing of a football match in Hanover days later.  Many conservative voters are driven by fear, hate and simple narratives – the us (good guys who are white) against them (bad guys who are brown or black) narrative often works in GOP primaries. What was once played as subtle racism is now overt – but liberals don’t need to create an equally simple reaction, one that flips the narrative completely.

Last week’s efforts by the GOP to block the entry Syrian refugees into the country was blatantly racist and would drop the ball on America’s MORAL obligation for creating the environment where Syrian refugees both Muslims and Christians were displaced from their native land. The environment was created by the Invasion of Iraq AND the bungling of the Syrian situation by President Obama where he reflexively talked about “red lines” and opposition to President Assad whose leadership had held the country together – but Assad being an ally of Russia and Iran was a more important consideration for Obama, neocons and the GOP than the reality that he was the best bet to keep Syria from spawning a major refugee crisis and from falling into the hands of Al-Qaida type terrorists.  Because the United States’ own actions and words created the situation where Syrian refugees are seeking asylum, the US has a moral obligation to allow them in the country. We must meet that obligation.

The irony of  all of this  discussion that conservative regimes backed by American investment in the Persian Gulf region and supported openly by NeoCon thinkers and politicians are the root cause for much of the radicalism today. S0 while many Republicans preach a racist and closed America, it is people they do business with in the United States that have built up the regimes that oppress their people both fostering a climate for radicalism and also on another hand fund the seeds of radicalism with the funding of religious schools and rebel groups in other countries.

While Maher has an over-the-top way of describing this and any topic he chooses to engage in, I have long thought he had a point. My views are fairly aligned with his, and for that I have been accused of being a racist. Because I have rarely eve been able to have the conversation in full with many progressive friends because they cling to the “racist” mantra the second I try and open the discussion it was safer and easier for me to articulate my positions based on Maher’s rants and in writing rather than in spoken word.

The Middle East, North Africa and Central Asia are difficult places to understand. Most American liberals don’t get the nuances of the region or quite comprehend the radicalism that has seeped into large elements of population. Making excuses and not taking an objective view of things when our own values are violated makes liberals scarcely different than conservatives – even if it makes some people call me a racist, I will stand up for my progressive values.

← Flashback Friday: BCS Controversy of 2000
How to spot a threat to Democracy: Bernie Sanders and Philip K. Dick on radicalism and revolt →