State Senator Darren Soto (D-Orlando) will announce his candidacy for Congress (current District 9, but subject to reapportionment changes) later today. Soto seeks to replace Rep. Alan Grayson, whose voting record is about as progressive as it gets. From where we sit at TFS, Soto is one of our least favorite Democrats in the legislature. Soto’s voting record through his eight sessions as a legislator is on the extreme rightward end of what is acceptable as a Democrat. This is despite holding first in the House (following a hotly-contested Special Election victory in 2007) and a State Senate seat that were never seriously targeted by the GOP. Free from the constraints of tough primaries and quickly emerging as a favorite of business and school “choice” lobbyists in Tallahassee, Soto became the poster child for conservative Democrats who seek higher office by running in safe Democratic seats backed by Republican money and the support of large elements of a bipartisan political establishment. The Sunshine State News, one of the voices of record that conservative political insiders in the state swear by said the following about Soto:

“Soto is about as good as conservatives can hope for from his liberal Democratic district.”

The SSN is spot-on, but here’s our perspective — Soto is about as BAD a Democrat for liberals and progressives as anyone in the state. A quick overview of Soto’s votes in his legislative career indicates certain trends: 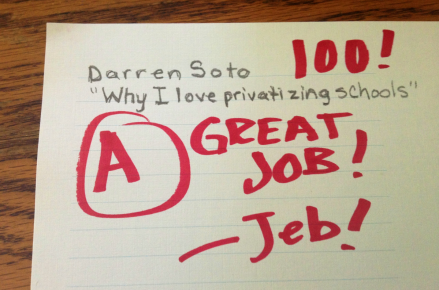 Each of these groups uses scorecards to try and influence votes of legislators pushing them to the right. In the case of Senator Soto, winning approval of conservative groups by scoring high on the report cards they issue is a fundamental part of his conduct in public office. For most Democrats that are elected to office they would consider low scores from these sorts of groups as a badge of honor. However, Senator Soto takes pride in voting as often as possible with lobbyists and special interests. Senator Soto is what we would call a “Chambercrat.” He’s a Democrat who says the right things on most social issues, while giving nearly every vote needed to conservative special interests and Republican lobbyists. Soto is the very embodiment of the toxic Tallahassee culture that has spread like a cancer through the Democratic establishment. It is interesting that Senator Soto has professed openly that he is opposed Jeb Bush now that he is eyeing a Congressional seat in a liberal area. But real proof is in Soto’s own Jeb Bush-oriented voting record, and the scores of interest groups closely aligned with Bush’s point of view. These votes have won him continued plaudits from conservative bloggers. Senator Soto could in fact be the founder of a “Jeb Bush Democratic Caucus,” were one to exist. Perhaps he can work to start such a caucus in time for the 2016 General Election, should he be successful in pulling the wool over the eyes of Democratic Primary voters in Central Florida. It would be particularly appropriate if Bush were to be the GOP Presidential nominee. Soto’s candidacy is yet another indication that the 2016 primaries will be a battle for the soul of the Democratic Party. Both of Soto’s announced opponents, Susannah Randolph and former Rep. Ricardo Rangel, are excellent progressive voices. Either would make a far better representative for the 9th District in Washington. In the coming weeks, we will continue to examine Senator Soto’s record. If progressives were fired-up about Patrick Murphy’s candidacy, they should be downright furious about Soto’s. The voting record compiled by Soto over the course of eight legislative sessions makes Murphy, by any objective comparison, look quite progressive. TFS’ Brook Hines contributed to this article