Clutch your pearls and hover over your favorite fainting couch. It’s primary season, so if you don’t already have one, here’s a link to DIY your own Fainting Couch and Toddler Bed. Build yours this weekend, because with 17 months until the election this baby is apt to see some action.

Check out this couch fainter of an email circulated by Nan Rich’s former Data Director Sean Phillippi. In the email that that some are calling spam, Phillippi says he’s a “proud member of the Progressive Caucus,” and launches into a “concerned Democrat” tirade against Alan Grayson, the presumed primary impediment to lifelong Republican Patrick Murphy’s entitled bid for Marco Rubio’s open Senate seat. It’s published here at the Squeeze at Phillippi’s request.

You have to wonder whether people who know Phillippi knew they’d be targeted for unsolicited messaging on behalf of conserva-Dem Patrick Murphy from the progressive Governor Nan Rich’s former Data Director. In one email chain shared with me, a lucky recipient of this bonus messaging complains that he didn’t sign-up for Murphy campaign propaganda. Phillippi responded in part by saying he knows Murphy “very well” because he “worked with him since he first started running for office in early 2011,” which raises the uncomfortable question of whether the Murphy campaign asked for access to Nan Rich’s supporter database.

And this isn’t Phillippi’s first swipe at Grayson.  A previous attack piece featured the bizarre claim that Grayson couldn’t win African American votes in a statewide race. Now Phillippi would like you to believe that Grayson presents a threat to the entire Democratic Party. The apocalyptic prophecy states that “in a fractious primary” Alan Grayson’s language is too colorful, and his divorce so overly divorce-y, that should he run for Senate he’d “be a serious anchor to Democrats nationwide in 2016, and cause grief for our Presidential nominee at the top of the ticket.” It might be worth the eye-rolling to be in on this spam list for pure entertainment, because really where else are your going get this level of political forecasting and unwitting satire?

My all-time favorite among these nuggets of apocalyptica might be the complaints about Grayson’s comparison of the Tea Party to the KKK, referring to the fringe-right Tea Party as “the home of bigotry and discrimination in America today, just as the KKK was for an earlier generation.”

Here’s a fuller context of Grayson’s comparison: “….when the President visited my home of Orlando, Tea Party protesters shouted “Kenyan Go Home,”….[with] posters saying “Obama’s Plan: White Slavery,” “Imam Obama Wants to Ban Pork” and “The Zoo Has An African Lion, and the White House Has a Lyin’ African.” 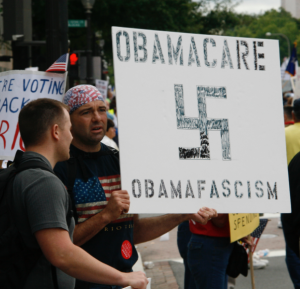 That sort of over-the-top racist rhetoric had been heating up for months before Grayson called it out. When was anyone going to put their foot down?  This rhetoric has an inherent subtext of violence. In whose reality is it appropriate to let that stand unchallenged? Are we all supposed to just “take it” and wait for shots to ring out? How is that a liberal Democrat calling out thinly veiled dogwhistles rooted in a history of racial contempt and real violence for being exactly what they are is intemperate, while the racist bile itself is apparently to written off as some kind of “boys will be boys” tomfoolery and let go?

Grayson continued: “Members of the Tea Party have circulated countless altered pictures depicting President Obama and the First Lady as monkeys. Tea Party members also called my fellow Member of Congress, civil rights hero John Lewis, a “n***ger,” and Rep. Barney Frank a “faggot.”…Tea Party Members of Congress have referred to Hispanics as “wetbacks,” and having “cantaloupe-sized calves” from picking fruit…there is overwhelming evidence that the Tea Party is the home of bigotry and discrimination in America today, just as the KKK was for an earlier generation. If the hood fits, wear it.”

The ugly language may be uncomfortable to hear, but the ugliness didn’t come from Grayson pointing it out — he was simply one of the few willing to do so. Since when do Democrats merit attack from “consultants” within our own party for frankly confronting the worst behavior of our opponents? Isn’t that what we ask our “representatives” to do on our behalf?

Another famous Alan Grayson quote that DLC campaign consultant types would like you to feel guilty for is his famous “Die Quickly” comment on the floor of the House when he was fighting so hard for the Affordable Care Act. This full quote read: “The Republicans’ health care plan for America: ‘Don’t get sick.’ …But..If you get sick, America, the Republican health care plan is this: “Die quickly.”

People like Charlene Dill would tell you how true this if she were still alive. She died quickly from having no health insurance, because the Republicans in Florida would rather that a young mother die from easily treatable illnesses than to provide insurance and see them get better. Again, this is simply a true statement.

It’s statements like these are part of the Just War of Words that Alan Grayson has fought on our behalf, which has made him the national brand he is. He’s the very definition of a “bold progressive,” and that’s exactly the problem for these who’s-paying-me-this-month-types.

Phillippi wants to complain about Grayson brandishing a sharpened metaphor? Why not instead attack the Tea Partiers for their racism, or the Republicans for obstructing healthcare and letting Floridians die in the process? Apparently we should all join in killing the messenger, lest Republicans be offended when their quite genuinely atrocious policies and tactics are pointed out publicly.

Alan Grayson didn’t create the ugliness in the Republican agenda — he’s working to reveal what’s already there so that we might, at last, do something about it. That’s apparently something recent Republican Patrick Murphy’s supporters find distasteful and indecorous.

But the young former data director circulating nasty anti-Grayson email really isn’t the problem here. He’s doing it on behalf of bigger, bluer dogs up at the Democratic Senatorial Campaign Committee, who share interests and consultants with Patrick Murphy. They’re petrified that a real firebrand liberal like Alan Grayson is in the primary because he’ll win it. Their dystopian view is that a Democratically-controlled Senate with a formidable progressive caucus would be much more difficult to steer toward Wall Street-friendly interests than the New Democrat Coalition are accustomed to ply on cheap dates with their conservadem puppies.

And there is a bigger picture in play. When the Big Blue Dogs refer to a “fractious primary” they likely also have in mind  the Bernie Sanders vs Hillary Clinton primary. Sanders presents a stark contrast from the bank-funded, corporate-friendly stance of Clinton, and that is apparently sufficiently threatening to the status quo to get Wall Street and its many surrogates lashing out early. If Grayson can succeed despite ruffling the smooth feathers of the financial elite, maybe Sanders can as well. Cue those pearls getting ground to dust in a thousand wealthy, sweaty fists.

“Centrism,” as that term is tossed around today, isn’t a middle between Republicans and Democrats. It’s literally a “third way” that gives primacy to business interests and then says, “See, they’re doing better now — you’ll be back in shape in no time.” It’s just another way of selling trickle down economics and Charlene Dill healthcare. We’ve spent 30 years trying to make neoliberalism work, and it just hasn’t done the job, either in terms of results or success at the polls. The voters have already moved on from the illusion that we can bow to monied interests in exchange for slightly softer social policy and somehow come out ahead.

The consultant class needs us to believe that their losing strategy and tactics aren’t the problem. Instead it’s our dang liberal ideology holding us all back. To be clear, that ideology is the value system that says if you work hard and play by the rules you won’t wind up living on the streets. That if you’re disabled, or a senior, or too sick to work, that the safety net you relied on your whole life will still be there when you need it. It’s the value system that says big business should pay their fair share and not leave our country in ruins, and that says economic and political inequality is morally wrong. Centrists hate this talk because it gets in the way of a good back-room deal.

Instead of trying to paper over the literal worldwide social and economic destruction that catering to monied interests has wrought, from which we have yet to even recover, and complaining worriedly about the “tone” of angry Democrats and the middle class, perhaps our helpful “consultants,” with their access to data, might actually do some analysis of what has gone wrong, instead of doubling down on “kinder, gentler” conservatism that delivered the legacy of the Bush years still damaging us today.

Grayson is one of the few bold Democrats in Washington like Elizabeth Warren and Bernie Sanders who refuses big donor money in order to fight the Just War of Words. They might use sharpened metaphors, colorful language, and (gasp!) a raised eyebrow here and there on our behalf against the armies of corporate lobbyists poised to clear the last few scraps from the table.

These are not the people causing the downfall of the party. The ones you’re looking for are the ones who can’t win an elections because they keep running conservadems like Charlie Crist and Patrick Murphy. Not everyone is impressed with the Murphy campaign. Grayson might not be the only other Dem jumping in.

In the email chain that was shared with me Phillippi defends his spamming, “I simply summarized and decimated the information.” Indeed you did, Sean.

“I did not use Sen. Rich’s email list, nor would I ever do so with any client without their explicit permission.  Sen. Rich knew nothing about my email until she received the blast. I have never spoken to the DSCC, much less coordinate anything with them.  I used my own personal contact database that I have compiled from several years of activism throughout Florida.  I sent out this email on my own, and purposely didn’t even tell anyone I was doing so until after it was done.  I have no role on Rep. Murphy’s campaign other than being a voter who will cast my ballot for him every opportunity I get next year.”