As I have previously stated, in my twenty five or so years of activism and involvement in politics, I have never been as angry or frustrated by anything as I have been by the reaction of those supporting President Trump (who once again I refuse to call conservatives, because Trump’s policies and rhetoric have little resemblance to traditional conservatism as practiced in this country) regarding COVID-19. They have been wrong about EVERYTHING when it comes to this virus. Absolutely EVERYTHING, for almost four months now. Yet they keep doubling down on the same myopic, anti-intellectual arguments that quite frankly now hurt my head to even process.

Again, while I have been on the left side of politics for a long time. I’ve never quite had the disdain for the other side that I do now,  and it is entirely because of this virus. In the past, I would respect the arguments given by the opposition and try and debunk them. But COVID_19 has brought us into a new territory of outright deceit.

It’s no mystery then as the rest of the industrialized world begins to get back to normal, having beat back the virus systematically and with a sense of unity and purpose, the United States is in the same boat as the developing world in terms of dealing with COVID-19; despite having greater resources than any country on earth. 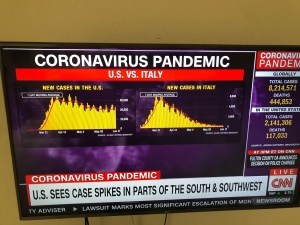 US v Italy as of June 17. Since then US cases have gone back up reaching a new peak, while Italy has begun phased, safe reopening.[/caption]

I have decided to put together a sampling of the push-back I have received over the last four months on social media regarding this virus from MAGA-types in this state as a guide and perhaps a reference for future idiotic commentaries. These are general themes, not specific tweets. The MAGA comments are in bold and divided by month. My responses or commentary are below each MAGA comment.

Easily debunked at the time because China had alerted the WHO in mid-January. Late no doubt and negligent, but the USA then had six weeks to take strong action and did not.

“Only 1% of those infected will die.”

Well that number is actually closer to 5% (lower now nationally, more like 3% and was always lower in Florida FWIW) .

How many will get ill and have permanent problems?

No I don’t know that and the scientists don’t believe that. Why then are people dying in large numbers.

But we do have a flu vaccine. And do not forget that those killed often don’t have health insurance, but you don’t really care about that, do you?

“We need to reopen by Easter to save the economy”

Why? What happens if we reopen and the virus isn’t contained? A premature reopening will do more harm than good.

Me at the time: Maybe true. UK, Italy, Spain are all a mess. Per capita we’re doing better than them, I agree. But will they pull out of it faster because they have a long-term plan? That’s when we can judge (we now know the answer was they flattened their curves and then saw a steady reduction while the US is back at a peak and Florida has blown away the previous “peak” by a factor of four.

Also of note, at this point MAGA folks cited per capita numbers, which ironically would not matter when it came to testing.

“It’s like the flu. You get sick, you stay home. A week later you return to work”

Where to even start with this? It’s a respiratory illness that takes weeks to get over and unlike the Flu we have no vaccine!

“We have to reopen the economy. People need jobs”

Yes agreed, but we cannot reopen the economy and sustain it until we have consumer confidence  which depends on having enough PPE to go around, everyone using it and maintaining social distancing rules.

“The shutdown did more damage than the virus”

Ironic these sorts of statements come from those who identify themselves as “pro-life.”

Besides, the shutdown’s damage will be if we didn’t shutdown long enough initially and we don’t actually beat the virus now, don’t allow people to safely return to normal activities by the summer and end up overwhelming the system again with ill people.

Well guess what, come June, where are we on this?

“We have the most tests”

My response at the time was prophetic to this: I said, per capita we’re near the bottom among western countries right now. We’ll eventually overtake them though because they “test and trace” while we just randomly test and don’t trace or do anything organized or systematic. We’ll have to keep testing constantly for months.

Like with Climate Change, right-wingers have sought out the one or two studies that confirm their biases or agenda and have hawked them all over the internet. The vast majority of research indicates it does help. And even if it just might help, isn’t it worth it?

He’s a scientist not an ideologue like you or a politician who is not accountable to anyone but their donors. This is a new strain of H1-N1. As we learn more, he pivots. Besides your hero Donald Trump has no ideology nor set of guiding principles, yet he’s always correct, right?

“You owe Governor DeSantis an apology!”

Sure, I will be more than happy to give him one when we are past this, if we are in fact past it.

“Joe Biden is in hiding”

No he is being socially responsible. Like you should be. A Presidential candidate has no obligation to show up in public to placate a bunch of social media malcontents and paid trolls.

“Testing has gone up”

Actually testing has been roughly the same in Florida since late May. Some increases but not consistently. Some days we see HUGE dips in testing and then data dumps a day or two later. They cannot even organize this properly.

“Cases are going up because of increased testing!”

Yeah that’s why the positive % in most urban counties was sitting around 3 or 4% in early June but by June 20 was in double-digits and then in some counties like Hillsborough and Orange, over 15% by July 25.

“You are hyping Orange County numbers because you hate MLS.”

On this one, I admit I began hyper-analyzing Orange County numbers in late May because I cover MLS. But I wanted MLS’ restart in Florida to succeed, but within days of closely tracking daily numbers and testing realized things were looking ominous. Couple this with ill-advised decision to begin Phase 2 on June 5, by Tuesday June 9, I was openly saying MLS should consider restarting its season somewhere else. Since that day, Orange County’s situation has gone from ominous to dire. Unfortunately, because of this, I have to focus on it each and every day. I don’t hate MLS at all, just don’t like them playing in Orlando which has rapidly become an epicenter of the Pandemic, something that was utterly predictable a few weeks ago.

“You are sensationalizing Florida’s numbers to get attention.”

I was getting this commentary directed at me two weeks ago but suddenly it disappeared last week and certainly will not resurface anytime soon.

The median age of those infected has gone down, so yes maybe less are being hospitalized. But remember hospitalizations lag behind confirmed cases. So watch this space.

So with all of this now in the rear view mirror, what will the next piece of myopic spin be from the MAGA right?

← #FloridaCovidEpicenter: Conservatives show once again they do not understand economics
Leroy Collins at Selma and 1968 →