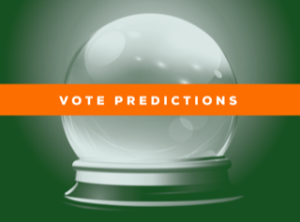 So, to start off, I have to admit something. I made a mistake yesterday. I accidentally took around 10,000 to 15,000 votes away from the Democrats in Lee County. An input error on my part. So, the Republican did not have as big of a swing as the model projected. They did have a swing actually, of around .15%, but not a massive swing. So basically, scrap whatever I said in that article. With that, I learned my lesson, and am triple checking my numbers when I input them.

That being said, for the first time in this election, Democrats have taken the lead in the vote projection model. With Palm Beach actually reporting somewhat correct numbers today (they are still a few hundred off from what their website says), and me not messing up in Lee County, we can see Democratic momentum. This is primarily because of the performance of South Florida.

Bottom Line: According to the vote projection model, a generic Democratic candidate would win 48.51% of the vote, while a generic Republican would win 48.46%, a small .04% gap. I cannot compare this to yesterday’s model because of the issues I mention previously

It is still a very close election. This election has always been very close. The reason I say this is because some Republican website used my numbers, saying that Florida was becoming a lost cause for Democrats. Nothing is further from this truth, and I want the readers to know that this model has shown in the last week that his was an extremely close race within the recount margin.

Details: Palm Beach, Broward, and Miami-Dade Counties continue to perform better for Democrats. Not only is the pre-Election turnout rate high, over 5% higher in all three counties compared to 2014, but the votes are more Democratic. We are seeing Broward County reaching a projected vote total of 70% for a generic Democratic candidate. The reason for this is because Democrats in Broward and Palm Beach are actually turning out, while Republicans are not. And while these are Democratic counties, there are thousands of Republicans in these counties. Their lack of participation is helping Democrats statewide, big time.

What to watch: While most counties have already surpassed their 2014 Pre-Election Day turnout rate, Pinellas County has not. In fact, it is 1.72% off of the 2014 rate. With this lack of turnout, it means there are a lot more undecideds waiting until Election Day to vote. This helps Democrats. Any campaign for either party should be putting a boatload of resources into Pinellas County in these last four days, as it seems there are still a lot of undecideds out there.

Here is a link to the latest projection model map.