Miami Hurricanes Men’s Basketball – a prouder tradition than many realize

November 1, 2018 · by Kartik Krishnaiyer · in Miami Hurricanes · Leave a comment 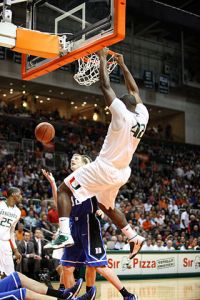 Editors note: We’re going to begin covering College Basketball this season at TFS in addition to some soon-to-come non-political features we’re adding to the site.

If I told you the University of Miami’s Men’s Basketball has finished a season in the AP Top 10 twice since the football team last did you might think I am crazy. If I told you Miami has recorded a winning ACC conference record in Men’s Basketball six of the last seven seasons, something the football program hasn’t done you might say I am even crazier (especially when realizing winning the ACC in  basketball in theory is much more difficult than in football, especially when you don’t play Clemson every year!). Isn’t the only good basketball in the ACC played on Tobacco Road?  How about mentioning the Hurricanes won an ACC Regular Season Men’s Basketball title AND making a ACC Championship game appearance long before they did in Football? Again, might be glossed over.

The reality is Miami, an urban private school in the nation’s perceived best basketball conference (not to mention the only major college conference college sports program in one of the nation’s eight largest metropolitan areas) SHOULD be a basketball school first and foremost and a football school second. But being in Florida, the focus has always been on football. This comes even though Miami’s best periods in Basketball over the last quarter century (from 1997 to 2000 under Leonard Hamilton and 2012 to the present on Jim Larranaga) have generally coincided with major dips in the competitiveness of the football program.

Miami’s Basketball program has always struggled for local interest and a piece of the media piece in a metropolitan area which now has over six million residents. The program was somewhat successful in the 1950’s and 1960’s (an era when Miami Football actually had some good teams as well, including several teams that finished ranked in AP poll)and sported Rick Barry a future Hall of Famer at one point. But the University didn’t have a home arena and games bounced around from venue to venue. In 1971 the program was dropped and Miami became one of the only (or perhaps THE only) University in America to play D-1A College Football and not field a Basketball program. Weeks before Miami won its first football national title in 1983, the Universities trustees voted to reinstate the men’s and women’s basketball programs beginning in 1985.

Because of the glamour associated with the area and the success of the football program the assumption was Miami would compete right away. In the program’s first year back they played Arizona on CBS and took the Wildcats to overtime. The next season highly-recruited Tito Horford arrived and for a few years Miami was being shown regularly on national television while playing a tough schedule that included the likes of Kansas, UCLA, Notre Dame, Georgetown, Marquette, DePaul and Duke. Miami was stuck playing in the James L. Knight Center, a 5,000 seat multipurpose facility in Downtown connected to a Hyatt Hotel on the Miami River.

In 1988, the Miami Arena opened and UM moved its games there and initially became fodder for bigger programs*. Duke’s Danny Ferry scored 63 points in one of the first games at the Arena and the Hurricanes who a few years earlier had looked like they might become a viable program, fell of completely. Without conference affiliation and no on-campus arena, the program was going nowhere, irrespective of the fact that the school boasted consistently a top 5 football program at the time.

Then everything changed – Miami was able to use the attractiveness of its football program to bargain its way into a conference – not just any league, but at the time perhaps the best basketball league in the country – the Big East.

For the first several years Miami was in the league, they simply couldn’t compete. But Coach Leonard Hamilton, slowly but surely began recruiting well in the northeast, taking advantage of south Florida’s climate. By the mid 1990’s the Hurricanes were competitive in the conference and by the late 1990’s they were the second best team in the league – behind UConn, a national powerhouse. In fact in 1999, Miami handed eventually national champion UConn its only full-strength loss, a 73-71 win in Stoors that was nationally televised on CBS. In the other meeting that season Miami had been beat in OT at home by UConn on a controversial call. Hurricanes Forward Tim James was named co-Big East Player of the Year, sharing the honor with Richard Hamilton of UConn. That Hurricanes team became the only Big East team EVER to beat St John’s, Syracuse, Georgetown and UConn on the road in a single conference season.

The next season Miami won the Big East. But following an upset loss in NCAA Tournament Sweet 16 to Cinderella Tulsa (who was coached by Bill Self), Hamilton left for the NBA. As we know he’d return to the state two years later to take over FSU and rebuild that proud program.

Hamilton’s departure to NBA derailed Miami’s progress. In the period from 1995 to 2002, Miami had third best overall conference record among Big East schools, trailing only UConn and Syracuse. But the school did not post a winning conference record in any league between 2003 and 2011.

Hamilton’s last act had been to land Miami’s best ever recruit at the time – Darius Rice. With Rice on the team and holdovers James Jones and John Salmons among others from the 1999-2000 Big East Champions, the Hurricanes should have pushed on. But new Head Coach Perry Clark was a bad hire. After making the NIT his first season and the NCAA his second (though I would argue both teams underachieved, as they were to that point in time the most talented teams IMO Miami had ever had), the Canes fell to unprecedented lows – the worst back-to-back seasons for the program in Big East play since joining the league.

The Hurricanes did move to an on campus arena finally in this period, the BankUnited Center (now Watsco Center). But the promised home court advantage from playing on campus did not materialize quickly.

The next year Miami had a new coach, Frank Haith and a new conference the ACC. The Hurricanes were more competitive in the ACC than they had been the previous two years in the Big East. But Haith was a poor coach and despite recruiting well and having Jack McClinton, one of the greats in school history fall into his lap (McClinton transferred from Siena when his Coach Rob Lanier was fired – he choose Miami because his High School teammate Dorell Wright was playing for the Heat), he made the NCAA’s just once in seven seasons. Miami did become a regular fixture in the NIT which wasn’t where the school wanted to be, but it was certainly better than where Clark left the program or where some other ACC schools were at the time.

Then came Jim Larranaga and an ACC Championship, an ACC Regular Season title, two top ten finishes, an NIT final loss in overtime and four NCAA appearances. Miami has finished in the top three of the ACC, acknowledged as the best basketball league in America, in three of the last six seasons. Over the course of Larranaga’s tenure, the Hurricanes have more wins against North Carolina and Duke (11) than any other ACC school except Virginia.

To say Miami has become a power in the ACC is not an overstatement. Six winning conference seasons in seven years is a record only matched by Virginia, North Carolina and Duke in the same period. Those are three perennial top ten programs. Miami’s ability to go away from home in the league and steal a big win regularly is also unlike many in the league who simply look to defend their home court and hope for a win or two away from home.

Under Coach L, Miami has landed over half its top 25 recruits in history. Some like Davon Reed and Tonye Jekiri have become four year stars for the program, while others like Bruce Brown and Lonnie Walker IV were so good they left early for the NBA, a problem Miami NEVER had prior to recent years.

Miami begins its 2018-19 season next week and this year at TFS, we’re covering College Basketball!