Does free speech include the right to boycott? It should… 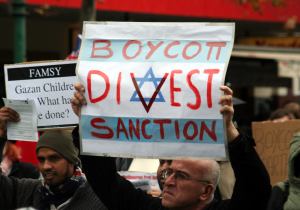 It was with some curiosity I read an article penned by two of the most courageous and intellectually honest writers out there – Glenn Greenwald and Ryan Grimm. The subject: proposed legislation by Senators Ben Cardin (D-Maryland) and Rob Portman (R-Ohio)  that would make it a felony for American citizens to join in any international boycott of Israel.

The legislation, S 720 the “Israeli Anti-Boycott Act) is being pushed by AIPAC– The American Israeli Public Affairs Committee which in the era of Likud rule in Israel has become incredibly aggressive with its lobbying activities in the United States.

Personally, I don’t agree with boycotting Israeli products. I bought a Soda Stream just last week and LOVE it – of course Soda Stream has been the target of boycotts by many in the out-of the-mainstream BDS movement (Boycott, Divest, Sanction), which has become popular on many American college campuses. BDS is funded by some extreme Muslim religious groups but also by NGO’s associated with the European Union among others.

So while I don’t support BDS’ rhetoric I find this legislation and the fact that 43 Senators (29 GOPers and 14 Democrats) have co-sponsored it frightening for four separate reasons I outline below.

As noted above I do not boycott Israeli products (I don’t boycott Arab products either). However, I do attempt to boycott goods from Sri Lanka as much as I can, given my own ethnic Tamilian background and the consistent human rights abuses by the Sinhalese government towards Tamilians, my people. My brethren were defeated in a long and costly Civil War that came to an end in 2009. The Sri Lankan government (run by Buddhists) regularly condones or turns the other way when Muslims or Hindus are the victims of violence.

Should the Sri Lankan government ever gain the favor and influence in the United States that Israel currently has thanks in large part to AIPAC, my freedom of speech and my right to defend my culture and my blood would be impugned in what is supposed to be the freest of nations. This legislation or even the concept of it starts us down a slippery slope we will never recover from.

I support Israel’s right to exist in peace. Israel is the only liberal democracy in the Middle East and the only nation in the region that has the type of social welfare system we should be emulating in the United States. However, that system and the general liberal tendencies of the nation were put in place before Likud achieved power in 1996 (looking dramatically different than the 1970’s and 80’s Likud) and Benjamin Netanyahu became the leader of the country. Much of BDS success in getting institutional support in Europe and underground/college campus support in the US has been a reaction to Netanyahu’s rhetoric, policies and general tenor. This is a reality that secular Jews in the United States MUST come to grips with and confront. I was proud to be represented in Congress for over a decade by Robert Wexler who despite his other shortcomings, was a Jewish-American who tried to steer a middle course on these matters. But in the era of Likudniks both in his district and in Washington it was almost impossible.

3- Being Anti-Israeli government is NOT antisemitism

Recently an absolute false equivalency and correlation has been made regularly in this country between being antisemitic, that is to be a vile racist person and being opposed to the current Israeli government’s policies in the occupied territories. This rhetoric is probably why so few in the Congress want to stand up to AIPAC and its Likudnik agenda in this day and age. If this legislation passes, I fear it basically codifies that opposition to the current Israeli government or any future one makes you an antisemitic racist in the eyes of US law and public opinion.

4- Foreign governments getting US politicians to do their bidding

It’s odd at a time when the Democrats as a whole are so obsessive about Russia, that anything the White House does automatically gets traced to Vladimir Putin that so many in the minority party are signing up to support this legislation. AIPAC’s involvement and other factors make it appear quite clearly that the Likud government is at the very least pushing this idea. This is after all the same government led by the same man, Benjamin Netanyahu who so blatantly disrespected our President, a Democrat just a few short years ago on his visit to Washington. Netanyahu’s address to Congress in 2015 broke diplomatic decorum and demonstrated a fundamental disrespect for our institutions of government, our protocols and our head of state. Yet the politicians outside of the Obama Administration by and large went along with it, sucking up to a foreign leader who was sowing seeds of discontent here domestically. If Vladimir Putin did that, we’d call it an act of war and many would demand military action.

I urge all our readers to check out The Intercept’s fantastic analysis of this dangerous piece of legislation and the types of precedents it could set.

← How will the Obama foreign policy be viewed with hindsight?
Flashback Friday: Eric Clapton in Miami and 461 Ocean Boulevard  →
Join 22,187 other followers