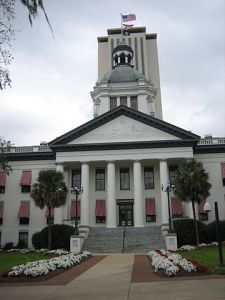 Following a redistricting process  in 2015 created by a legal victory, the State Senate suddenly appeared in serious play. The chamber which last had a Democratic majority in 1992 and which the party last held 40% of the body’s seat in 1998 became the focus of the Florida Democratic Party (FDP ) in 2016 – desperate for any sort of state-level success after having dropped 17 of the last 18 races for Governor and Cabinet.

Florida Democratic Party Chair Stephen Bittel told the Leon County DEC this week that the party according to the News Service of Florida that:

Despite “disheartening” losses in November that left Republican in control of the White House and the U.S. Senate, Florida Democratic Party Chairman Stephen Bittel said this week his party will bounce back — including winning state Senate seats in 2018. Speaking to the Leon County Democratic Executive Committee on Monday, Bittel said Democrats next year “absolutely” will win state Senate seats held by Hialeah Republican Rene Garcia, Miami Republican Frank Artiles and Tampa Republican Dana Young. Garcia cannot run again because of term limits, while Artiles and Young are freshman members of the Senate.

This is a hyper-ambitious expectation considering the Democrats last picked up three State Senate seats in single cycle in the early 1980’s. But Bittel must be given full credit for his gusto. The Democrats in Florida have been great at setting a low bar, the falling below expectations and either crying foul or complaining that the “game was rigged.” It is possible though Bittel doesn’t quite know what he is getting himself into – after all Florida Democrats have institutional disadvantages in all three seats the Chairman believes the party can win.

Before we get to each of the three seats let’s review another quote from the FDP Chairman again according to News Service of Florida:

Also, Bittel said if the national mood sours further toward President Donald Trump, Democrats could pick up five state Senate seats, bringing them to parity for the first time since the 1990s.

Tying pickups to national trends is unwise – Democrats have in each of the last three cycles under-performed badly in legislative races relative to the top-of-the-ticket. While it might be fashionable to blame the FDP for this failure (in some cases they do deserve blame, in others they do not) the harsh reality of state politics right now is that the Republicans have massive institutional advantages that often leads to enough ticket-splitters to swing marginal legislative seats to the GOP, while national Democrats carry the area. Perhaps Chairman Bittel has a formula for reversing this trend, which would not only be welcome news for Democrats, but for Floridians who have deprived of the basic multi-party competition that Democracies are allegedly supposed to provide its citizens. Florida has been a one-party plutocracy at the state level for close to two decades now.

If the FDP is to pull off the trick in 2018 they need to avoid draining resources and good will on intra-party fights, many of which have nothing to do with General Election politics. In 2016, per our sources the FDP either actively backed or encouraged allies to back candidates in four Senate primaries held in safe Democratic seats. While from an ideological and party-unity standpoint some of the forays made sense (like Randolph Bracy vs Gary Siplin), others were simply unwise playing in primaries. The FDP has a bad habit of using primaries to try and force loyalists into a caucus in what are essentially general elections. While from a policy perspective this is the right course of action, for a party with limited resources and institutional disadvantages, wasting time and effort in primaries isn’t wise.

Looking at 2018, the Democrats three major targets are the open seat that Rene Garcia (SD-36) is leaving, and incumbents Frank Artiles (SD-40) and Dana Young (SD-18). Quite frankly, the Democrats face a heavy lift in all three seats. While Democratic presidential candidates may have carried the Garcia seat recently, the vast majority of local officeholders in the area remain Republicans and the district has no history of supporting Democrats in legislative races since the 1980’s.

The Artiles seat leans Democratic every way you cut it and South Dade has more of a recent history of electing Democrats than Garcia’s area. But Artiles has the advantage of incumbency though the area’s Democratic base and trend line might make it a pickup opportunity. Still Artiles must be favored in this district.

The Dana Young seat is a perhaps shot-in-the-dark in 2018, though a better prospect down the road. The Tampa-based district is an area which typically performs much worse for Democrats in off-year elections (like 2018) and Young has a strong local base of support. The district favored Hillary Clinton by five points per The Political Hurricane, but young is adroitly adopting policy positions like a strong opposition to fracking that is bound to help her fend off a Democratic challenge. Still this is a district whose trend line is unmistakable and because it is in urban Florida, it will be a persistent Democratic target until it flips (much like the Palm Beach/Broward coastal Senate district which was aggressively targeted by the Democrats in 2000, 2002, 2008 and 2010 before finally flipping in 2012).

Bittel’s State Senate gambit is gutsy and if it pays off will usher in a new day in state politics. But the heavy lifting required to pull it off might prove to be beyond the means of Florida Democrats in 2018.