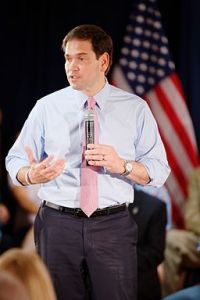 Marco Rubio is a charlatan. He’s the worst kind of deceitful devious politician. Some politicians don’t have any sort of belief system or ideology. That’s not a positive thing obviously, but what is worse is a politician that will or do anything to get elected  or to get public praise or attention, but has at his or her heart a strong set of dangerous guiding principles whose implementation would cause great harm for the people our our nation.

Neo-liberals and neoconservatives both love Rubio’s foreign policy positions and in the Senate Foreign Relations Committee hearing on the nomination of Rex Tillerson to be Secretary of State (SoS), Florida’s Junior Senator made it clear that he had problem with Tillerson’s Russia stands. Rubio’s line of questioning was consistent with his ideology – neoconservatism and showboating to draw national attention. It also served the purpose of making Rubio a hero albeit temporarily to Democrats and non-partisan voters who oppose anything related to Trump.

In reality, I believe Tillerson is probably the best Secretary of State nominee we are going to get out of Trump. The soft-spoken former ExxonMobil CEO has a global perspective that is more nuanced and moderate than that of other potential Trump SoS nominees such as Newt Gingrich, Rudy Giuliani or the incredibly dangerous John Bolton, a man almost certain to lead the United States into another foreign war. But that has little to do with Rubio’s behavior which continues a pattern of putting style over substance and ideology or partisanship over Florida and America.

But Rubio was never going to buck Trump in a damaging way when it came down to it. With the opportunity to kill the nomination of Tillerson, Rubio caved after massive pressure. For a man who depends on the affection of Republican Party insiders and operatives to continue to create a myth around him, the first days of a new GOP Administration wasn’t the time to do something irreparable.

So Rubio played the hero and closed ranks. Expect more and more of it the next four years as he plays all things to all people. Charlatan’s like Rubio and Joe Scarborough seem to grow on the Florida Republican tree with regularity. Rubio’s will no doubt remain relevant for the media and those GOP insiders that get so easily played by Florida’s Junior Senator or need a stalking horse for future political campaigns.