Jeb Bush claims to have a consistent “conservative” ideology. This week, he attacked Republican Presidential candidate Donald Trump for his ridiculous words about Senator John McCain, a former POW in Vietnam. But in Bush’s statement released via Twitter, he rightly indicated that all veterans deserve respect.

Enough with the slanderous attacks. @SenJohnMcCain and all our veterans – particularly POWs have earned our respect and admiration.

But considering Jeb Bush just ten years ago took another approach toward veterans, his hypocrisy is on display for all to see. Never before in the proud history of our nation had a draft-dodger been able to use an opponent’s military service AGAINST them. But that is exactly what George W. Bush did to John Kerry in the 2004 Presidential Election, thanks to the infamous “Swift Boat Veterans for Truth.”

Bush’s younger brother Jeb, serving in his second term as Governor of Florida not only approved of these slimy tactics but used his official gubernatorial stationary to express his gratitude. 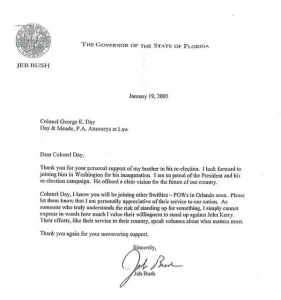 For Bush, the hypocrisy never ceases.