Thursday Bookshelf: My Generation of War and The Rising Trend Of Military Privatization

Authors Note: In addition to these books, please make sure you check out the latest from Jeremy Scahill: Dirty Wars

both the book and documentary that examine the “Obama Doctrine” in this new type of warfare involving drones,  and Restrepo

the documentary based on the book War by Sebastian Junger.

My generation is the new war generation. I’ve been on this earth since 1987, and  all I know is war. Every decade since my birth, this country  is in the midst of an armed conflict or military incursion somehere- be it the Gulf War, Panama, Bosnia, Somalia, Kosovo, Haiti, The Philippines, Somalia (Again), Iraq (again),  Afghanistan, thus my generation knows war. But after 9/11, war changed forever. Since that dreadful day 13 years ago, America’s concept of war changed. Pre-9/11 one would be able to tell the difference between war time and peace time. Now, thanks to the ever growing and expanding, global War on Terror, America it seems is in a permanent state of war- fighting an enemy without borders, uniforms, are fortified fronts. A state of war, that the world’s most powerful military force, was not designed to fight. But, as this war has dragged on, the American military has adapted, it has become more efficient, more automated, and yes, more lethal- all of which would not be possible without the new growing trend in American military spending- privatization.  My generation, the new war generation has seen recrod military and defense spending, more automation and privatization, all in the name of keeping America safe and taking the fight to Al-Qaeda and its allies/affiliates. Thus today, we announce the creation of another TFS Bookstore Secti0n: Foreign Policy and War (. Since the Bush Doctrine, the entire world has become a battlefield, democracy has been infringed upon, and the enemy isn’t a country, doesn’t wear uniforms, and is essentially, everywhere.

Today we add two books to our latest   Blackwater: The Rise of the World’s Most Powerful Mercenary Army [Revised and Updated], from world renowned investigative journalist Jeremy Scahill shines a big light on the America’s growing  addiction to using private military companies (PMCs) and mercenaries to perform duties reserved for uniformed military by examining the rise of a particularly infamous company- Blackwater, which has changed its name several times in the past, in effort to shroud the controversy surrounding the firm. The second, is a book you’ve probably already heard, as is it was eventually made into a full length documentary film. This book, War by Sebastian Junger, best known for The Perfect Storm is a first person account from Junger of what he saw as he was embedded with an infantry platoon stationed in one of the most dangerous places on earth- Afghanistan’s Kornagal Valley. Junger’s book was also the subject behind the full length documentary film Restrepo, named for a solider that was KIA while Junger and his photographer, the late Tim Hetherington (killed while covering the civil war in Libya in 2011) were shadowing the platoon. 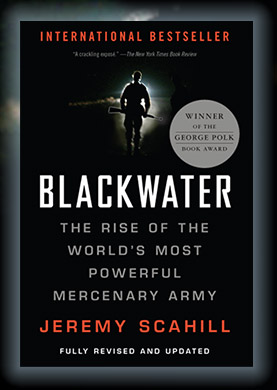 First, lets talk about Scahill’s book on Blackwater. Scahill, a reporter for The Nation had written at length about the unprecedented growth of outsourcing and privatization of the military in the post 9/11 world.  From his 4/2/2007 article “Bush’s Shadow Army” in The Nation: “From the moment the US troop buildup began in advance of the invasion of Iraq, the Pentagon made private contractors an integral part of the operations. Even as the government gave the public appearance of attempting diplomacy, Halliburton was prepping for a massive operation. When US tanks rolled into Baghdad in March 2003, they brought with them the largest army of private contractors ever deployed in modern war. By the end of Rumsfeld’s tenure in late 2006, there were an estimated 100,000 private contractors on the ground in Iraq–an almost one-to-one ratio with active-duty American soldiers.”

The legends and stories about Blackwater are infamous. Back in my undergrad days at Stetson University, my curiosity over the growing use of Private Military Companies (PMCs) by the Bush administration came to a boil in September 2007, when news broke of a mass shooting in Baghdad resulted in the murder of seventeen Iraqi civilians by Blackwater Worldwide contractors.  According to several media reports on the incident, a convoy of four armored vehicles manned by Blackwater personnel departed the heavily fortified and American controlled Green Zone approached the very busy Nisour Square intersection in downtown Baghdad. Over the span of twenty minutes or so, heavy gunfire was exchanged, more than three dozen Iraqi civilians were shot, seventeen fatally. One of the dead, was a nine year old, whom was caught in crossfire while riding a car driven by his father Mohammed Kinnani, whom subsequently sued Blackwater Worldwide.  One former Blackwater employee who witnessed the shooting, called the massacre “murder in cold blood.”

Why are PMCs so controversial? As you may know, this organizations, under contract from the US  Government do not have to adhere to the Uniformed Code of Military Justice (UCMJ) — the laws enforced by the US Military. Additionally, groups like Blackwater, do NOT have to adhered to the laws of the country they are operating in. Thus, as Jeremy Scahill outlines in this book, Blackwater and its competitors essentially are vigilantes that are not held accountable nor do they answer to anyone. One of the central tenant’s of democracy, is the government’s responsibility to provide for the common defense. As America’s continues to outsource its defense department and corporations like Blackwater (now known as Academi) see their power grow, does that mean or democracy will continue to erode, or is this trend simply the twenty-first century way of making America’s bloated military more efficient? That is the debate Jeremy Scahill, delves into here, as he pulls back the curtain on America’s most infamous PMC, covering Blackwater’s rise from a small security firm founded by Eric Prince, into President Bush’s most trusted Defense contractor not named Halliburton.

The explosion of PMCs in American war zones, is a perfect pairing for the next book added to the TFS Bookstore today- WAR

Sebastian Junger. While Scahill’s book examines the rise of the sectors role in modern warfare, Junger’s reminds us of the horrors of war as he gives us a first person account of life in Afghanistan’s Kornagal Valley as a an infantry man stationed at the remote Forward Operating Base (FOB) Restrepo.  This book does NOT explain the motives for going to war, the politics of Afghanistan, or that of the Taliban or the Afghans in general. So if you are looking for another lefty, anti war themed book,  to reinforce rhetoric of a similar nature this book is not for you. What it does is paint a picture of what life in the KV at FOB Restrepo is, as Junger describes it, “sort of the Afghanistan of Afghanistan- too remote to conquer, too poor intmidate, too autonomous to buy off.  In other words, the base is so remote, its supplied by helicopter, and worse, surrounded by armed enemies itching to get inside.

Junger and his partner Tim Hetherington are embedded with the second platoon of Battle Company, 173rd Airborne Brigade, and their book serves as an account of the human condition and the toll of constantly living under the threat in a war zone takes on the psyche of soldiers.  He describes the second platoon FOB, so perfectly that you feel like you are right there with him:

Its a miraculous kind of anti-paradise up here: heat and dust and tarantulas and flies and no women and no running water and no cooked food and nothing to do by kill and wait. 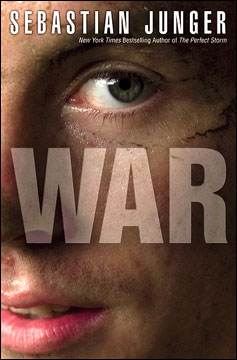 As they understood the Kornagal Valley (KV), the area was essentially a intersection used by Taliban fighters to travel across the country while engaging with Coalition forces.  But what they didn’t know was how active the area was. The KV was seeing a ridiculous large proportion of the fighting. Junger puts it into perspective: Battle Company, a mere 150 out of 70,000 NATO troops in country, were experiencing one-fifth of all the fighting nationwide.  That alone, should give you a glimpse of how action packed the book really is, and how War is always hell.

I paired these two books together for a reason. Scahill gives you a glimpse into the world of paid mercenaries- soldiers paid a small fortune to do the jobs reserved for the young men in Junger’s book, except Junger’s men serve long tours, in remote areas, for less money, and have their lives changed forever. After reading both of these books, my mind continues to ponder the following questions: are PMCs like Blackwater bad for democracy and foreign relations or are they the key to reforming the military as the soldiers in Junger’s book find themselves fighting an enemy their Amry was not designed to fight? Most importantly, why aren’t we as good of care  of our soldiers as Blackwater does of their mercenaries, who, go to places like the KV, and Fallujah and see their lives changed forever as described by Scahill and Junger? My generation is undoubtedly, the new generation of permanent war, where peace time seems to be a myth, the question is, what will my generation do to change the culture?

As always, thanks for reading, and I hope you’ll pick up both books and join the conversation.