Precinct analysis: What is happening in Broward? 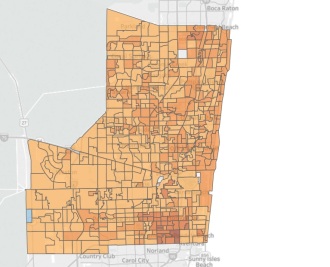 (IMPORTANT NOTE: Since the writing of this article, I have been able to look at the numbers in the Congressional races in Broward County and compare their undervotes with the Senate undervotes (something, admittedly, I should have done sooner). The same issue is happening in these Congressional races as it is in the US Senate race. Therefore, there is an issue with the ballot and placement of the race. With this discovery, it was important to update this post to provide exact clarity on the issue. However, we will keep the original post online. You can read the article if you like, but this information makes the argument somewhat obsolete.)

Yesterday, the vote in the US Senate race in Florida took an unusual turn. Governor Rick Scott threatened to shut down the counting of votes in Broward County, going so far as to bringing in the National Guard, and is asking for an investigation into the Broward Supervisor of Elections office. But why? Scott, known for being calm and collected, even during times of natural disasters, turned venomous when talking to reporters yesterday. And with the big advantage that Scott is getting from Broward County, he sounds more like someone who is paranoid than someone who is worried about voting integrity.

As was reported yesterday by the Miami Herald, there is a huge gap between votes cast in the US Senate race compared to the Florida governor’s race in Broward County. As of last night, the gap was roughly around 24,000 votes. There were also undervotes in 576 of 577 precincts in the county. This accounts for about 3.5% of the votes in Broward County. That doesn’t seem like a large number, until you realize that is also accounts for 73% of the undervotes statewide. That is a big margin!

And again, because Broward is 73% of the undervotes statewide, this would mean that this phenomenon of skipping the US Senate race would be unique to Broward County voters. So far, nothing seems to indicate, in political polling or on-the-ground information, that there was any massive anti-Nelson movement. Basically, the Nelson undervote is the largest third party in Broward County.

Another thing that is interesting is that number of undervotes in the 24th Congressional District are much higher than the rest of the county (as you can see on my map of the voting abnormalities in Broward). Some might argue that the reason for the undervotes is that Frederica Wilson was not on the ballot. This could have changed the positioning on the ballot of the US Senate race. If anyone knows, please get in touch with us.

However, if you cross the border into Miami-Dade County, the issue goes away. For example, Broward precinct Q081 had a 112 undervote difference between the US Senate and Florida Governor’s race, or a 11.37% drop, one of the highest in the county. However, cross the border into Miami-Dade County, to precinct 256, and there were only two undervotes, which is .14% of the votes in that precinct. Why does this discrepancy in the US Senate race particularly target an extremely high Democratic part of the county within one specific congressional district where the race for that congressional seat isn’t even on the ballot? And why does that abnormality stop at the county line?

Of course, some may say that there might be an issue with the machines. This is probably the most common excuse that will be made. However, that really does not hold water. First, this would require all of the machines to have an issue with counting ballots. And second, this would require that the machines only had an issue with about 3.8% of the votes for US Senate while also not having any issues with all of the other races. This argument is also transferable to issues regarding the ballot; why would the ballot not be valid for only 3.8% of the US Senate vote but work in all other races? And if the ballot wasn’t valid, why was the abnormality not specific to a geographic location? If there was an error in 3.8% of the Senate vote, why wasn’t there an issue in all of the Senate vote? Why was this 3.8% so unique and why were these issues unique to the Senate race?

Now, I am a progressive. I’m into science and practice political science. I don’t have time for Big Foot or Who Shot J.R. conspiracies. Still, the abnormalities in Broward are interesting. They are interesting because if a campaign, or a party, or another entity, wanted to target an election, this would be the way to do it. Instead of having all the votes missing in a handful of Democratic precincts, like the 2006 Vern Buchanan vs. Christine Jennings race, just skim off 1% to 5% in every precinct throughout the most Democratic county in the state. This doesn’t make it seem like a big issue, especially when it is only around 3.8% of the vote countywide. But that is roughly 24,000 votes missing from the state total, a vote that probably strongly favors Bill Nelson (especially in the 24th District, which was targeted the most). This seems like an issue that wouldn’t happen at the front end, but at the back end. When it happens at the back end, it is probably because someone is trying to manipulate the results.

Add all of this to the fact that Governor Scott has been acting abnormal and paranoid (a deviation from his normal behavior), and wants the counting to stop specifically in Broward County. Is something being hidden here? What exactly is going on?

Again, I am a political scientist, I deal with facts. But I did want to present these facts, as they do paint a picture of something quite sinister. Maybe it isn’t the Broward Supervisor of Elections that needs to be investigated. Maybe it is someone else.