October 5, 2018 · by Kartik Krishnaiyer · in National Politics · Leave a comment 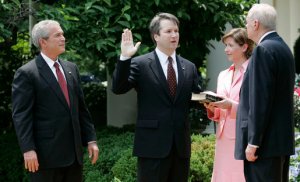 Swearing-in Ceremony for Brett Kavanaugh to the U.S. Court of Appeals for the District of Columbia. Oval. Rose Garden.

Judge Brett Kavanaugh’s indignation which was on full display for the world to see last week at a special Senate Judiciary Committee hearing was about his vision of America and the United States’ he’s lived his life in. It’s a country where entitled prep school educated males who go to Ivy League schools and are part of connected college fraternities can look down on everyone else and never face the sort of accountability a truly meritorious society demands.

Kavanaugh whose profile fits the modern Republican Party to a T, far more than Donald Trump exemplifies what the GOP has become. With this in mind it is no surprise Kavanaugh’s nomination and the subsequent multiple credible allegations against him have united Republicans, from Trump populists to globalists to Never Trumpers the same way taking down Bill Clinton did in the 1990’s, and any mention of tax cuts on the richest Americans does – Kavanaugh IS the Republican Party far more than Trump could ever hope to be.

What exactly is Brett Kavanaugh’s America? Here’s a primer:

My colleague Brook Hines had wonderful piece on the Kavanaugh allegations and Trump’s legitimacy yesterday. I’ll throw in another comment on legitimacy. Trump lacks legitimacy among many establishment Republicans – the same ones who cheered George W. Bush’s stealing of the the 2000 election and his initiation of foreign conflicts that killed hundreds of thousands of people based on manufactured lies. Trump’s clearest path to legitimacy among establishment GOPers and uniting his party before the midterms was to nominate the GOP’s poster child, the most prototypical entitled, frat-boy esque Republican and then stick by him when the almost predictable allegations of sexual misconduct and drunken behavior followed. The GOP establishment loudly cheered Kavanaugh’s indignation while his allies smeared and shamed victims and survivors of sexual violence. This is politics 101 even in the #metoo era for so many in and around power in both parties, sadly.

That long-serving GOP Senators like Charles Grassley and Orrin Hatch have defended Kavanaugh as strongly as they did Clarence Thomas in 1991 when Anita Hill’s allegations surfaced showed that in this #metoo world most of us live in, the entitled class of office-holding Republicans continues to live in another world of white male establishment privilege. That many Democrats have too covered up or run from allegations of sexual harassment or violence against women shouldn’t give anyone comfort -politicians in both parties act a certain way when it comes to their own vision of entitlement and protecting cronies.

Trump’s legitimacy will never be solidified among half of the nation’s leadership. But among the other half who cheered George W. Bush on and who worked tirelessly to undermine Bill Clinton and Barack Obama, embracing Judge Kavanaugh was surest way forward. Trump’s taken this path and has sent America into further chaos domestically and disrepute internationally.