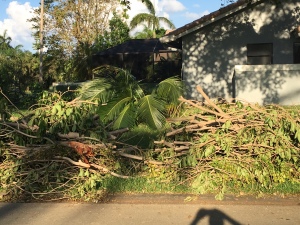 Last night as a gusty tropical disturbance pounded southeastern Florida, my power went out again for the fourth time since being restored five days after Irma sideswiped Broward County with sustained Tropical Storm force winds and Category 1 Hurricane-force gusts. Down the road about 10 miles in Fort Lauderdale, a colleague of mine returned home to a house without power scuttling our efforts to record a critically-timed soccer podcast in advance of this weekend’s NWSL playoffs which features the Orlando Pride and the US Men’s National Team qualifying match against Panama in Orlando.

What I personally have found since the end of Irma is that it is unwise to rely on power being a permanent feature and that my professional life remains disrupted – as perhaps it should since “normalcy” remains an enemy of the average Floridian. Three times while I have been working on projects with someone else my power has gone out since it’s post-Irma restoration.

We’ve editorialized repeatedly about infrastructure issues in this state that were tested and exposed by Irma’s wrath. Now we’re finding the utilities companies like Florida Power & light (FPL) who were under the gun to restore power quickly to residents thanks to media pressure and the shut down of most of the state for business, probably did things too quickly – but can we blame them? With the news reporting “restoration rates” as an implied absolute sign of recovery, FPL, Duke Energy, TECO and the other power companies in the state realized doing things quickly and perhaps half-asked was smarter public relations than admitting it would take weeks to restore power in some areas. Perhaps this isn’t the fault of FPL and other other utilities – they are just taking what the politicians bureaucrats and media give them.

More than three weeks after the storm as Southern Florida is being battered by a Tropical Disturbance and the Panhandle might have to worry about Nate, the clean-up hasn’t been completed. In Broward County, if you drive from the western part of the county to Fort Lauderdale Beach, you’ll see piles of trash, storm damage off the side of most roads, isolated and waiting for pick up by contractors. Had the area been hit with a quick succession of storms as we were in 2004 thanks to Frances and Jeanne, an absolute disaster would have occurred. While officials, particularly in Broward County have been full of excuses for this actuality including blaming neighboring counties for poaching contractors, their poor planning and lack of preparation is the actual culprit.

While those who have criticized my post-Irma editorials have claimed it is disingenuous to compare Florida’s experience with Irma to that of a Developing County, I disagree completely.  I was in Chennai, India during the Boxing Day 2004 Tsunami which ravaged the region. Power only went out briefly and within three days most of the damage was collected. In 2005’s Hurricane Wilma, Mexico’s Yucatan Peninsula was battered by sustained Category 5 force Hurricane winds for 18-24 hours. The storm then impacted Florida as a Category 3 for the southwest coast and a category 2 for the southeast coast. It was noted at the time by observers that Mexico was able to restore power and clean up areas more quickly than southern Florida where certain functions remained disrupted for weeks.

Irma has now killed unofficially 76 people in the state, the highest death toll of any Florida storm since the 1935 Labor Day disaster – the strongest storm in the recorded history of the United States. Authorities who have wanted to move back to the comfortable life of political posturing and easy ideological issues have shortchanged Floridians and have once again not held the hardly-regulated utility company’s feet to the fire on the reliability of their restoration equipment. Other politicians have moved back to easy partisan issues and talking points rather than using this storm and its aftermath to discuss ideas that should be commonplace – like solar (my solar lamps have saved me each time the power has gone out since Irma), climate change defenses, overdevelopment and better evacuation routes.

Florida isn’t close to actually recovering from Irma and perhaps that’s a good thing – we must take the opportunity to have the discussions on serious issues that impact the state’s sustainability. Otherwise, we will all pay for it again the next time around.