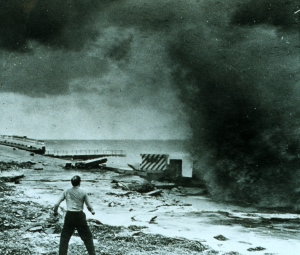 Man dwarfed by surf near Miami in 1947 Fort Lauderdale Hurricane- By Employee of the U.S. National Oceanic and Atmospheric Administration

Seventy years ago this month a Category 4 storm slammed into southeastern Florida. The storm since referred to as the “Fort Lauderdale Hurricane” approached the southeast coast of the state as a Category 5 but weakened to a strong Category 4 just offshore around Bimini.

The storm killed only 17 people in the state far fewer than feared for a storm of its size and scope. This proved a welcome change from the disastrous run of storms Florida had been on in terms of human loss of life between the 1906 Keys storm and the 1935 Labor Day hurricane. In that period the 1926 Great Miami storm, the costliest in American history (when adjusted for inflation) and the 1928 Okeechobee storm the second deadliest in US history occurred.

But unlike similar storms in the 1920’s it proved little match for an area more Hurricane-prepared and with stronger building standards. While the storm produced similar winds to the 1926 and 1928 storms locally it didn’t do anything remotely near the damage.

Improved construction standards and warning systems worked with the Fort Lauderdale Hurricane and reduced the death toll. During the depression south Florida’s building code had been toughened. Additionally Lake Okeechobee’s dike’s had been strengthened following the tragedy of 1928 – the 1947 hurricane remained perhaps the biggest test of Lake Okeechobee’s flood control system though in 1964, Hurricane Cleo’s eye had moved just east of the Lake, its rainfall total was much lower than the areas along the coast. The walls had held though it was a close call with waves reaching 26 ft at some points and almost breaching the walls. Eventually one small portion of the dike near Canal Point did collapse after the storm due to flooding. This might have been a result of flood waters from other points being pumped into the lake.

Evacuations in advance of the storm all over the region filled up hotels in Melbourne and Daytona Beach. Floridians were more aware of dangers posed by Hurricanes and prepared more than anytime in the past. Given the enormity of the storm, the small total of 17 deaths speaks volumes as to how prepared the region was.

However, flooding was still prevalent. Fort Lauderdale, Pompano Beach, Delray Beach and Miami Beach all had flooding problems. Delray Beach lost over half its trees and the tide washed out A1A between Palm Beach and Boynton Beach. The New River overflowed its banks and Biscayne Bay rose by about six feet. Broward County lost over 30,000 citrus trees and every vegetable bed in what was then a more agriculturally dependent county than today.

The unnamed storm has taken the historical name “Fort Lauderdale Hurricane.” Nonetheless it is the last hurricane to have directly hit New Orleans, which it did as a Category 1 with the eye passing directly over the business district of the city. Much like Betsy, Andrew and Katrina, this storm followed a path where it impacted both the southern portion of the Florida peninsula and Louisiana.