India and China headed toward possible war: Why India cannot back down 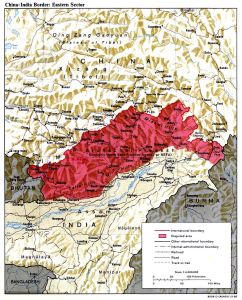 In the Trump obsession that has defined American politics across the spectrum for the last 26 months,  it has been hardly noticed on our TV news that the world’s two most populated nations are coming closer to war. For a full update on what is at stake and the basis of the current dispute here is a handy and concise article from the  New York Times.

India has had problems with China since independence in 1947. As India celebrates 70 years of being independent this month (and less gloriously 70 years since the horrors of a partition of the nation imposed by British to satisfy Muslim leaders and led to deaths of an estimated 1,000,000 people one of the world’s greatest humanitarian disasters) it faces a diplomatic and foreign policy crisis far more serious in a geopolitical sense than the border disputes revolving around Kashmir with Pakistan where objective observers can see India as the aggressor (but also likely see India as the more stable and rational actor at least in the post-Cold War world). Certainly India’s continued governance of Kashmir was one of the triggers on the rise of Osama Bin Laden as that conflict served as a rallying point for Jihadists globally. But beyond this, Kashmir is largely a regional dispute that doesn’t have larger geopolitical implications. However, the current crisis with China is very critical in a macro sense.

China represents a global superpower and regional bully. Having gained hegemony both economically and militarily over East Asia, China has now turned its attention toward South Asia, India’s backyard. While some word argue, perhaps correctly that India represents a bit of a regional bully itself but when you consider Chinese aggression, only India in the region can provide an adequate buffer.

The Chinese benefited from the idealism and naivety of Jawaharlal Nehru. India’s first Prime Minister believed the People’s Republic of China (PRC) after 1949 represented an Asiatic ally with similar socialistic economic policies and similar experiences with western imperialism and governments that were tools of the west.  If the PRC were an honest actor, Nehru would have been correct and an Sino-Soviet-Indo alliance could have provided a bulkwark against western imperialism and Anglo-American Cold War era aggression. However, Mao’s China was not an honest actor and would eventually drift into closer alliance with Pakistan and by extension the United States than with the Soviet Union or India (few remember today that the genesis of Nixon/Kissinger and Mao’s initial alliance in 1971 was support of Pakistan and opposition to India who was backed by the Soviets- this led directly to Nixon’s 1972 visit to Beijing. The United States has no dog in the Indo-Pakistani war and many Americans including Senator Ted Kennedy publicly supported India’s efforts to  help East Pakistan’s attempt to become independent. But Nixon was determined to win Mao’s favor and it was made clear through diplomatic back channels that open support for Pakistan was a key element to bringing about an understanding between the PRC and the USA. In retrospect if India had not won this war in 14 days, a larger World War might have ensued.).

By the time the triple alliance of Pakistan, China and the United States had been formed to squeeze India, Nehru had passed away and his daughter led India into even closer alliance with the Soviet Union – but not before Nehru allowed the Dali Lama exile in India and then got caught flat-footed as the Chinese invaded India as the world was distracted by the Cuban Missile Crisis in 1962, humiliating the Prime Minister and his nation in the process.

Had Nehru been less naive, it’s possible China never would have forcefully crushed the Tibetan rebellion in 1959 leading to the Dali Lama’s exile, nor perhaps would that have annexed the region in the first place while India turned a blind eye. In reality, Nehru invited the PRC into India’s backyard and the time has come more than a half century later for this situation to be addressed.

The situation that Nehru left India in was one of potential Chinese and by extension American domination over India. This continued into the 1980’s when both countries generously armed Pakistan and the Mujaheddin. Eventually India and Iran backed the Northern Alliance and after 9/11, the United States joined this cause and the Taliban was ousted in Afghanistan. No state opposed the Taliban Government in Afghanistan as vigorously as India did, but prior to 9/11 the United States and China seemed content to let the Taliban and Bin Laden run wild. But during this period American conservatives and neoconservatives were beginning to see India as a potential bulwark against a rapidly emerging rival to American global hegemony in China, as well as an ally against Islamic terror. The American right began to make common cause with India. Meanwhile, Israel became for a time the second largest supplier of military hardware to India behind Russia. The George W. Bush years cemented a deep alliance between India and the United States as post 9/11 considerations in addition to the growing aggressiveness of China necessitated the move. This has given India a self-confidence to act internationally as a continued ally of Vladimir Putin’s reemerging Russia and as a nation that at the very least has the (assumed) tacit backing of the United States.

Today, China is making moves to weaken India in the most subtle but effective ways. It can be argued that India is encroaching on what China claims is its territory (which is also claimed by Bhutan). But at the same time China’s moves are wholly provocative. The idea of building a road in the Doklam area is likely designed to eventually further isolate India’s northeastern states which are culturally and demographically different than much of the rest of the country. China continues to claim the Indian state of Arunachal Pradesh (area in red on graphic) as part of Tibet. Linking Dolkam and Arunachal Pradesh appears to be China’s ultimate goal, along with control of the headwaters of the Brahmaputra River. Control over water is the hidden hand behind Sino-Indo disputes as well as the Kashmir conflict.

Since the 1970’s India has become more aggressive in creating buffer territory with China. In 1975, India annexed the previously independent kingdom of Sikkim which is right on China’s border. The PRC has never recognized this as legal though a popular referendum was held. Around the same time India strengthened it defensive pacts with Bhutan which is at least ostensibly the rationale for Indian troops to be currently sitting on territory claimed by China bit not by India.

The issue of imperialism is always one that drives Indian’s elite ruling class. Having been a victim of British imperialism, Indian leaders are often overly sensitive to any encroachment into South Asia. While China isn’t the west, the Chinese have demonstrated a contempt for India in the past. Unfortunately, India CANNOT back down in the face of Chinese imperialism and aggression this time around. The territorial integrity of our neighbor Bhutan is worth fighting for if diplomatic options have been exhausted. War between nuclear powers can have terrible consequences but the Indians cannot stand down in the face of these clear provocations.  It is worth nothing that this dispute is again showing the absolute uselessness of the multilateral institutions like the UN so many in the west put faith in. When it comes to reigning in a major power like China they are completely impotent. Perhaps the UN will step in some time soon, but it appears unlikely.

While to many the west India is an emerging power and Indian culture and cuisine is popular, China and the Chinese never miss a moment to subtly give  India the back of the hand and imply the is insignificant, inferior and quite frankly don’t matter. While I historically have NOT supported Indian aggressive action towards Pakistani’s, whom I consider to be my brothers and sisters despite religious differences, but do support taking a stronger stand towards China. If India does not respect itself in this matter, you cannot expect China to respect India, and these sorts of provocations will not end. So India absolutely cannot back down in this matter.

The traditionally hyper-patriotic Indian media is banging the war drums once again – this time unlike most of the disputes with Pakistan where this furor is unjustified, in this case it is wholly needed. But the question remains will the media distinguish between how this and the equally provocative Indian actions toward Pakistan in the future? Probably not. The bottom line remains when diplomatic options are exhausted, India should be prepared to do battle with China militarily.