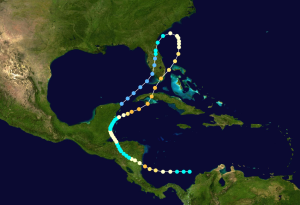 In October 1906 the Florida Keys was struck by a major Hurricane.

Though not as famous as the Great Miami Hurricane (1926), Okeechobee Hurricane (1928) or Fort Lauderdale Hurricane (1947) or as intense as the Labor Day storm (1935) this Hurricane made its unfortunate impact on the state. The storm which first barreled into the Keys and made multiple Florida landfalls.

Wikipedia describes the meteorological history of the storm:

The system weakened into a tropical storm by October 14 but restrengthened into a Category 1 hurricane by October 16. As the hurricane began to turn northeastward, it continued to intensify, attaining Category 3 status by October 17.[11] The hurricane continued to approach Havana during the day, and the hurricane’s center passed east of Havana during the evening. The following morning, the hurricane was located over southern Florida moving northeastward, and passed east of the coast of South Carolina.[1] The hurricane began to weaken as it was forced to curve south-southwestward,[11] striking Florida again as the result of a high-pressure area.[1] The system eventually weakened to a tropical depression over Florida, and traced southwestward into the Gulf of Mexico. On October 23, the remnants of the hurricane struck Central America and dissipated on October 23.[11]

It was a bad storm no doubt but in terms of winds or storm surge far from the worst to hit Florida in the first half of the 20th Century. This Hurricane however is remembered for other reasons.

WARNING: The portion of the article “below the fold” contains graphic images. 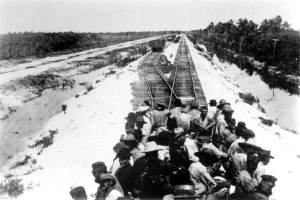 This storm killed over 200 people in Florida, most either on the Florida East Coast Railroad or at ships close to the coast. The FEC line that Henry Flagler had painstakingly worked to build opened up the Florida coast for development but also made storms even more dangerous in the primitive days of Hurricane forecasting and warnings.  The storm cost at least 104 FEC workers their lives due to accommodations on the water that weren’t suitable for withstanding tropical weather.

This storm led to better accommodations for FEC workers, better storm warnings for those at sea off the coast and ultimately to slightly stronger building restrictions.