The Divine Right of the DNC – Part 3, DNC lawsuit 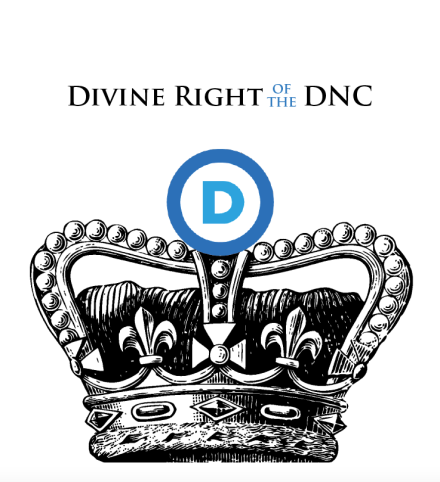 The DNC fraud lawsuit could be our last chance to reclaim Democracy for the voters.

If media bothered to report on the hearing to dismiss, we’d all know the situation is more dire than anyone imagined. In the meager coverage the story garnered, it’s been firmly established that the Democratic Party has lost touch with voters. But, given their theory of defense, I’m beginning to wonder if the DNC hasn’t lost touch with reality.

Lawyers know that sometimes you go to court with “bad facts.” I believe that’s the case in this hearing to dismiss.

So, how bad were the DNC’s arguments, anyway?

The DNC’s proposal that it can seek donations on the basis of imparitiality, without any obligation to actually be impartial, is only half of their problem with its logic. The other comes when the DNC goes on to claim a quasi-sovereign immunity to civil suits by somehow amalgamating its status as a “private entity” with its public business of nominating political candidates.

Spiva uses a subtle approach to achieve this. In the transcript this assertion reads more like PR than a legal argument because he uses the tactic of “association” to insinuate similarity without coming right out and making claims he can’t back up. In PR we call this a “halo effect” or a “smear” depending on whether the association is positive or negative. He dismisses the plaintiff’s standing to bring a fraud suit by invoking the special status of “political parties and political principles and debate.” In his case law citations, none of the examples relate to fraud pertaining to the integrity of the primary process itself.

The DNC seems to be trying to cover the stink of fraud with the fragrance sovereign immunity. The old saw “You can’t sue City Hall” refers to the principle that: The state/sovereign cannot commit a legal wrong and is therefore immune to civil suit or criminal prosecution. It’s like the DNC thinks it can create a hybrid, political immunity that allows it to be both a secretive private entity, and an arm of government that can’t be held liable for lying to the public.

By now everyone aware of the case is familiar with Spiva’s argument that the DNC “could have voluntarily decided that, ‘Look, we’re gonna go into back rooms like they used to and smoke cigars and pick the candidate that way.’  That’s not the way it was done. But they could have. And that would have also been their right.” He continues, “and it would drag the Court well into party politics, internal party politics to answer those questions.” But why would that follow when any other “private entity” would have its internal processes examined when fraud is alleged. The DNC is not the government, but implies that it is, kind of, when it comes to immunity from liability.

The DNC’s claim skips so many beats required for legitimacy that it evokes the Divine Right of Kings. Political parties, in DNC’s estimation, are magically self-legitimizing, shapeshifting cryptids. As private entities, they’re not transparent or accountable. But at the same time, as sort-of public entities, parties and the entities that run them are also immune to liability for fraud.

The DNC first asserts that private entity status protects them from people getting all up in its business. Spiva says, “Yes, they play a big role in the election of the president of the United States. But they are still private associations. They still have a right to order their own affairs.”

Does the DNC believe it can’t order its affairs without committing fraud? At this point it’s a serious question.

Whether or not anyone can tell the DNC how to “order its affairs” is not at issue. This lawsuit is based on civil fraud. To this, Spiva argues that there can be no fraud in the political waters the DNC treads, because, well, everyone knows politics is balderdash and codswallop in equal parts, right? And it’s all protected by the First Amendment, by the way.

Deceit is not protected speech. And it doesn’t become protected because it’s the SOP for a business entity. If that were the case, organized crime syndicates would employ every First Amendment lawyer in the country.

The DNC has a rule it has communicated publicly, that specifically promises impartiality. To this, Spiva argues that the DNC’s rules are kind of meaningless because, as a “private entity,” it could change them at any time. And who would know? Further, this fascinating snarl of

contradictory arguments goes, holding the DNC accountable to its own rules or public claims of impartiality would be an unfair meddling in private business. Impartiality, Spiva explains, is a “discretionary rule that it [the DNC] didn’t need to adopt to begin with.”

So apparently there is a Schrodinger’s Cat quality to the DNC’s rules. There is no way to know in what state a given rule exists. The rule could be followed…or not. Perhaps the rule didn’t exist in the first place. Perhaps it occupies all states at once. Perhaps the DNC exists in a post-truth quantum vacuum, and we just can’t dig their spooky action at a distance.

It should be clear why the DNC adopted a rule they had no intention of following. Impartiality is the basis for the DNC’s legitimacy. Without it, no one would participate in primary campaigns or give money. It’s the plaintiffs’ basis of fraud: misrepresentation and unjust enrichment.

If it truly makes no difference whether impartiality is in their charter, they should have omitted it. It’s fraud to say one thing and do another in order to keep billions of dollars in donations.

Spiva knows this and backtracked clumsily: “in response to my hypothetical that the party could choose its nominees in a smoke-filled room, I want to just reiterate that the party ran the process fair and impartially, and does not do that and doesn’t plan to do that.”

On the matter of jurisdiction, the DNC asserts it has a First Amendment freedom to lie its ass off. Co-opting the public function of the primary process, you see, means the DNC is entitled to the immunity from civil accountability the government enjoys. Because apparently the First Amendment says so. So per the DNC, really one cannot be held accountable for the integrity of the primary process.

He’s been required to invent a novel theory based on an imaginary public/private class of organization that’s isn’t required to be transparent, can’t be held accountable, and are free to lie, cheat and steal despite rules promising “evenhandedness and impartiality.” This fractured fairytale allows donations to flow freely.

Even more drool-on-your-face unhinged is the reality that this is how things have been working in America for years now, reaching a peak of absurdity in the 2016 Presidential primaries. Our political system has been allowed to depend on the DNC and its Republican counterpart to effectively administer democracy as they see fit. In the language of private entities, they have a monopoly. There’s no other viable avenue for we, “The People” to seek representation. We either fix this, or face the fact that elections will be corrupt forever, going forward.

No one would give time or money to an organization that rigs elections. Voters would turn their back, and the grassroots would shrivel and die. We know this for a fact because it’s happened before.

At the 1968 Democratic National Convention, the national party kicked aside the voters who had chosen anti-war Eugene McCarthy and installed pro-war braggart Hubert Humphrey. This quintessential “smoke-filled room” decision gave rise to riots and ultimately led to crushing defeats for the Democrats. Nixon won in an electoral college landslide, while squeaking by in the popular vote. Sound familiar?

When Democrats retired to smoke-filled rooms in 1968 we got Nixon. In 2016 we got Trump.

Running the Democratic Party like an elite private money-collecting club, although understandably an attractive proposition if you happen to be in the club, is self-defeating. There are far more workaday voters than George Clooney fundraiser attendees, and at the end of the day, money can’t overcome the votes of people who can’t trust an organization that claims the right to lie to them.

At the hearing to dismiss, attorney for the Plaintiffs, Jared Beck offered a compelling argument for why the DNC is unlike a “private association.” In our 2-party democratic system, he says, the parties have “custody over the market for how candidates are chosen and elected and nominated and ultimately run in general elections.”

There is no other alternative. The party controls every aspect primary elections, minus counting the ballots.

Beck makes mincemeat of the DNC’s claim that the lawsuit is wildly different from fraud cases, saying, “the shareholders in this case…bought into this political process, because…they believe in American democracy and that we live in a democratic system. And they bought into the process how? By donating their money to candidates.”

He continues, “If it’s the case that an entity, the DNC, its chairperson can rig an election, and there’s no remedy at law for people who’ve made financial contributions on the basis of what they’ve omitted to tell the public, well, I submit that that’s a really dire road for this country to be on.

“But what gives me hope is that we have an ancient tradition of common law in this country that goes back even well before the founding of this republic and protects against fraud and protects against deceit. And it makes no exception for people who are in the political realm. And it doesn’t offer blanket immunity for people to make misrepresentations simply because those representations are made in the context of a political campaign.”

The capital-L Law is our only hope right now for restoring order in a Democracy that has become deranged. Let’s hope reason prevails, and this case moves on to discovery.

NOTE: I will have more on this as the judge issues his ruling, and media discourse progresses. I will also address areas that readers have suggested for further scrutiny (superdelegates, Unity Commission). You can help fund our work by clicking on the DONATE image below. Listen to PNN on Sunday evening at 7pm for up-to-the-minute updates, and (hopefully!) a live interview with plaintiff’s attorney Elizabeth Beck. Download the podcast anytime.

Keep the comments, questions and ideas coming. Reach me on Twitter @nashville_brook.