Dwight Bullard should take his seat back with full party support

Before State Sen. Frank Artiles resigned, there seems to be evidence that party insiders were already positioning to put the kibosh on a potential progressive running for the seat in 2018—specifically Dwight Bullard.

Despite the fact that Artiles was weakened amidst a cloud of boozed-up bigotry wherein he referred to African-American colleagues using the n-word, a “f—ing a–hole,” and “b—-.” the Miami Herald also reported that Artiles said ‘Senate President Joe Negron had risen to power because of “six n—–” in the Republican caucus.’

Given this racially-charged attack on African American lawmakers, you’d think the Democratic party would automatically reach out to Dwight Bullard who won the primary for that seat in 2016. But a whole day prior to Artiles’ resignation, party insider Matt Isbell was on Twitter politicking to weaken Bullard.

Since Artiles’ resignation the emerging Democratic Party favorite isn’t Bullard. It’s ex-Republican Ana Rivas Logan who lost the 2016 primary to Dwight who actually beat both Rivas-Logan and Andrew Korge. Korge was said to be responsible for a smear campaign against Bullard claiming he met with “terrorists” on a trip to Israel…something something…and therefore antisemitism. It was an outrageous, disgusting claim completely unsupported by evidence.

These kinds of hopped-up charges of antisemitism have sadly become de rigueur for South Florida conservative Democrats seeking an edge against progressives who largely don’t give full-throated support to Likud which is known for breaking peace treaties, expanding settlements and accruing a problematic human rights record vis-a-vis the Palestinians.

The smear campaign was pushed in the primary despite the fact that a Florida State Senator is about as likely to be involved in foreign policy in Israel, as they are to craft law pertaining to snow removal. 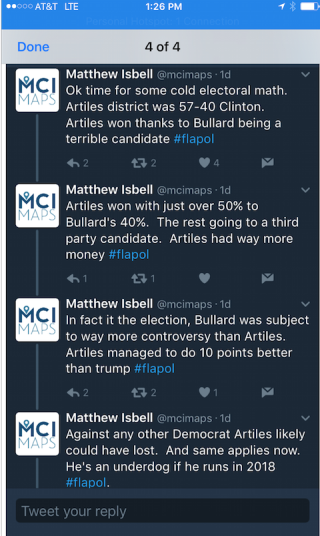 It goes without saying that this smear was intended to exploit the South Florida Jewish community’s interest in Israeli policy. It would be ugly enough coming from Republicans, but as a project of Democratic operatives, it’s an inexcusable scorched-earth tactic. Why not spend that energy on attacking Republicans? Instead, Korge handed Artiles a giant glowing meme to use against Bullard in the General which helped turn the seat red in a district that went for Clinton 57-40. Sure, there’s other factors in that district, but in the context of this campaign, the smear job was the single-most notable political action.

I don’t know if Dwight Bullard will step up to the challenge to fight for this seat in the special election—but I hope he does, and he deserves to have 100 percent support from the Florida Democratic Party.

← Inside the Florida Democrats Q1 fundraising and expenditures (UPDATED)
What we are reading: Tallahassee Democrat on Andrew Gillum and the Democrats dilemma →