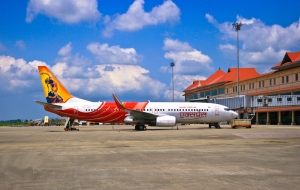 Since Donald Trump ascended to the Presidency he has attempted rhetorically to undermine President Obama and Secretary Kerry’s remarkable achievement in negotiating a nuclear deal with Iran and thawing relations that had been moved to a frozen chill by neoconservatives and other American policy makers.

It appears based on events in India that Trump’s Administration might be actively considering re-instituting significant sanctions on Iran. In what might seem an innocuous and unrelated event, Air India Express, the discount arm of India’s national flag carrier has in the last few weeks cancelled plans to begin previously-announced service to Tehran’s Imam Khomeini Airport (IKA) on March 27. Several airlines have begun Tehran-IKA service from western Europe since the nuclear deal including British Airways and Lufthansa. However, Air India and Air India Express have purchased a large percentage of their fleets (Boeing planes) through the Export-Import Bank which ties the airline to official US policy. Air India cannot serve with Boeing planes financed through the Export-Import bank locales with significant US sanctions.

It must be assumed the Indian government has some sense that the US might impose fresh sanctions on Iran for Air India Express to take this action.

Trump’s potential policy shift is very disappointing as an even-handed US policy toward Iran as well as the Gulf States is needed.  I will concede that the clerics who run the show in Tehran cannot be entirely trusted. But the United States has long tilted one way in the disputes that characterize the Muslim world and it what President Obama and Secretary Kerry are accomplishing with the Iran deal is a more balanced, nuanced American policy when it comes to the Middle East.  The United States does not need to show definitive tilt in a dispute between Sunni and Shi’a Muslim theocracies, but over the last 30 years has demonstrated one.

The hope I had was that the alleged ties between Trump and Russian leader Vladimir Putin would lead the new US President to take a fairer approach toward Iran. In the Saudi-Iran dispute, Russia has tilted strongly in favor of Tehran. The United States has on the other hand remained partial to Saudi, Qatari and Kuwaiti considerations.

Many of the US allies in the region are theocracies (no different that Iran) that do not care for the civil liberties of their people and have held a great percentage of their populations in virtual bondage. Unlike Iran, some of these countries even operate a virtual slave labor market of foreigners and those who are not Muslims. Many Republicans including Florida’s Junior Senator and  failed Presidential Candidate Marco Rubio and some Democrats United States responsibility to help ensure the “security” of these repressive theocracies. One these nations, Bahrain has undergone protests by its Shi’a majority  since the beginning of the Arab spring against the Saudi backed Sunni minority government.

My extensive, multi-year study of these issues leads me to believe the proliferation of anti-western, anti-Christian, and anti-Hindu/Buddhist Islamic terror has less to do with Iran and its allies including Bashar Assad’s Syria (another place where an even-handed US approach working with Russia would be preferable to current policy) but its enemies in the region such as the oppressive Saudi regime.  (I am not saying Iran/Syria does not sponsor terrorism but not to the extent other states  Many Republicans and Democrats imply are our allies do not- still they are an exporter of terror and must be treated as such, but the application of this should be consistent) It is worth noting that in the period after 9/11 Iran was far more cooperative with American intelligence agencies than the Saudis were and had been strongly opposed to the Saudi sponsored Taliban theocracy in Afghanistan who were Osama Bin Laden’s protectors.  Iran also provided intelligence about Iraq prior to the infamous George W. Bush “Axis of Evil” speech which unwisely linked Iran with Saddam Hussien’s Iraq even though the two nations had fought a bloody war and were far from allies.

Nobody is doubting Iran still possess some danger and must be monitored closely. What we however are concerned about is empowering the Saudis and Gulf States. The pivot in US policy authored by President Obama and Secretary Kerry was wise and has irrespective of the rhetoric from neoconservatives and Likudniks in Israel made us safer along with our Israeli allies but will give us an opportunity to punish states who do not share our values about humanity in the future. We should all hope in this case where there is smoke we won’t see fire and Air India Express’ aborting of Tehran service is simply a precaution and that Trump’s administration will pursue an even-handed approach toward Iran.