Analysis: Is Southwest too little, too late to the international party from Fort Lauderdale? 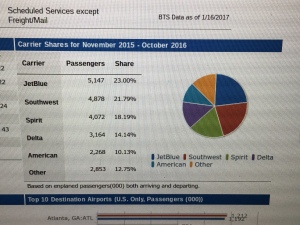 A three-way battle for international traffic is brewing at Fort Lauderdale-Hollywood International Airport (FLL) . The one time sleepy FLL has long had a congestion problem as it emerged from a sleepy backwater spoke airport in 1990’s to a major air traffic hub that is among the 50 busiest airports in the world in the 2010’s – this is partly due to the airport catching up to the immense growth particularly among Latino’s/Hispanics in southeastern Florida and also due to the high operating costs and megahub operated by American Airlines at neighboring Miami International Airport (MIA). The airport currently has three major players in terms of domestic passenger counts – JetBlue, Southwest and Spirit (see the chart to the right). Network carriers American, Delta and United have reduced FLL flying to hub airports with a few exceptions (such as American’s point-to-point flight from Fort Lauderdale to Port-Au-Prince in Haiti and Delta’s flight to Raleigh/Durham) while smaller niche players Allegiant and Silver have built a decent sized operation that appear self-sustaining with little competition from the big guys. When you factor in flying to points internationally JetBlue pulls away from Southwest in terms of overall numbers at the airport and Spirit flies close to as many passengers as the Dallas-based carrier out of FLL.  But now Southwest is striking back.

Southwest Airlines announced new service from Fort Lauderdale/Hollywood International Airport on January 5 to multiple international destinations. It’s the latest expansion for Southwest to destinations in Latin America and the Caribbean. The next day tragedy struck the airport with a mass shooting that left five dead, dozens injured and tens of thousands displaced temporarily. This post was originally scheduled to run last weekend but the shooting and the Florida Democratic Party’s chair race delayed the post. 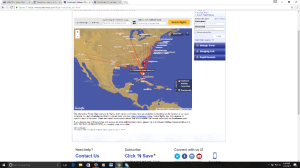 Southwest has patiently waited while a new Concourse A in Terminal 1 at Fort Lauderdale-Hollywood International has been built. The terminal will feature five dedicated international gates allowing Southwest to target new international service out of Fort Lauderdale in a less-crowded customs area than JetBlue and Spirit use in Terminal 4. With a large presence already at the airport and a domestic network in medium and large metropolitan areas that is largely unparalleled, Southwest sits in a good position to try and lob off some of the origin and destination traffic from southeast Florida to Latin America while also using Fort Lauderdale effectively as a connecting complex – perhaps the single terminal idea will make Southwest a more attractive proposition for some travelers than JetBlue whose international flights arrive in Terminal 4 but onward domestic flights  depart from Terminal 3. Though it should be noted a concourse to connect the customs area of Terminal 4 to the domestic gates in Terminal 3 is being undertaken currently. 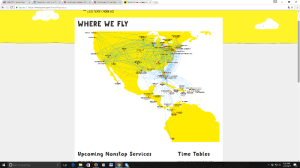 Spirit’s business model is different than that of either JetBlue or Southwest so they are only tangentially relevant to this discussion because Spirit relies largely on origin/destination traffic and those who might not fly otherwise. Spirit’s operations throughout the country including its Fort Lauderdale base seem immune to whatever pressure the larger airlines apply because they have such a unique business  model. Fort Lauderdale is Spirit’s largest base followed by Chicago (O’Hare), Las Vegas Dallas/Fort Worth and Detroit. It’s worth noting each of the five airports with large Spirit operations are hyper-competitive, yet the airline’s model seems to be elastic to whatever the so-called US big four airlines (American, Southwest, United or Delta) throws at them in terms of competitive capacity or pricing. Spirt’s pricing model despite controversy will always have a niche in a cost-sensitive American consumer market.

In 2014, Southwest was the world’s second largest airline in terms of passengers carried but the completed 2015 American Airlines-US Airways merger (which created the world’s largest airline) and new labor agreements with its unions that will push up costs in addition to the delivery of new Boeing 737 MAX airplanes present challenges to the Dallas-based carrier’s market share and profitability. Southwest is a heavily unionized airline which might give it a competitive disadvantage cost-wise against less unionized JetBlue and Spirit.

JetBlue Airways has become the largest carrier at the airport with a methodical but carefully-planned expansion that since 2010 sees the airline today serving all but a handful of the most popular domestic and international destinations from the airport. While Spirit Airlines flies many of the same routes as JetBlue from Fort Lauderdale it can be argued the New York-based airline’s biggest local competition to international points south is American Airlines who operates a fortress hub down the road at Miami International Airport. From Miami, American services every major airport in the Western Hemisphere as well as London (Heathrow), Paris (CDG), Madrid, Milan (Malpensa) and Barcelona in Europe.

The JetBlue nonstop service network from Fort Lauderdale can be seen below. It’s not as extensive as Miami’s American network but it is quite impressive though some obvious holes in the network are there – more on that in a minute.  It’s worth noting JetBlue codeshares on Emirates Airline’s Fort Lauderdale-Dubai service which opens up the rest of the world to the New York-based airlines loyal fliers. 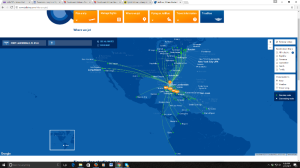 For twenty years Southwest has patiently built a useful point-to-point domestic network from Fort Lauderdale (and an even larger network from Orlando and Tampa). Now the airline is poised to try and become an international player from the state. The Dallas-based carrier has already begun to develop an impressive network to Central America and the Caribbean from Baltimore and Houston’s Hobby Airport. . With a feeder network that is superior from the Midwest and Texas, Southwest can compete for connecting passengers with JetBlue though one wonders if the local- origin and destination traffic may continue to prefer JetBlue.

The intense competition from Latin America to South Florida has led many to speculate Southwest is entering the market too late. But history teaches us that Southwest has generally won most battles it engages in even if it enters late and appears to be facing long odds. When Southwest launches its Fort Lauderdale expansion based around international flights, it would be unwise to bet against the carrier. For 45 years, Southwest has changed the landscape of markets it enters and has generally not shied away from competition. This has allowed the airline to dominate flying between large and medium sized markets throughout much of the country outside of hub airport of the other major airlines. Latin America and the Caribbean might be no different.