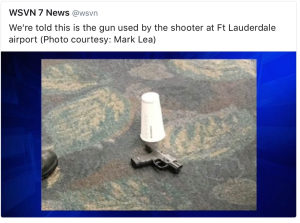 Once again Florida has suffered a mass shooting. This time it happened in one of the busiest airports in the United States, Fort Lauderdale International. According to reports the shooter, Esteban Santiago, had checked his gun in a bag and upon retrieving his luggage, went to a bathroom and emerged with a loaded 9mm. He emptied it and then waited to be arrested. He killed five people and eight others remain injured.

Embarrassingly, at this hour, Joy Reid is leading MSNBC’s news with the Russian intelligence report which tells us nothing new about the election, does nothing for Democrats, and does a great disservice to anyone horrified by yet another mass shooting. Progressives must do better. We must do better.

There’s so much confusion and mystery surrounding this tragedy. CBS News is reporting that as recently as November, Santiago had been under Army Investigation for psychological problems. So, why was he allowed to fly with a firearm?
Given all this, can you believe Republicans in Tallahassee are preparing FOUR BILLS that will make it easier for you and your family to be the next victims of a shooting in Florida
Susan Smith, President of the Democratic Progressive Caucus of Florida isn’t having it, and neither should you. Light up some phones, people.