The Fall of Rome and today’s America 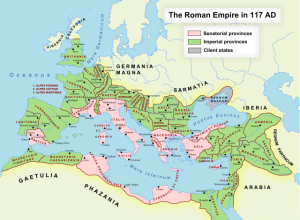 The United States of America, which has undergone a long transition from Republic to Oligarchy/Empire is often compared to Ancient Rome. The Roman Empire spanned an almost unimaginable amount of territory for centuries. But in the late 300’s CE and 400’s CE the world seemed to come to an end as Rome gradually fell and the scale of life as well from personal life expectancy, to cities, to engineering, to running water fell into long-term decline and disrepair.

Reading about Roman history has been one of my favorite hobbies since I was a teenager. I’ve been collecting books about Rome and particularly the fall since the late 1980’s, but recently my interest in this topic has taken on new dimensions given events in the United States.

Michael Grant, who was one of the top historians of Ancient Rome during the twentieth century wrote a particularly poignant book The Fall of the Roman Empire which provided something different than the general narrative histories of Rome’s decline and fall. Grant’s work instead focused on the societal pressures that led to the political and military events that extinguished the eternal light of Rome.

The most important lessons from Grant’s writings are:

The Iraq War continued a long cycle where the United States piled on debt due to military expenditures or adventurism and created a greater class gulf than ever before. Much like Rome where the wealthy aristocratic families and the Senatorial class felt little tangible impact from frontier wars against the Barbarians, the United States has gotten to a point where without a peacetime or wartime draft, the burden of military excursions is placed squarely on the working class – the impacts of foreign policy mistakes and wars aren’t felt by the ruling class. Unlike World War II where everyone in Washington and the nation for that matter felt the impact of the struggle, George W. Bush’s America was one of elitist indifference to the consequences of policy decisions that impact working people.

Imperial Rome long had a history of tolerance at least at a basic level. However, eventually race versus race became a staple of Roman society in the 300’s and 400’s as elites looked down upon Germans (ie. Barbarians in the Roman mind) and failed in any attempt to properly assimilate them into society. Germans didn’t seek to destroy Rome, but to partake in the fruits of Roman society.  That’s why the term “invasions” is from many perspectives the wrong way to describe the Germanic/Barbarian incursions into Roman territory. Should the United States not fully integrate the recent immigrants into the mainstream of American society a Roman-like collapse might be inevitable. This is where the left has to make some sort of accommodation on multiculturalism and stressing differences between people – we MUST emphasize what brings us together more than what draws as apart as human beings living on American soil.

People in the United States of all political stripes have become disaffected with the indifference of bureaucrats and political appointees. The distance between authorities even on the state level and the populations they govern has grown from a psychological standpoint over the last many years. People on both the left and the right have become disenchanted with political appointments whose by-the-book enforcement of regulations on working and middle class folks. This has happened while many of the same officials have generally demonstrated a disinterest in the excesses of the privileged class – those who donate to political campaigns in both parties.

While the Roman issues with the state versus free belief revolve almost entirely around religion, here in the United States we have that problem as well as the growing issue of political correctness which does not let people speak out on any matter freely at this point in time. “Free belief,” isn’t just limited to political correctness in the obvious sense (no racial or ethnic commentary) but it is also quite dangerous in a capitalist society to speak out against entrenched monopolies, American war-mongering and other aspects of US foreign policy that might be distasteful and dangerous to the masses. We have created a society of conformity where only one of two options (the official Democratic line or Republican line) are considered by many acceptable forms of discourse.

Many writers smarter than I on both the left and the right have spoken out about how the decline and fall of Rome might be mirrored in American society. For the most part, I spent years subconsciously ignoring the obvious parallels though following an election which told us so much about our country, many of these critiques now apply to the United States, I have discovered.

← Time for David Beckham to drop Miami MLS plans – why the area continues to fail
We are the ones; Now is the time; Before we blow it maybe we should understand it? →
Join 22,501 other subscribers