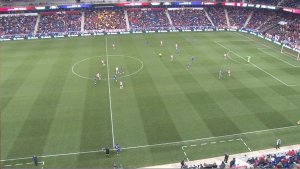 Officiating in Pro Soccer at all levels has been under the microscope in this young season for MLS, NASL and USL. An increase in red cards and “reversal” of calls or non-calls during the week has raised the discussion of referees to a fever pitch. In the middle of all of this has been Orlando City SC who have some very good soccer fans but others who are less knowledgeable about the sport and carry a victimization complex about officials being unfair toward the club (Why referees would under this premise choose Orlando to target instead of let’s say Los Angeles or some other club that has won a number of trophies at a high level is beyond me and completely illogical) .

Some in the media have even picked up on this narrative and declared Orlando doesn’t get fair treatment from officials. But a news flash, just about everyone in the sport suffers the same fate (I work as a consultant with the Fort Lauderdale Strikers and our club has had two very controversial incidents that resulted in sending offs each of the last two matchdays, but this is more normal than an aberration this year in American soccer) and Orlando is not being treated any differently than other clubs. In fact they’ve arguably benefited from some controversial calls.

Full details of the recent spate of controversial calls and how it relates to Orlando City SC from my Orlando Rising piece.