In 1943, at the height of World War II President Franklin D. Roosevelt took the first ever Presidential flight. In those days no such thing as Air Force One or Andrews Air Force Base (which would open five years later). Air travel was seen as risky for the President who continued to travel by train and car throughout the United States, and whose previous overseas trips had been by ship. But needing to reach the Casablanca Conference in Morocco to meet British Premier Winston Churchill after the success of Operation Torch  the amphibious invasion which liberated North Africa FDR boarded a plan to make the journey.

His departure point was not anywhere near Washington DC but was Dinner Key Airport in Miami. While FDR had taken a plane to accept the Democratic nomination in 1932 this would be first he would travel by air since becoming President. It was at the Casablanca Conference where FDR and Churchill determined “unconditional surrender” would be the only acceptable terms of surrender by Germany and her allies.

Dinner Key was in 1943 the world’s busiest international Airport. It had become so in the mid 1930’s as Pan American World Airways (Pan Am) built up its sea-boat operation from the base. Beginning with Charles Lindbergh flight to survey routes from Miami in 1930, Pan Am built a massive operation from the field. 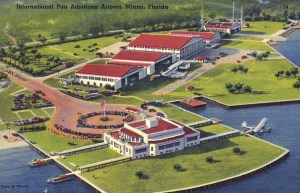 “Pan Am Facilities at Dinner Key” by Source (WP:NFCC#4). Licensed under Fair use via Wikipedia

Throughout the 1930’s Pan Am’s flying boats stretched out from Miami to points south often landing at places in Latin America with gravel fields and thus the need for a seaplane was necessitated. World War II led to the creation of many paved air fields in Latin America and Florida, so in 1945 Pan Am shuttered Dinner Key and moved inland to Wilcox Field (Miami International Airport).

Today the former Pan Am Terminal serves as Miami City Hall pictured below. 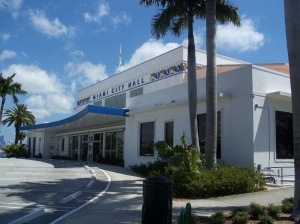