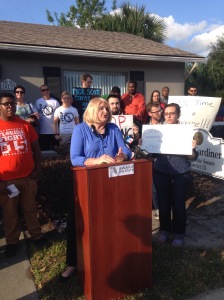 For the fifth consecutive year, “Awake The State” rallied working Floridians and those who care about good government across Florida on the opening day of the legislative session.  Activists and concerned citizens in Central Florida rallied in front of Senate President Andy Gardiner’s district office. In wake of the most recent scandals involving Republican officeholders, Former State Rep. Linda Stewart addressed the audience to discuss the continuing culture of cronyism and corruption that has enveloped parts of official Tallahassee. Stewart is a potential candidate for the Senate seat Gardiner will vacate in 2016.

Recent controversies involving state and local officials who have benefited from a culture of entitlement and cronyism in Florida and who have also at times been the beneficiaries of a passive media particularly in Tallahassee have dominated the thinking of many citizens across this great state. Florida at one time promoted Government in the Sunshine, thanks in large measure as a reaction to the numerous scandals that dominated state government in the late 1960’s and early 1970’s.

Florida quickly went from one of the most corrupt states in the union to one of the most open and transparent thanks to the leadership of Governor Reubin Askew and the progressive legislature of the mid 1970’s. However, in recent years as Republican control of the state has solidified and many elected Democrats have consciously chosen a course of accommodation over the desire to hold the top officials at county and state levels accountable, Florida has backslid tremendously toward the low standard set in the late 1960’s and early 1970’s. Today we need to rediscover the Askew zeal for change and open government.

The legislature has also ignored the agenda of regular Floridians since the complete GOP takeover of state government in 1999. Among the other agenda items discussed at Awake The State rallies around Florida were expanded health care, water protection, clean energy and a living wage. Here at TFS we strongly support all of these items and efforts and will of course be active and engaged in Tallahassee this session to promote all of these causes. As we outlined this morning we do encourage all activists to track the legislature but also focus on local government, ballot measures and the ability to push progressive change locally especially in areas where the stranglehold of corporate backed special interests and lobbyists might be less than in Tallahassee

Pictures from the Orlando rally below courtesy of our friend Amy Ritter. 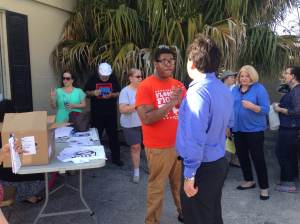 ← State of the State: Fluff, Awkwardness, and Mark Pafford’s Rhetorical Questions
EDITORIAL: Large scale gambling has no place in our Florida →
Join 22,501 other subscribers