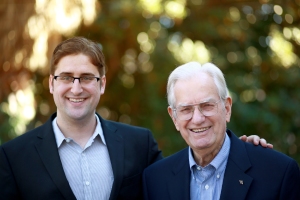 . Recently, I sat down with author Robert Buccellato for a candid chat about the legacy of Florida’s Governors and the challenges of leadership today in the Sunshine State.

The lessons of Reubin Askew, perhaps Florida’s greatest governor were foremost on the mind of both Buccellato and myself. Askew sat down for extensive chats with Buccellato before his passing last year and he spoke to the author about “running like you want to win” and about not taking money from everyone who throws it at you.

Florida politics had a particularly corrupt reputation when Askew ran for Governor in 1970. By the time he left office in January 1979, the state had arguably the most stringent and restrictive campaign finance and public government disclosure laws in the nation.

As we’ve discussed previously on this site, the greatest power outside of the Governor in the state was for many years State Senator Dempsey Barron (D-Panama City). The crusty conservative Barron controlled the State Senate like a private fiefdom and regularly clashed with Askew. Two of Barron’s least favorite members of the Senate were the “Doghouse Democrats,” Bob Graham and Buddy MacKay. Both would eventually become Governor.

In 1978, when Bob Graham decided to seek Governorship the hope among Barron and his Senate allies was that Attorney General Bob Shevin who was running with Conservative Senate Barron-ally James Glisson would deny Graham the Democratic nomination. Barron’s allies were confident of a Shevin victory until Wayne Mixson jumped on Graham’s ticket. The conservative Mixson from Jackson County balanced perfectly the Harvard-educated South Floridian Graham and the Graham/Mixson ticket made a surprisingly strong second place showing in the Democratic Primary.

In the days of the runoff elections, often the candidate that finished second in the primary would rally to win the runoff and the  general, and Graham proved this rule once again defeating Shevin in the Democratic runoff and Republican drug store magnate Jack Eckerd in the general.

Hearkening back to the days of strife in the 1960’s the author and myself remarked about how whenever an out-and-out liberal candidate (at least in perception) was nominated by the Democrats they always ended up with 45% of the vote statewide in the general despite changing times. Robert King High the liberal, pro civil rights Mayor of Miami upset sitting Governor Haydon Burns in the 1966 Gubernatorial Primary. The was the second time a Governor previously elected could run for reelection after the move of the elections from Presidential years to off-years. That move was meant to favor the Democratic Party, but the segregationist Burns was upset in the primary and the Republican Claude Kirk became the first from the GOP elected to the office in over 90 years with a 55-45 win over High.

Twenty years later, liberal Rep. Steve Pajcic  (D-Jacksonville) held off conservative Attorney General Jim Smith in a runoff by a slightest of margins. A conservative Democratic exodus from the Pajcic ticket occurred, led by none other than Dempsey Barron and Republican Bob Martinez was elected 55-45. The same margin occurred in 1998 when many Democrats backed Jeb Bush against Bubby MacKay.

MacKay, a personal favorite of mine spent some time with Buccellato as well. The author discussed various facets of leadership with Governor MacKay and the state of things currently. On Governor MacKay, we concurred that his leadership style which was hard-charging and very strong-willed sometimes rubbed people within the political and legislative processes the wrong way. But MacKay is after all a man of ideas and strong personal principles, unlike many of the chameleons that populate Florida politics (This is my view not necessarily that of Buccellato). While perceived as a liberal his ideology was more about ideas and results than any convenient label.

Since the 2014 election, I admit I have been having second thoughts about single-member districts in the legislature and have been toying with writing an editorial on this site about the need to consider a return to multi-member districts. Buccellato, who is the grandson of former State Rep. Walt C. Young, one of the best members of the legislature during the state political golden era of the 1970’s and early 1980’s and I talked through the issue and also one of enlarging the legislature potentially. When you consider that the number of Reps and Senators was fixed when Florida’s population was under 6 million and we are now approaching 20 million citizens the reasons for reform are clear. Florida’s House and Senate also worked more effectively to solve the state’s problems in my opinion in the era between 1968 and 1982 when many members were elected from multi-member districts and thus had to take a broad perspective on things. No question some single-member districts need to be kept in place to maintain minority representation, but some changes can be made. Look for a piece on this issue in the near future.

We discussed the tendency for our leaders today to cite other state’s as reasons to implement programs here. “Florida lacks a fluid identity” the author stated to me, and thus what works elsewhere may not work here. “This state is different, and unique,” he correctly declared. Florida’s uniqueness means policies need to be crafted specifically for Florida not tried simply because they may have worked elsewhere.

The Governorships of Fuller Warren, Leroy Collins and Charley Johns were also discussed extensively in our sit down. Collins, both the author and myself acknowledge transformed Florida and prevented the state from becoming another reactionary southern state much like Alabama or Mississippi during the height of the Civil Rights era. Warren’s populism and campaign style resembled a combination of Huey Long and Texas Governor Pappy O’Daniel (who may have stolen the 1941 US Senate race from Lyndon Johnson, the only loss of LBJ’s career) but his relationship with the legislature led almost instantly to impeachment proceedings and allowed Dan McCarty, who had finished second in the 1948 Democratic Primary to continue campaigning for Governor during Warren’s term. This led to McCarty’s election in 1952, but three pack a day smoker was dead within a year of election. McCarty was the only Governor from South Florida until Graham’s election in 1978.

The unique fabric of Florida Government and politics was richly discussed in our sit down. I would encourage everyone who reads this site to explore in-depth the rich topics associated with our state, especially since the end of World War II. For me the sit down with Buccellato was an amazing hour and a half of story telling and optimism about the state we love so much.