Ukraine: If Sanctions Fail, What Other Options Do We Have To Stop Putin’s Aggression

So this Ukraine thing is not over. Not by a long shot. Since my last post on Ukraine, Vladimir Putin has invaded and annexed the Crimean Peninsula, amassed troops at the eastern border with Ukraine, and continuing to troll Obama and the West.  While cable news is distracted by the missing Malaysian jetliner, and thus not covering the constantly developing events out of Ukraine, Putin has been taking advantage of this while he continuing to troll the West and win this round of the confrontation.  My last piece on Putin’s invasion of Ukraine, laid out the options that were before President Obama in order to respond to Putin’s latest aggression. Many of which, have already taken place- sanctions on oligarchs, threatening to suspend G8-G20 membership, and engaging in NATO expansion talks with Former Soviet Republics. 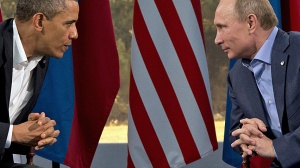 As a follow up, now that sanctions are in place, and many (including TFS’ own Kartik Krishnaiyer) have questioned their effectiveness, this piece will lay out some of the options the US and its allies have at their disposal if the Russians continue their aggression in mainland Ukraine or even into other Pro-Russian Former Soviet Republics (FSRs) like Belarus or Moldova or former Eastern-bloc nations such as Bulgaria and Romania.

First what exactly, are these sanctions and whom do they target? Obama’s first batch, targeted eleven people. Yes, eleven. They included two top aides of Russian President Vladimir Putin. In the days after that,  Obama and Putin have talked several times as reported in the American and foreign press, but Putin’s movement toward Crimea hadn’t halted. In fact, it progressed. Russian forces stormed the Ukrainian Naval HQ in Crimean port of Sevastapol and raised the Russian Flag, just yesterday.  It can be argued that President Obama, has no influence over Putin as this moment, and further more, it seems Putin has no interest in ceding to his demands.

So, what other non-military options can be taken to being to contain Putin’s illegal aggression? There are many ideas floating around Washington about what could be included. Florida’s own Senator Marco Rubio, suggests arming the Ukrainians , and Senator John McCain released a lengthy list of eleven different ideas on how we can respond as well.  I’ll break down what options are being discussed  Congress, the International Community, and even the Executive Branch have at their disposal that may just add some pressure to Putin Finally, I’ll add my two cents, including an idea that I really haven’t heard much talk about: 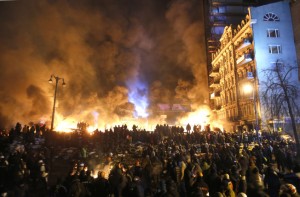 To my progressive friends, notice none of these options include all out war or even a military skirmish with the Russians. I, TFS, nor any sane person in the world is calling for all out war with the Russian Federation. Such a military campaign is not in the best interests of the United States, its people or Russia, Vladimir Putin or the Russian people for that matter. That being, said, illegal military incursions and selfless acts cannot go unpunished in the 21st century otherwise they set a precedent for further violations of international law.

There is one other option on that really hasn’t been discussed publicly, but I can pretty much guarantee you, its has been brought up in some room in Washington DC. If we really want to to put pressure on Putin, back him in a corner, and get him to halt his aggression, we must do so WITHIN Russian borders, meaning, putting political pressure on Putin domestically. In other words, making life difficult for Putin insideRussia.  Putin will not be deterred by threats of isolation. Thats EXACTLY where he wants to be.  He wants a unified and strong Russia that’s a player on the international stage, but one that is also feared globally as a world power. The only way to get ahead of that, is to cause him political discomfort at home.

There is precedent for this, and America has been involved in such actions under President Obama but we never really saw it through all the way to regime change- in Iran.  Before and during the the 2010 Iranian elections, the US was backing the challenger and moderate Presidential hopeful  Mir-Hossein Mousavi in a tough battle against incumbent, universally known lunatic, Mahmoud Ahmadinejad. The US Intelligence community was aiding the opposition and the Green Revolution in hopes that it would lead to regime change in Iran, it failed, as academic circles have argued, because at the time, we did not see it all the way through. We didn’t fully endorse the opposition and tangibly aid then protestors. In time however, the Iranian people chose their own destiny, and elected a new President Hassan Rouhani, another moderate hopeful just last year.

This situation remains fluid and is constantly changing. Just this morning, President Obama read a brief five minute statement, echoing some of my own concerns: that Russia may be planning further military incursions, not only into mainland Ukraine but also into places like Belarus, Bulgaria and Romania. In response to that fear, the President announced a new batch of sanctions targeting President Vladimir Putin’s chief of staff and 19 other individuals as well as a Russian bank that provides them support. Shortly thereafter, Russian officials announced that they had imposed entry bans on US lawmakers and senior White House officials. Among them were Senate Majority Leader Harry Reid,  and House Speaker John Boehner, R-Ohio. President Obama’s Senior Adviser Dan Pfeiffer and his deputy national security adviser, Ben Rhodes. This further echoes our concern here at the Florida Squeeze, that these sanctions will not be effective in stopping Putin’s aggression or even slowing it down, thus other options as stated above must be considered as this crisis continues to snowball and the media remains preoccupied with a missing plane.