Is the “Brightline effect” poised to change the way we casually travel? 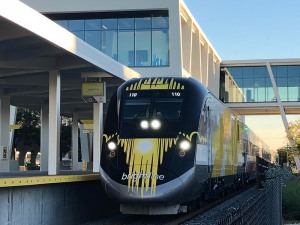 Unveiled to much hullabaloo in southeastern Florida, Brightline has become a sensation. The rail service has wowed customers with higher-speed travel and scintillating service. Now Brightline is looking to change train travel across the nation. Call it the “Brightline effect”

Brightline isn’t really for commuters (especially one like me who has a Hybrid and can use the I-95 Express Lanes). For travel within southeastern Florida on a daily basis, the combination of commuter system TriRail, and rapid transit systems Metrorail and Metromover. The cost and access to stations in West Palm Beach and Fort Lauderdale from western suburbs make it prohibitive for daily, time-sensitive use. But for other travel needs between the central cities, it’s become the preferred option of most, bypassing the intense backups and stress delivered by I-95.

What Brightline HAS done is make create a new generation of day tripper’s, making southeast Florida closer in spirit. Youngsters from Fort Lauderdale hop a Brightline to visit the museums in Downtown Miami or to have a nice dinner in Brickell. Miamians hop a train northward to shop on Las Olas or visit City Place in West Palm Beach. People in Palm Beach County hop a train to see Fort Lauderdale’s arts scene, and so on and so forth. The trains have also proved a way of linking tourists as many visitors to Miami from Europe or Latin America fly into Fort Lauderdale-Hollywood International Airport, and many tourists from all over who stay in Miami want to visit Fort Lauderdale and West Palm Beach.

While trains abroad serve a commuter purpose, they also serve an important weekend and day trip function. Take soccer games throughout England – train stations are filled with football fans going to away dates for their clubs – train service makes English football unique in the global game because travel for away fans is so easy.

Every weekend supporters jump on Virgin trains from Manchester to London Euston or on Great Western from Bristol to London Paddington or on Southern from Brighton to London Victoria, so on and so forth. Brightline is already serving a similar function here as concert goers, those who want to take in a show at any of three major performing arts centers in the region, Miami Heat fans and casual shoppers move more freely and with ease throughout the region.

The idea of Brightline bringing similar service between Tampa and Orlando, Los Angeles and Las Vegas and any number of city pairs around the country is appealing after seeing the “Brightline effect” in southern Florida.

While the politics and connections of Brightline’s funders has been dissected by some media and activists on the left in the state, the service is the best we’re going to get in all likelihood and so we may as well embrace it. In time, greater connectivity might ensue whether via Brightline, other private operators or even public services. Consider it our own transport revolution born and bred right here in the Sunshine State.