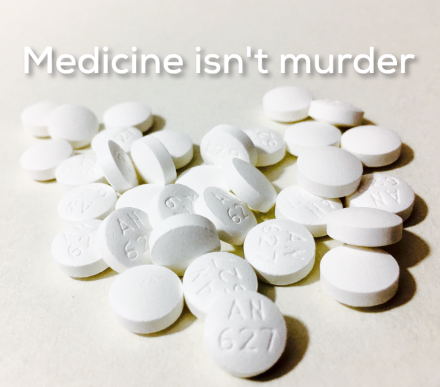 I promise I’ll have Part 3 of the DNC fraud lawsuit series up soon. In the meantime, please pay attention to this important story by Dr. Thomas Kline MD, PhD, geriatric medicine specialist in Raleigh, North Carolina.

The opioid crisis is being used as an excuse for all manner of stupid policy, sometimes completely unrelated to drug-related deaths. For example, the “opioid crisis” was used an excuse in North Carolina, for a 3 a.m. budget amendment that cut education programs in Democratic districts (yep, just in D districts).

Like many states, North Carolina is considering new restrictions on doctors and patients inspired by Gov. Chris Christie’s New Jersey legislation that requires doctors and pharmacies to limit prescriptions. Christie is now heading Trump’s new national drug commission, so we’ll likely be seeing these restrictions imposed at the federal level.

We’re rushing headlong into another drug war waged against doctors and patients, and let me tell you, it’s never been easy for people with pain and the professionals who treat them. What lies ahead terrifies me. Dr. Kline’s article provides a rational examination of an issue that the media and opportunistic politicians have spun out of control. It’s a must-read. You’ll want to have his data on hand in the coming months.

Dr. Kline argues that new political restrictions, such as legislating the dosage a doctor can prescribe, or the length of time allowed on a prescription, are not only inhumane, they do nothing to curb actual drug-related deaths. “Well-meaning people confuse the doctor’s prescribing with the increased opioid (narcotic) death rate by thinking prescription drugs lead to heroin. This is not true,” says Kline. “Deaths from narcotic overdoses usually involve multiple, non-prescribed, street drugs, not pain medicines prescribed by caring doctors.”

This is a well-known fact in the medical press, but it’s ignored in mass media because it complicates the opioid crisis narrative. Medical journals have been reporting for quite some time that deaths associated with opiates are better termed “combined drug intoxication,” because the death occurs from an addict combining many different drugs—not just opioids.

Kline says the too-simplistic narrative puts blame in the wrong place.“Studies have shown that addiction patients rarely find what they need by using prescriptions from their doctors. We need to start putting real numbers and percentages to the problem—not combining all narcotics under the umbrella of the buzzword ‘opioids.’ The narcotics or opioids killing people are not from our prescription pads.”

So, why is this important to me, and why should it be important to you? For me, the war on pain medicine has made me persona non grata in our medical system. Fourteen years ago I became sick with an infection in my spine. It started as discitis (infected discs) and spread to lumbar vertebrae. The initial “insult” caused other pain syndromes affecting muscles and joints. Over time, all my lumbar discs have flattened out like coins. Without the gory details, it’s important to understand that as early as 2003, fear of prescribing opiates was enough to block treatment for my infection for months. I simply couldn’t get any traction in a healthcare setting. Everywhere I turned healthcare professionals either thought I was drug seeking, or diminished the significance of my symptoms, which led to a failure in finding the true cause of the pain. By the time I finally got help I was septic.

Why does this matter to you? The easy answer is that everyone is just one injury or illness away from my situation. But the harder truth is our healthcare setting is already toxic from bad drug policies. Laws under consideration by many states, and likely to be proposed by Christie’s commission, will threaten doctors and pharmacies with stiff fines for prescribing pain medication outside of strict regulations.

Surgery? Better hope you feel all better in five days because that’s all the pain medicine your doctor will be allowed to prescribe. Oh, and your pharmacist’s professional credentials can be pulled for prescribing to an un-deserving patient. Both entities have reporting requirements justifying your medicine. Both entities could be fined as much as $10,000 for every misstep. They’re making medicine as miserable a profession as teaching.

You’re just someone recovering from surgery, but to healthcare professionals under a drug war regime, you’re a potential threat to their livelihood. At the very least, prescribing pain medicine will require more work in a busy office that has no time to spare. Worst case, your prescription could lead to fines or disciplinary action. Additionally, no one wants to be the practice that prescribes in the highest percentile, so expect all healthcare professionals to dial back what is already a paucity of pain relief. Guess who that’s going to be hit hardest? Studies show that people of color are prescribed pain medication at rates far lower than white-anglo counterparts. Poor folks are hit harder than middle and upper class. You know the drill.

Addiction is a real problem. But so is pain. You can’t just suck it up and move on. Pain changes the way you think, and the disability makes your life smaller each day.

These new laws punish people in pain without helping those who have addictions. As Kline points out in his article, “Out of 100 people taking pain medicine, only a very few, perhaps three or four, will develop an addiction. Restricting pain medicine in the other 97 is not good medical practice.”

Let that sink in. In our politicized medical environment those 97 of us who aren’t prone to addiction are forced to suffer in a system that regards us as potential threats. This system hurts everyone. And let’s be clear, the other three percent who ARE prone to addiction, they don’t deserve to live in pain either. We have effective methods to treat addiction. We have effective medications that enable chronic folk to lead full lives. Let’s agree that we’re civilized enough to do both.

Dr. Kline’s sensible, well-reasoned article couldn’t be more pertinent. He lays out real solutions that would actually help prevent drug-related deaths, while ensuring a humane healthcare environment for all.