What we’re reading: Trump Is Scaring Indian Americans Into Finding Their Political Voice 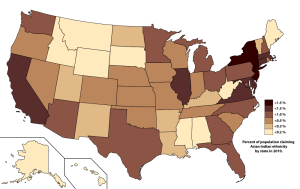 The Atlantic has a good piece on Indian-Americans finding their political voice due to the spate of killings of members of the community following Donald Trump’s inauguration. As an Indian-American however, I would note that simply voting for Democrats as a reaction to Trump is probably a weakening of the community’s potential political power, and that the Democrats use of identity as a substitute for being a truly progressive party that seeks economic and social justice for all in the spirit of Gandhi or Nehru doesn’t merit the votes of the community.

The recent hate crimes are scary for the Indian-American community and political activism is a good thing. But reflexively giving votes to the Democrats, particularly those from the Clinton wing of the party out of anger toward Trump could weaken the community’s leverage in the future. It would also reward the Democratic establishment’s highly cynical approach of dividing the country based on ethnicity and race for electoral gain.

The best hope for Americans of ALL RACES is a vibrant and progressive Democratic Party continuing the legacy of the New Deal, Great Society and other economics-based ideals that made the United States the strongest world power of the 20th Century and made the American dream a real thing.

Ethnic minorities can help so many in their communities and nationally live that dream if they force the party they have adopted to reflect the values of it previously stood on.