Marco Rubio was educated in Florida’s public school and universities. A man who likes to pass himself off as a man of principle and a defender of American values (as evidenced by his “emotional” showboating during the confirmation hearings of Rex Tillerson for Secretary of State – a nominee that Rubio eventually supported) is really just a charlatan who is willing to take stands based largely on his own political survival or in favor of massive campaign contributors.  Rubio today cast the deciding vote in favor of Donald Trump’s Secretary of Education nominee Betsy DeVos .

In the past few days, it came as a shock to many that Rubio has received over a $100,000 in contributions from DeVos family entities and related political committees. But why? Rubio has been a consistent sellout of public education throughout his political career despite having been educated through the public system.

In the Florida Legislature from 2000 to 2008, Rubio NEVER cast a single vote against final passage of any school “choice” legislation. In 2005, he helped push through the body through the House what at the time would have been the single largest expansion of school vouchers anywhere in the country. The legislation was killed in the Senate by the defection of a group of moderate Republicans including Majority Leader Alex Villalobos who represented much of Rubio’s House district in the Senate (Villalobos was removed as Majority Leader at the end of the 2005 session).

Rubio’s closest ally in the legislature at the time was Rep. Arza (R-Hialeah). Arza was the legislature’s resident bully who enjoyed berating education and child activists in public and attacking those volunteers who spent their own money coming from across the state to oppose the privatization of public education. Arza’s arrogance was so great that he’d attack volunteers as paid shills while he was making money on the side from the for-profit-school industry. Arza later went on to be the Director of Governmental Affairs for the Florida Consortium of “Public” Charter Schools.

Rubio’s ally Arza was the chief water-carrier in the legislature for the private school industry and school voucher proponents. He also echoed Rubio’s talking points on “freedom” and taxes. Representing a lower-income urban district Arza’s voting record was much further to the right of his Republican colleagues (including David Rivera, Rubio’s other close associate with a checkered history) who represented Hialeah and Northwest Miami-Dade at the same time. He was a perfect compliment legislatively and temperamentally for an intellectual lightweight like Rubio who tried to give off a demeanor of a thoughtful legislator – Arza was a bully who could serve as an enforcer as Rubio climbed the leadership ranks.

Arza is of course best known for being found guilty of witness tampering and leaving racially insensitive messages using the N-word in reference to then Miami-Dade Schools boss Dr. Rudy Crew on the voicemail of then colleague Rep. Gus Barreiro (R-Miami Beach). Barreiro went to the media and filed an ethics complaint that led to Arza’s downfall and an embarrassing episode for incoming House Speaker Rubio. Arza was forced to resign from the House. This was in 2006 – just days before Marco Rubio was the assume the Speakership in the Florida House.

It’s no small irony those who know Rubio best, the voters of Miami-Dade County favored his 2016 Democratic opponent Patrick Murphy by over 100,000 votes. Rubio after all has put his own ideology and political self interest over that of his community. 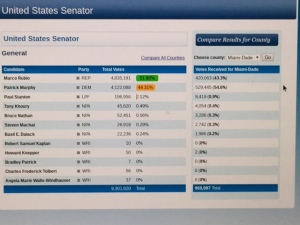 Today Rubio put the capstone on his 15 year effort to decimate Florida’s public schools with his vote for DeVos confirmation. It’s completely within character for an elected official whose entire career has been defined by self preservation and promotion. Repaying a campaign contributor and an industry he has always favored even if contrary to his own background is completely within Rubio’s wheelhouse.

← What we are reading: Is Florida moving too slow to save the Everglades?
RIP Jim Williams – Florida political legend →