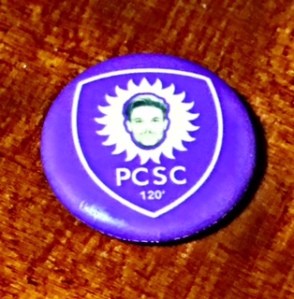 Orlando City SC replaced the released Lion original Luke Boden on Wednesday by signing Victor ‘PC’ Giro to a four-year contract. As someone who first covered and then worked with “PC” during his stint in Fort Lauderdale, I am thrilled for him personally.

PC spent the later portion of the 2016 NASL season with Tampa Bay after having transferred from Fort Lauderdale in August for cash considerations.

For Orlando City SC, the signing of PC is ironic – the Brazilian scored Fort Lauderdale’s winning goal at the death on June 29, 2016 in a US Open Cup Round of 16 match between the two Florida rivals at Camping World Stadium.

“PC,” whose nickname was mocked by one or two Orlando-based reporters (who I will admit as a press officer for the opposing team I wanted to slug – the PC nickname is given to one top prospect in the system of Brazilian giants Corinthians each year  and had those reporters respectfully asked me or one of my colleagues we would have been happy to fill them in on the reasons for the nickname) will now join Brazilian icon Kaka, Antonio Nocerino and the rest of the Lions for Orlando City’s third MLS campaign.

The Brazilian left back has been a sensation at the NASL level, becoming one of the few truly marketable young players in a league whose rosters have been dominated by aging journeymen. In MLS with Orlando City, PC will likely have to improve some of his defensive cover skills, but his ability to get forward and play not only outstanding crosses into the area, but to make late surging runs will be no doubt rewarded with elevated talent level he will be playing with.

Here’s hoping PC has a great 2017 with the Lions and congratulations to Orlando for signing not only a fine young player but an outstanding young man!