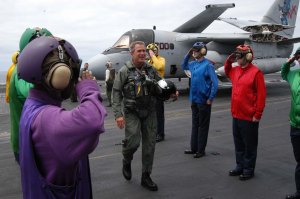 Donald Trump is a bad President and an even worse person. His assault on common decency and our institutions of governance need to be reversed. His history as a sexual predator should have disqualified him from holding the top job – but in spite of this he got elected, legitimately unlike the last Republican President and hasn’t started a shooting war as of yet.

Establishment Democrats obsession with not only defeating Donald Trump but rendering any action of his unethical and unlawful have brought these political insiders together with the George W. Bush neoconservative wing of the Republican Party. In the meantime, these same establishment figures have chosen to forsake efforts to build a values-based party and have pushed back on anything that doesn’t focus directly on “beating Donald Trump.”

Yes Democrats are making common cause with the neoconservatives like Jennifer Rubin, Max Boot, David Frum, Bill Kristol and many many others. These are the people who brought us the Iraq War and the great global recession. (In the interest of full disclosure I have been an avid reader of Frum’s works since the 1990’s and a former Weekly Standard subscriber – but that does not mean I would invite those I respected for having contrary views to mine but ideas worth reading about to inform myself about contemporary conservatism into our tent.)

Establishment Democrats through their mouthpieces on MSNBC, CNN and on Twitter have shown this new- found “Never Trump” alliance is more comfortable for them then engaging and understanding the concerns of working class voters who flipped to support Donald Trump in 2016 or those now backing Senator Bernie Sanders from the same class of Americans.

But perhaps they don’t want to understand these voters. You see the way many of those involved in politics make money is off running campaigns with big media budgets – or being part of bipartisan consulting or law firms. The contempt for the working class or anyone who puts the idea of progressive economics above partisan and anti-Trump considerations is mind-boggling. The fear of having a values-based movement is off-the-charts in 2020, unlike 2016 or 2008 or 2000. In those cycles while a certain contempt and smugness from the elites was present it was never quite like this – why? The Trump obsession.

The neoconservative wing of the GOP, was the governing wing of that party, the more institutionally-connected one that also seems to have a disproportionate influence in the media. CNN and MSNBC LOVE having the anti-Trump Republican on air just as much as FOX loved having either the anti-Obama Democrat on (often bitter former Clintonites like the late Geraldine Ferraro or Doug Schoen) the easy to beat-up liberal Democrat on air. Occasionally those Democrats on FOX end up being great objective analysts when they go to CNN or MSNBC (Kirsten Powers who is absolutely fantastic and an independent thinker on CNN, but I couldn’t stand on FOX comes to mind. I was wrong about her back then as it turns out.) but more often than not, they are just pushovers.

Elites in Washington DC and the chattering classes politically all tend to dislike Donald Trump. Party registration and past candidate support does not seem to matter in this bubble- Trump is offensive. On this I think most Americans who have sense of decency and understanding of how government works would agree. However, opposition to Trump should not be the sole basis for political thinking – it is in fact a dangerous way to approach an election. It’s no small wonder all of these folks now seem to be pulling toward Michael Bloomberg, a bonafide Bush Republican who gave his strong backing for the President at the height of the Iraq War in 2004. at the very same time Bush’s allies were preparing the infamous “swift boat” ads about John Kerry that forever changed American political discourse.

Simply put, Bloomberg reinforces what the Democrats are becoming. A party of big city elites with no consistent views on issues and no values-based ideology. His qualification is a hatred of Trump, which is what the Democratic insiders are most obsessive about. He’s perfect for the Democratic and media elites of today and even better has a full cash machine to buy off operatives and spend millions on advertising making the media companies very happy.

So back to the neoconservatives. The Bush-neoconservative Republicans who like in 2016 represent roughly .0000001% of the national electorate and are largely concentrated in the Democratic states of Maryland, Virginia and the District of Columbia are now strongly influencing the conversation as to what Democrats are “electable.” Of course they will say Michael Bloomberg, because he’s one of them and the Democrats they make common cause with either are making money off his massive media buys and campaign spending or will have access to him through the usual network of DC insiders.

I could go directly into that voters would rather vote FOR something than AGAINST someone based on fear mongering or speaking over their head (which is what a lot of Trump criticism is unfortunately). Or I could go through a whole narrative as I have privately with people about my fear that the Democrats are becoming the new Whigs, a party defined by hatred of a sitting President and who are willing to accept any alliance with anyone regardless of ideology who hates Trump the way the Whigs hated Andrew Jackson. When was the last time you voted for a Whig?

But let me just state this here – As terrible as Trump is and he is horrible, I don’t think anyone who is truly objective and not polluted by the maniacal ramblings on CNN and MSNBC could say he has been worse for this country as a whole than George W. Bush. When compared to Trump, Bush was equally anti-intellectual, certainly less rude, but willing to send American troops abroad and get killed based on lies and willing to crash the entire global economy to push a dated and discredited economic policy. This was a President whose seeming indifference or contempt to Hurricane Katrina led to directly to downturn in American soft power when coupled with the Iraq War. Simply put he was not that different than Trump in actual substance, and executed the greatest post-World War II policy blunders in American history in the process. The Democrats willingness to make common cause and promote the ideas of some of the most prominent Bush Republicans is not only distasteful – it’s downright disgusting.

For whatever reason, those in the Democratic establishment while trying to discredit Trump’s lies and lawlessness don’t seem bothered by associating with people who were involved in stealing a Presidential Election in 2000 (right here in Florida) and used manufactured and misinterpreted intelligence to send over hundred thousand young Americans off to war. Trump’s lies matter (as they should) but the constant cognitive dissonance of neoconservatives which resulted directly in tens of thousands of deaths can be forgiven? I suppose their leader George W. Bush redeemed himself when he painted some cute pictures of dogs, maybe that is all Trump needs to do when out of office to be forgiven by certain elites.

We are however in an era where many leading Democrats are less well-versed in world affairs and general happenings outside the political or media bubble than in the past. Opinions are being shaped less by ideology and well-versed balancing of sources but more and more by narratives that border on propaganda.

I always find it ironic the post-Presidency evaluations of President Obama by Democratic insiders and the adoring elements of the media. I think our most recent Democratic President was almost flawless on domestic policy especially given the mess he inherited from his predecessor.

On foreign affairs though, Obama’s meandering policy on Russia (remember he too was very soft on Russia for a while and pushed back on Mitt Romney’s claims they were a threat) and his willingness to send American troops to Libya in alliance with the French and improper and in my opinion illegal drone war in Pakistan have been all forgotten by Democrats.

Obama while not nearly as bad as Bush wasn’t exactly peachy when it came to avoiding foreign entanglements. He adjusted well in his second term, but his first term was fraught with foreign policy errors and a desire to appear as tough militarily as the Republicans do. But Obama’s highly-successful domestic policies have been regularly attacked by other Democrats during this campaign! He didn’t go far enough says the narrative. Really? Did these Democrats live through the Great Recession? I’d like to go further now, but the practical reality is we couldn’t in 2009 and 2010. That’s just the truth, Elizabeth Warren and Bernie Sanders supporters need to accept.

Building on the Obama economic legacy should be the talking point, not ripping it. But the foreign policy of the most recent Democratic President should be scrutinized. Instead it seems many Democrats have become comfortable with foreign interventions if not ordered by Trump, hostility toward Russia and the idea of American global hegemony. After all we have an army, why don’t we use it more, correct?

Congress regularly failed to reign in the constant foreign policy aggression of the Bush and Obama years but now is pushing imposing the War Powers Act on Trump. I say bravo, but why wasn’t congress willing to assert itself before? This leads back to the fundamental questions about the DC chattering classes, and why Bush and Obama were given a free hand. Perhaps this explains why Democrats and the media now are so comfortable to let neoconservatives help mind their store in 2020.

My hope in writing and publishing this long, meandering and  snarky piece is that the efforts of the establishment to use their control over mass media will be being pushed back upon by common sense, values-driven Democrats. I don’t have a personal preference for President but I like what Bernie Sanders and Elizabeth Warren say about economics issues and I like Joe Biden experience.

What I don’t like is Michael Bloomberg being invited not only into the bus at the same time as other former Bush allies are, but being given the keys to the bus as he passes cash and compliments around the room. The Bloomberg thing is not that simple, it a symptom of a great problem – the Democratic establishment and media allies obsession with anything Trump, contempt for working class voters and willingness to make shotgun alliances with anyone who shares their disdain for Trump.

← How MSNBC and CNN are helping spread Russian disinformation
Trump and “Gone with the Wind”: The academic history behind the racist “Lost Cause” narrative →