Why do the Dream Defenders and other leftists push BDS for Israel but not others? 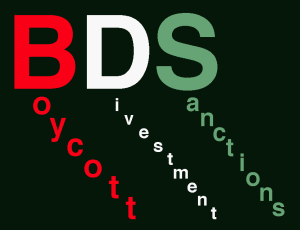 In recent days Ron DeSantis has sloppily made the Dream Defenders support of Andrew Gillum an issue, using BDS (Boycott Divest Sanction) of Israel as his chief talking point. From a purely political perspective you have to assume Adam Putnam were he the GOP nominee would be far more effective in nailing Gillum on this than the goofy, clownish DeSantis.

More importantly, the BDS of Israel advocacy by the Dream Defenders and other left-leaning advocacy groups again demonstrate the growing antisemitism within the Democratic Party in Florida. I’ve long advocated for a separating views of Israel from that of domestic Jewish-Americans. Israel is a nation-state that deserves scrutiny for its policies particularly when Likud is in power, while every social justice movement of the last 100 years in the United States has had Jewish-Americans at its center- including the Civil Rights movement.

But unfortunately the conflation of these issues which happens on left and right now makes it difficult to delink them completely. Political agitators have conflated them so we have to proceed on these lines unfortunately.

The professional left has made an effort to emphasize identity and diversity as part of just about any conversation about public policy. Generally this has resulted in perhaps unintentionally in what seems to be an excessive emphasis on the sins of white people. The use of the term “apartheid” to describe Israel is misplaced, though I will readily admit I have publicly used that term to describe Saudi Arabia’s treatment of women and Shi’a Muslims in the past.

Having perspective and nuance in these discussions are important but neither left or right wants to do that now. The right has made white identity a part of their being and while the vast majority Jewish-Americans vote for Democrats, owing itself to the communities long advocacy of social justice. An advocacy often forgotten by today’s identity police on the left. Nonetheless, the GOP’s support for Israel is usually more about appealing to white christian fundamentalists than anything else, a problem again because it demonstrates the right’s growing theocratic view of politics.

From my vantage point its pretty galling that many on the left don’t hold theocratic Saudi Arabia and the kingdom’s clearly documented attempts to influence Donald Trump’s campaign and his subsequent fealty to them in quite the same manner they view alleged Russian influence on the electoral process (the means by which the Saudi’s and Russians attempted to influence the election were different – the Saudi’s and Emirati’s allegedly directly got involved with Trump’s campaign while the Russian’s used various means to influence electoral systems – perhaps this explains Trump’s subsequent virtual suzerainty to the murderous misogynistic Saudi royals while he’s been inconsistent perhaps even hostile at times to Putin).

Meanwhile the left doesn’t push the idea of BDS on regimes in Saudi Arabia, UAE and Qatar that have far greater and more strategic investments in the US than Israel – they don’t advocate standing up for human rights in those states the way they do in Israel. They don’t bother with areas like Sri Lanka and Myanmar with similar human rights record, though US economic ties to those two nations are minimal compared to the Persian Gulf region.

As the population of Indian-Americans has grown and our community has become more and more engaged politically within the Democratic Party, any discussion of Indian policy in Kashmir has seized. My own views on the topic are conflicted but that’s not the point – the point is as the professional left that’s associated with the Democratic Party has made identity a main component of everything they do, emphasis on Israel and BDS has grown inconsistently with similar struggles including other large communities in the United States.

It’s difficult to understand why the professional left focuses on Israel so heavily as a target other than to pinpoint identity as the reason. Simply put, as Bill Maher has pointed out more times than I can recall, the left has a mind-numbing inconsistency on Islam in general.  I’ve grappled with this myself, trying to understand why we on the left so eagerly and correctly call out fundamentalist behavior among Christians but won’t among Muslims.

For me personally, time after time when I have tried  to have an educated and nuanced conversation with people on the left in the United States  about the right-wing radicalism of certain strands of Islam, the racism practiced against people whose appearance is similar to mine by the right-wing rulers of several US-backed dictatorships in the Gulf region (Saudi Arabia, Kuwait, UAE, Bahrain and Qatar), and the real threat posed these conservative forces, I get serious push back from my natural ideological allies and even get called a racist from time to time for these views. Even with Trump’s fealty to Saudi Arabia the conversation was tough. Many times when I would say something about Trump’s alliance with the barbaric Saudi royals, the conversation would turn to Russia, who if anything is trying (rightly in my view) to counter Saudi domination of the Middle East. In the wake of grisly (allegedly, but c’mon now) state-sponsored Jamal Khashoggi murder and the Dream Defenders issue coming to the forefront, it’s time to revisit this.

It’s perfectly acceptable to oppose settlements, Likud and Netanyahu and still feel Israel has a right to exist and is probably less onerous in its treatment of dissidents and minorities than nearby Arab states. Perhaps it’s my orientation as a South Asian that leads me to my strong moralistic opposition to the Gulf States and Saudi Arabia – Pakistani’s and Indian’s along with other peoples from south and southeast Asia. I don’t excuse Israeli handling of the Palestinians at all either – in fact my position would probably be described as “pro-Palestinian” by most. We can have these conversations, but don’t intelligently .

However, the problem remains the professional left’s blind spot toward the practice of racism, oppression and misogyny in nation’s where colored people rule as opposed to where (perceived) white or privileged people rule.

Returning to the issue of BDS and the Dream Defenders, it’s unfortunate for Andrew Gillum he’s caught in the crossfire. He’s politically savvy enough to have avoided personally the sort of advocacy the Dream Defenders have made on this issue and the use of the term “apartheid.” But on the professional left using racially or ethnically-charged buttons to provoke emotion and anger has become standard practice. The use of Israel as a piece of red meat to throw to progressive millennials, and racial minorities is abhorrent. It’s especially sickening because it puts Jewish-Americans in the cross hairs of fire from the left and the right, whose own antisemitism in on the rise thanks to the rhetoric of Donald Trump.

I can’t advise Andrew Gillum on what to do about the Dream Defenders. They backed him in the primary and helped carry him to victory in coalition with other like-minded professional left groups. He’s in a tough quandary and can’t win either way at this point.

But I can advise the left, the real left not tied professionally to the party or aligned interest groups/organizations to maintain some consistency and remember who your actual allies for social justice have been all these years.