In the days following the collapse of the FIU pedestrian bridge, the media tried to simply explain the reason for the collapse of the bridge. Perhaps it was a lack of resources or the need to simplify the issue but a misconception developed thanks to multiple media outlets. The misconception was that the FIU pedestrian bridge which was upon completion to be a cable-stayed structure, was actually a form of a suspension bridge.

In reality cable-stayed bridges (like the Sunshine Skyway Bridge over Tampa Bay or the pictured Napoleon Bonaparte Broward Bridge over the St John’s River in Jacksonville) appear like suspension bridges (like the Golden Gate Bridge or Delaware Memorial Bridges) but are in fact very different.

Cable-stayed bridges may appear to be similar to suspension bridges, but in fact, they are quite different in principle and in their construction. 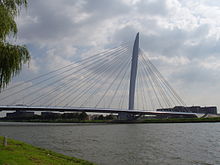 Prins Clausbrug across the Amsterdam-Rhine Canal in Utrecht

In suspension bridges, large main cables (normally two) hang between the towers and are anchored at each end to the ground. This can be difficult to implement when ground conditions are poor. The main cables, which are free to move on bearings in the towers, bear the load of the bridge deck. Before the deck is installed, the cables are under tension from their own weight. Along the main cables smaller cables or rods connect to the bridge deck, which is lifted in sections. As this is done, the tension in the cables increases, as it does with the live load of traffic crossing the bridge. The tension on the main cables is transferred to the ground at the anchorages and by downwards tug on the towers.

In the cable-stayed bridge, the towers are the primary load-bearing structures which transmit the bridge loads to the ground. A cantilever approach is often used to support the bridge deck near the towers, but lengths further from them are supported by cables running directly to the towers. This has the disadvantage, compared to the suspension bridge, that the cables pull to the sides as opposed to directly up, requiring the bridge deck to be stronger to resist the resulting horizontal compression loads; but has the advantage of not requiring firm anchorages to resist the horizontal pull of the main cables of the suspension bridge. By design all static horizontal forces of the cable-stayed bridge are balanced so that the supporting towers do not tend to tilt or slide, needing only to resist horizontal forces from the live loads.

Key advantages of the cable-stayed form are as follows:

It’s worth noting this mistake has been made often in the media, even here in the state of Florida. When the City of Orlando went forward building towers on a bridge over Lake Underhill on The East-West Expressway earlier this decade, The Orlando Sentinel and other local publications referred to it as a “faux suspension bridge.” The reality is that the towers which had to be shortened because of incoming airplanes at Orlando Executive (Herndon) Airport, was in fact identical in its look to the Sunshine Skyway Bridge’s towers – a bit different though, the towers on the 408 were merely for decoration and had no structural bearing on the bridge itself. The bridge appears to be a cable-stayed bridge but actually serves no purpose other than to “welcome” drivers to Orlando (my theory has always been that Orlando leaders were envious of the Tampa Bay Area having the “flag bridge of Florida”, so they undertook a half-baked effort to mimic it … an effort that failed miserably) .  A more appropriate use of a cable-stayed bridge to welcome drivers to a city is the trio of bridges recently built in Dallas, including the Margaret Hunt Bridge, pictured below.

As for the actual reasons for the collapse of the bridge and the negligence of authorities the media is doing a good job of keeping up the pressure. Between the tragic post-Irma nursing home deaths, the MSD school shooting and now this bridge collapse, it’s been one of the most traumatic times I can remember to be a south Floridian. The media and the activism their coverage is spawning is the only thing that is keeping us from falling into a terminal decline in this area. So with the exception of not knowing the difference between types of bridges, I give them an A+ for the work they are doing.

← 15 years on from the invasion, very little media attention on Iraq? Why?
John Bolton appointment a capstone on 15 years of declining American influence abroad →