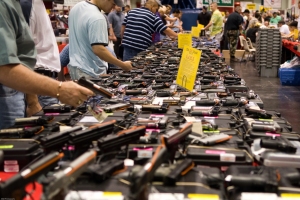 I’ve waited ten days to comment on this website about the school shooting because unlike other school shootings or tragedies or terrorist events, this one not only happened in my nation (San Bernandino, Columbine, Sandy Hook, etc), my state (Pulse) or my county (FLL shooting) but happened in my backyard, just literally around the corner from me (though it should be noted I was at my office in the Brickell section of Miami, 40 miles away when the shooting occurred). I’ve spent the majority of my life as a resident of either Coral Springs or Coconut Creek, the two municipalities that border Parkland.

I did not attend Marjory Stoneman Douglas High School (MSDHS), though had I lived just a few blocks over from where my family resided in High School, I would have. But because the boundary fell where it did as close to me, some of my best friends from my High School went to MSD after the split in Grade 11, while I remained at JP Taravella. Since my wife and I moved back to Coral Springs in 2016, anytime either of us would drive north we pass right by MSDHS shortly into our drive. So this is a deeply personal matter for me, and while others have used the tragedy to get attention I and others have just tried to help and soothe quietly. Often forgotten today is that throughout the majority of its history since the opening of the school in 1990 MSDHS’ student body has largely come from Coral Springs – more recently with more schools built and growth in Parkland, that’s changed somewhat.

In the past school shootings were just things we felt bad about for a few hours for me and a reason to scream about gun control and how terrible the NRA was – now it’s deeply personal. With that in mind, I have delved deeper and want to discuss this issue more maturely. My talking points are below:

1- I’ve lived on and off in Northwest Broward County since 1979. This is absolutely the worst thing that has happened to our community. We’ve had lots of terrible things happen in nearby Miami or Fort Lauderdale but never right at home. If you have not been shook up by this as a Parkland, Coral Springs, Coconut Creek or Tamarac resident, I don’t know what will shake you up. It’s also time after ten days to while remaining emotionally driven, to think rationally about the causes of such violence.

2- I’ve never understood the need for assault rifles or even handguns in urban areas like ours where we have excellent well-trained professional law enforcement officers. As far as rural areas, I do understand the need for guns in those areas particularly for females which is why I try and nuance my position on gun control. I wish we could break it down by region. I don’t think ANY private citizen should have a gun in Broward County for instance. But in Jackson or Washington counties, I’d never make such a claim. So I understand the pushback from some Florida legislators. But as noted above I work in Miami, and the prevailing sentiment from the people I’ve spoken to down there is that ultimately despite some leadership from the region it’s a legislature that has a contempt for south(east) Florida. The cultural divide between Miami-Dade, Broward and Palm Beach counties versus the rest of the state has always been a hot-button in Tallahassee. Conservative Senator Dempsey Barron (D-Panama City) who ran the body for all intents and purposes for two decades made his living beating up on the region and The Miami Herald. In the past I sympathized with the legislators, because the attacks from south Floridians to me always seemed to be biased, elitist and quite honestly based in many cases on anti-southern prejudice.  But in this case it seems the legislators are loving sticking it to Broward County. That simply isn’t acceptable.

3- Speaking of Miami-Dade and Broward, when I grew up we had an incredible sense of community, one community. But as Miami has emerged as an elite global destination with many residents much like New Yorkers who look down on New Jersey (and refuse to take a PATH train for a 15 minute ride under Hudson to NJ for various events), and Broward has filled up and developed its own institutions (heck to fly to most major European or South American destinations now, you can go directly from FLL…the drive to MIA used to be one thing that kept us connected) a sense of different communities and different worlds has sprung up. Broward people don’t go south and Miami people don’t come north. We live in separate bubbles looking down on each other (or maybe looking up with envy?). But this tragedy seems to have brought the region together. I am constantly seeing signs of anger and activism in Miami-Dade related to MSD, and the return of a sense of south Florida vs Tallahassee mindset. While it’s brought south Florida together this situation has also reinforced to many in the region that the area is different than the rest of the state. A colleague of mine who lives in Kendall said Wednesday to me how he has no desire to go north of West Palm Beach ever again in this state and will just “fly over” the rest of Florida when heading to points north. I used to hate that mindset and pushback, often saying to people how great Jacksonville or Pensacola was if you give it a chance. But I realize now, that debate will never be won, and should not be had unless the legislature acts on this matter.

4- Banning guns is one thing and I support many of those efforts. But also we must not run from other causes of violence. When I was coming of age politically most of my fellow liberals agreed with me that violent video games and macho Hollywood films were a problem – a bad influence on our youngsters. Today it seems the left wants to ignore those problems partly I believe because of the amount of Hollywood and technology money flowing to Democratic candidates, not unlike the NRA money flowing to many GOPers. The reality is BOTH must be discussed. Guns are I believe far more important but let’s not minimize the other causes and ignore them because it’s politically convenient.

5- We have to be willing to listen to one another. Our society is on the brink of a collapse from various factors. People have used social media and cable news channels that reinforce their own biases to retreat to silos. This isn’t just true politically but in all walks of American society. This is unhealthy for a society in our country that is falling further and further behind the level we had achieved when we were the most successful and powerful nation on the planet in terms of not only the military but ideas and ideals also. We need to mature as a society. Our current President is a symptom of our larger problem – intolerance, self-absorption and an unwillingness to consider other points of view. It’s not just a problem on the right, but on the left and in the middle also. I just came through a US Soccer election where the stakeholders, largely leftist in their political and world views were unwilling to listen to each other or contemplate any sort of compromise or consensus-oriented solutions. It was a very revealing experience as to how non-political electoral politics can get bogged down the same way political elections and conversations do (especially if the parties are excessively political themselves).

6- The kids give me hope. Coral Springs and Parkland is my home area so I am especially proud of the leadership we’re seeing from so many of them. Maybe they can do for this country what we adults have failed to do for so long. I am in awe of each and everyone of those student leaders from MSDHS. They could conceivably save this country, a nation in what appears to me to be a terminal decline in any number of ways.

7- I don’t like that in these debates many like to further ostracize those suffering from mental health issues. I’ll just leave it at that. I thought we had reached a point of understanding and compassion towards those with mental health problems not using them as constant scapegoats.

So many signs that the Florida shooter was mentally disturbed, even expelled from school for bad and erratic behavior. Neighbors and classmates knew he was a big problem. Must always report such instances to authorities, again and again!

President Trump, this is your single most irresponsible reaction to this tragedy…you’ve essentially called on big brother to act to further marginalize those that may or may not be suffering from mental illness from our society. Your tweet from the day after could create a wave of fear, misunderstanding and paranoia. I hope it doesn’t come to that, but fear it will like the paranoia of 1919-1920 (the red scare) the McCarthyite era and post 9/11 America. Extreme demogogic “leaders” in this country have time and again engaged the most anti-intellectual impulses of American society to trigger an angry reaction and to divert from the real issue. Trump’s action here is in this same tradition, unsurprisingly from someone whose lack of intellect is alarming.

← Has progressive secularism gone too far in the United States? Have Democrats anti-religious attitude created an electoral monster?
From Columbine to Stoneman Douglas: what have we learned? →