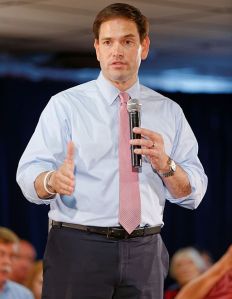 Floridians were treated to a US Senate debate on Monday night that featured a skilled performer.  Our state’s Junior Senator, Marco Rubio’s efforts at spin and diversion remain as strong as ever. Those who tuned in to the debate were treated to masterful entertainment as Rubio, a professional performer who borders on being a sociopath acted thoughtful, empathetic and informed about the plight of ordinary Floridians.

Some other websites and writers will dedicate tonight to breaking down all of Rubio’s lies and half truths. I don’t envy that job as it will quite possibly force an all-nighter for those tasked with this. That is because Rubio’s entire debate performance was filled with misleading statements and deceit. His entire act since deciding to return to Florida to seek a second term in the US Senate has been a con job.

For years, Rubio has depended on the softness of the media, particularly in his home base of southeastern Florida to create an illusion which has elevated him to being among the most recognizable national figures in the Republican Party. This election cycle however, the media in the state of Florida is wising up to Rubio’s song and dance. The amount of negative coverage that Rubio – a climate science denier who hails from the most vulnerable part of the United States to sea level rise, a flip-flopper on immigration for political purposes and a man whose public statements on the Obama administration’s foreign policy make him a borderline subversive and at the very least someone opposing American policy for political gain, is unprecedented in his political career.

When Rubio first ran for the legislature in a 2000 special election, he was seen as a young fresh face, coddled by the local press. As he rose through the State House he was lauded as an articulate spokesperson for free market principles and a rising star. When he ran for US Senate he was given the benefit of the doubt since he was running against Governor Charlie Crist who had switched from Republican to Independent to make the race in the General Election.

Rubio has long had the media on his side – but that ended when his Presidential campaign bombed and his opportunism became painfully obvious to the journalists that cover government and politics in this state. Rubio’s honeymoon ended the night in New Hampshire when Chris Christie artfully exposed the presidential hopeful as an empty suit whose greatest skill is reciting pre-programmed lines like a character out of the Manchurian Candidate .

However, Rubio continues to have the ability to hoodwink voters even with a hostile media. Once again tonight Rubio showed his ability, looking into a camera and spinning line after line. A dogmatic ideologue when he needs to be, with a voting record according to some interest groups to the right of Jeff Sessions, Ted Cruz, Mike Lee and Rand Paul, Rubio does not represent the interests of a diverse and cosmopolitan state. But these debates give Rubio an opportunity to look the part versus his less seasoned and camera-trained Democratic opponent.

Floridians must resist the bait and avoid being fooled by Rubio’s act. Our state’s very future and that of our nation long-term might depend on it.