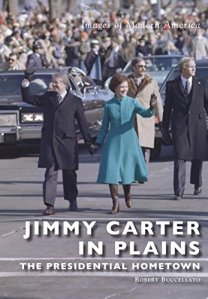 Forty years ago this month Jimmy Carter won the New Hampshire Primary setting up his 1976 march to the White House. Carter, who had begun the campaign as a largely unknown governor of Georgia was catapulted to stardom thanks to hard work, strong grassroots efforts and a humbleness unbecoming of a politician. In the wake of Watergate and the Vietnam War, he was the perfect tonic for an ailing nation.

Florida-based historian and author Robert Buccellato has put together a new book – Jimmy Carter in Plains: (Images of Modern America)

which will be released
Monday February 1.

The book is a unique look at the relationship between President Carter and his hometown. Exclusive photographs from Charles Plant in this book weave a motif of Carter and his family in the town of Plains, Georgia and one-of-a-kind looks behind the scenes at the Carter family on election night 1976 and the next morning. Other campaign items in the work include the first ever Spanish-language mass produced literature from a major Presidential campaign, campaign posters and letters. From the book you get a clear sense of how Carter was able to connect with populations in rural areas on a very personal level and how his style of retail campaigning was honed at home.

A must buy for any Carter fan, the pictures and anecdotes in the  book encompass storytelling with images that cannot be found anywhere else.

Below is a full length interview with the author about President Carter’s upbringing, influences, style and politics: