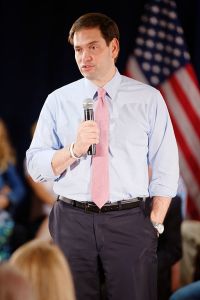 By Michael Vadon (Own work)

Florida’s Junior Senator is one of the most dangerous people to be taken seriously for a major party nomination in the post World War II era. In the past, the GOP was a hierarchical party, requiring nominees to “do their time” before being placed in a General Election. Ronald Reagan, George H.W. Bush, Bob Dole, John McCain and Mitt Romney all filled this bill as one-time losing candidates who had lengthy resumes before running the first time (or in Reagan’s case the second time in 1976 if you count his 1968 effort as an actual candidacy) and getting nominated the next time they ran. Rubio by contrast is a great hope for a party whose political base is now the great unwashed – those who vote based on emotion and low information. The GOP establishment rushing to his cause is a further sign that the party has gotten away from its northeastern and Wall Street roots and is now dominated by low-information voters and those who push simple narratives.

Rubio’s brand of anti-intellectualism is not a populist movement like that of his GOP rival Donald Trump. It is in fact a well-planned effort based on the needs of the gun lobby, religious conservatives and the neoconservative-leaning “patriotic” right-wing press – the new coalition of pressure groups that are attempting to control the Republican parties’ nominating process.

In Rubio, this coalition has found a patron saint. A man with absolutely no convictions and unlike Ted Cruz, a man without the intellectual ability to properly discuss issues without resorting to name calling or simple narratives. Rubio’s standard reply to anything revolves around the need to arm the American population, the need to adhere to religious values in this country and how President Obama has weakened America. The last point, Rubio has begun to deliver in an increasingly bitter and disrespectful manner one must assume simply to appeal to the masses who believe the President is not an American or who believe is a foreign agent.  Rubio’s pandering to the lowest common denominator among low-information voters is pathetic.

The implications of treason against the current President by Rubio are articulated in a far stronger fashion than previous shots of this nature – John F. Kennedy (falsely) accused the Eisenhower/Nixon administration of falling behind the Soviets in a “missile gap.” George W. Bush’s campaign used surrogates to attack John F. Kerry’s patriotism and imply he was in a way  treasonous. However, candidates have rarely if ever directly accused the sitting President of what amounts to treason.

On this the mainstream media has been silent. They have failed to press Rubio on his views that the President “has deliberately weakened America.” They have let him continue to use coded words to strongly imply treasonous behavior by a sitting President while the right-wing press has continued to repeat Rubio’s opinionated shots at Obama as if they were stone-cold facts, and that the President was an agent of European socialist government or something of the sort.

“He (Obama) has made an intentional effort to humble us back to size as if to say ‘We no longer need to be so powerful because our power has done more harm than good,'” Rubio said. “America is in far greater danger today than it was eight years ago.”

Yet this assertion has not been challenged directly and the anti-intellectual voters who Rubio hopes will flock to his candidacy are left to believe this is the case. His words also give aid and comfort to the enemies of our country and pause to our allies. At a time when President Obama and Secretary of State Kerry are working multilaterally to improve our standing geopolitically and work with our allies, Rubio’s rhetoric damages our nation’s standing.

Much like President Reagan, Rubio has tried to sell a mix of anti-intellectualism, phony patriotism, religion and “freedom” to garner support in the GOP primaries. He is far and away the most dangerous figure to be taken seriously by the Washington press corp in a Presidential campaign for a major party nod since the onset of the Cold War with the possible exception of Reagan himself. Rubio’s rhetoric after all isn’t terribly different than that of General Curtis LeMay who was George Wallace’s running mate in 1968.

This may sound like heresy to liberals but thank goodness for Ted Cruz and Donald Trump. Both need to continue to poll well and save this country from the possible disastrous consequences of a Rubio Presidency.