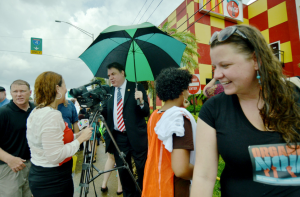 Fight For 15 action from earlier this year undeterred by rain, heat and lightning.

This was a big week for the Fight For 15 campaign, with a national strike and marches that were held here in Orlando, along with dozens of other cities from New York to California

The Fight For 15 events I’ve attended in Central Florida have been intense with participants undeterred by stifling heat, pouring rain, or even 4 a.m. gathering times. There’s no doubt that the energy is due to the fact that Orlando has the lowest median wage of 50 top American metropolitan areas. The folks who strike here, and those who join the actions in solidarity, feel the gravity of the movement. These actions are not empty social gatherings.

At the afternoon rally this week, State Sen. Darren Soto kicked off the speeches by touting a $15 minimum wage bill he co-signed. While I applaud the Senator for making an appearance at the event, I find it odd that the lawmaker who kicked off the rally didn’t participate in the Minimum Wage Challenge, which was a prominent feature of the Fight For $15 campaign.

Other speakers who followed Soto at the podium stood in solidarity with minimum wage earners by taking the Minimum Wage Challenge. Tax Collector Scott Randolph, Rep. Vic Torres and Sen. Geraldine Thompson all went to the trouble of budgeting $85 for a week to live on, and reported their experiences on social media. Soto’s main challenger in the District 9 Congressional race, Susannah Randolph, also took the challenge. These are no small gestures. It’s a big project to rearrange your life to live on poverty wages. It’s an even bigger project to report on the experience with social media messages every day. The folks who did this made a sacrifice to understand the issue, and to call attention to the problem.

As someone who lived on poverty wages for too long, I followed these stories closely, and dealt with the some bad memories they recalled, like when Carlos Guillermo Smith reported he “failed” the Challenge when he couldn’t afford a vital medication. I don’t consider his experience a failure, and I’m very thankful for his video testimony linked above (please take the time to watch, it’s worth it). His story resonated deeply with me, as it was a reality I lived with for many years — doing without medicine because there simply wasn’t money for it.

Some would say it’s okay for Soto not to “walk the walk” since he co-signed the bill. But I say if you’re going to put your name on a piece of legislation, it’s even more important to support it through action. Otherwise you’re telegraphing that you don’t own it. As adults not given to magical thinking, we know a $15 minimum wage is not going to pass this Republican legislature, or be signed into law by Rick Scott. Co-signing the bill, therefore, is somewhat of an empty gesture. So, this campaign is about changing minds, then laws. The Fight For 15 has actually been criticized for being more of a public relations strategy than an organizing strategy. But I believe that as a public relations campaign, it’s been wildly successful. It’s been absolutely necessary to change hearts and minds with a thorough PR campaign before embarking on an earnest legislative campaign.

The narrative has indeed changed so much, that just this week, the very first question of the Republican debate was:

Candidates, as we gather tonight in this very august theater, just outside and across the country, picketers are gathering as well. They’re demanding an immediate hike in the minimum wage to $15 an hour.

Not only did Neil Cavuto lead the debate with Fight For $15, he set the stage for the evening’s frame to be a clash of noblemen — in their “very august theater” — against barbarians at the gates. This shows that the Fight For 15 movement is defining our political moment.

Only a year ago, the narrative was for raising the wage to $10.10. Now, with unemployment hanging around five percent, many employers start new employees out at $12 an hour. This is what Bernie Sanders pays his interns. There’s even a movement away from tipping in restaurants, which requires paying servers a living wage. Minds have changed on this issue at a dizzying pace, and the folks at the Chamber of Commerce are freaking out.

So, if you’re a Conservative Democrat with a 100 percent approval rating from the Chamber, co-signing a bill that has zero chance of passing is the safest move you could make as a lawmaker. There’s no political capital risked.

But here’s the thing, by skipping the challenge, Soto missed the opportunity to speak to his constituency at the Chamber and business community to change their minds. The Minimum Wage Challenge wasn’t just designed to preach to the choir. It was designed to create change.

I believe those at the Chamber who bestow the 100 percent approval rating on Darren Soto are the ones who most need to understand the reality of living on $8.05 an hour. Clearly the Senator listens to his folks at the Chamber. Doesn’t it seem like he could bend their ear on this issue? Why should lobbying only go one way?

Had Sen. Darren Soto participated in the public relations aspect of this campaign by taking the Minimum Wage Challenge, he might have been able to use his influence to demonstrate that poverty wages are not good for working families, our communities and Florida as a whole.

Instead, as we saw with his vote in 2011 to preempt local governments from passing wage theft ordinances, he sided with the comfortable and turned his back on the afflicted. Politicians like Darren Soto might show up at your march, but they take their marching orders from elsewhere. The Chamber would never allow him to do anything that actually threatened to raise the minimum wage in a meaningful way.

My musing on lobbying being a two-way street, is just that: fantasy. A politician with a 100 percent approval rating from the Chamber isn’t going to rock his fancy teak-lined boat by speaking truth to power. I only point that out to show what should be possible. We all know who writes the checks and what they buy. Two-way conversations aren’t included in the sponsorship package.

UPDATE — Earlier this month SEIU Florida pledged to exclusively endorse and make contributions to candidates who agree to both take the minimum wage challenge and support the $15 an hour minimum wage bills. We’ll be interested to see if this holds true in the case of Darren Soto running in Congressional District 9.

Brook Hines is a writer, photographer, activist and former alt-weekly publisher, as well as an award-winning advertising creative with more than 20 years’ experience crafting strategy for clients ranging from healthcare companies to museums. She’s the Senior Political Correspondent for Progressive News Network (tune this Sunday at 7:30 pm or download the podcast anytime), and the Communications Chair for the Democratic Progressive Caucus of Florida. All opinions offered here are her own, delivered from the perspective of social theory, cultural criticism, and near constant stream of caffeine. Political and media analysis through a Progressive lens. Read all of Brook’s articles here. Check out brookhines.com.

These are her Italian Greyhounds, Trouble and Daphne.

There is no word in the English language that rhymes with orange.