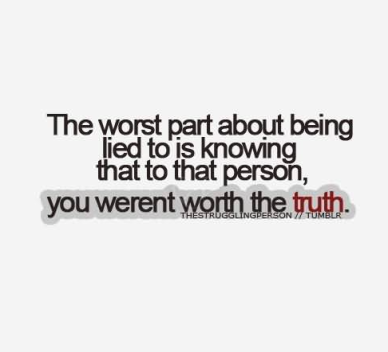 The LEAD (Leadership Expansion to Advance Democrats) Task Force Report led by Former Orlando Police Chief Val Demings and US Senator Bill Nelson is about to come out, so there’s going to be some discussion about how the party does stuff going forward.

Few rational people expect a sanctioned report by party insiders will tell the actual truth of why we can’t elect Democrats in Florida. And there’s a very clear reason for that: donors choose candidates. We just get to vote for them. When the candidates fail to get elected we get to hear about “oh, the voters are too lazy to get off the couch and vote.” The fact of the matter is that the voter is the consumer, and the donors are trying to sell us stuff we simply don’t want. It’s like we’ve gone to the mall for running shoes and they’re trying to sell us those fancy black pumps with the red soles that cost $400. They’re out of their minds.

Anyone with a firm grasp of the obvious has noticed that our candidates just don’t seem to be that into us, and voters likewise don’t seem to be very into them. The reason for that is because donor values don’t align with voter values.

Donors, who get to choose the candidates, choose those who represent their interests. Unsurprisingly, voters want candidates who will represent our interests, and we’ve been telling the party for more than a decade now that the donors’ choice of candidates really sucks. Sucks so bad, as a matter of fact, that donors could’t even pick candidates to beat Rick Scott, who is the very embodiment of everything that is urgently wrong and vile with the other party.

When the LEAD Task Force report does come out, it will no doubt suggest we fiddle with dials and levers at the county and DEC level. Less autonomy, more direction from Tallahassee, because, clearly people just aren’t listening to them. There will likely be suggestions for rules changes, and glowing promises for social media resources.

Let me save you some trouble.

Here are 5 Lies the Florida Democratic Party can stop telling us right now. If they stop telling these 5 lies — and if we choose candidates for voters instead of donors — we’ll start winning elections.

The first big lie: lazy voters are to blame

Party leaders and cheerleaders need to pull their load and stop blaming voters when they lose elections. There’s no such thing as a lazy voter who doesn’t “get off the couch” to vote for Democrats. When you put up lifelong Republicans who can’t be differentiated from Democrats, there’s no reason for Democratic voters to vote. You can have the most dynamic field operation since Obama 2008, and you’re not going to get Democrats excited about Charlie Crist.

Moreover, when you lose an election and then try to explain it away with the message that the voters are to blame, it just proves that you’ve lost perspective. It’s the job of political professionals to bring voters to the polls. When they don’t come, it’s your fault. Full stop.

The second big lie: we have to appeal to swing voters (omg, they don’t exist already!)

This can be painful for some who have invested so much in the fairy tale, but we have to let go of the myth of the swing voter. Republican strategists win elections because they accept this and play to its strengths. It’s time we did the same.

Democrats want to see real Democrats running for office. There’s no magical half-percent swing voter margin we’re trying to pick-up. Instead, the game we have to win is to mobilize our base. We have the voters. The task is to give them a reason to vote.

Instead of swing voters, what we have now are tribes and tribalism. On the left, you’re either a member of the Bernie Sanders/Elizabeth Warren Tribe or the Hillary Clinton Tribe — on the right you might be a member of any one of dozens of intersecting tribes. There’s religious, home-school tribes. There’s neocon tribes. There’s small government tribes. There’s second amendment, militia-fantasy tribes. Tribe membership prescribes behavior across the political spectrum.

A core motivator of tribal behavior is negative partisanship — that’s when you hate the other tribe that’s opposite of yours. You can most predictably move your tribe by showing them how those other guys are ruining everything — that they present a threat to your very existence.

There’s been some key research done on this that should be taken seriously by everyone in the Florida Democratic Party because this is where we’ve failed miserably. Here’s a graph from the extensive Pew report on Political Polarization in the American Public. It shows a giant 9-point spread between how Democrats and Republicans motivate fear/loathing in the other party. Democrats are 9% less likely to see the Republicans as a threat to the nation’s well-being, and are therefore less likely to be moved to vote. 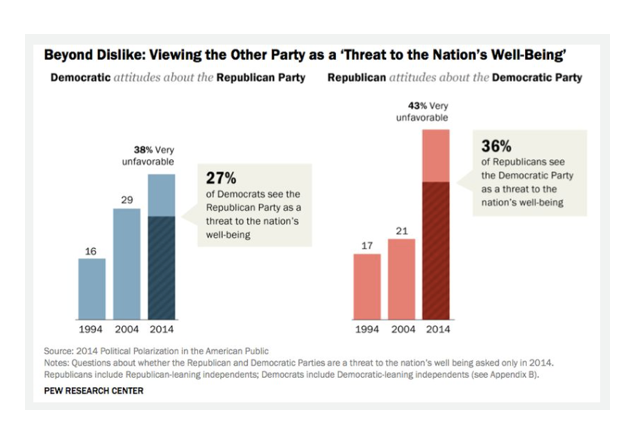 Do we not believe that the policies under Rick Scott or the modern-day scorched-earth Republican Party are devastating our communities, environment and social structure? Then why can’t we differentiate ourselves enough to win elections? Rick Scott is the literal embodiment of everything that is urgently wrong and vile with the other party. He’s the poster child for corrupt government. And yet we didn’t beat him.

It’s clear we couldn’t beat him because we didn’t put up a true blue candidate who could challenge him on his policies. Instead, we put up a lifelong Republican who’d just changed parties. His message was “Golly gee, when I was a kid, Republicans weren’t so mean. That’s why I’m a Democrat now.”

Did anyone in the upper echelons of the FDP stop for a second to think how this would feel to a rank-and-file Democrat who’d taken the time to vote against Charlie Crist? Or, what about a loyalist who campaigned against Crist in prior election cycles? Did anyone stop to think how insulting and defeating it would be to work for this guy, if you really and truly bought into our messaging just a few years ago when we were running against him? Putting him up as our standard-bearer was a huge mistake, and anyone connected with that decision needs to take a decade or so in the political time-out box. You’ve lost all credibility, so don’t even begin to lecture us on “the electability” of Alan Grayson.

That’s why the Republicans fight so hard to get “non-partisan” local elections — it’s the only way they can win, by hiding their affiliation. If you’re on the ballot during a big Democratic turnout year, you will win if you have a “D” next to your name.

Last week party insider Sean Phillippi suggested that if anyone but Patrick Murphy ran for Senate, it would have the potential “to be a serious anchor for Democrats nationwide in 2016 — and cause grief for our Presidential nominee at the top of our the ticket.” This is utter nonsense, as it’s a lie that stands other lies on their heads. It’s the kind of grand proclamation of one pint too many.

The only way a candidate as weak as Patrick Murphy can win is in a Presidential year. The heightened participation of a Presidential year provides a weak candidate opportunities he wouldn’t have in an off-year. Phillippi would like you to believe the upside-down world version where a true-blue candidate like Alan Grayson would actually hurt the chances of the Presidential candidate at the top of the ticket. He ups the hyperbole from here in Florida, to “across the nation,” even. This is such a howler of a lie within a lie I just had to relive it. Good stuff. Be on the lookout for more of these coming from the same direction as election season heats up.

Moving on, straight-ticket voting is very important because it leads to the fourth big lie…

Actually the opposite is true. In a big presidential year like 2016, straight-ticket voting means we could run a true blue Democrat or a Patrick Murphy corporate Democrat. The only question we have to ask ourselves as Democrats is, “who do we want to send to the Senate to represent us?” Are we going to send a Bernie Sanders or Elizabeth Warren Democrat who will fight on our behalf against Wall Street? Or are we going to send a Chuck Schumer Democrat in Patrick Murphy who can’t wait to form a “bipartisan” commission to force The Grand Bargain to reduce Social Security benefits?

The fifth big lie: we have to be like Republicans to get the “white vote”

After the 2014 “drubbing” it was speculated that we lost the “white vote” and that to get it back we had to move to the center on social issues to get white voters back. But wait, Bernie Sanders is surging among white Democrats. This proves that it’s not the liberal social issues that’s driving white voters away. It’s the lack of attention to liberal economic issues.

White Democrats are responding to Sanders’ message that the middle class has collapsed and we need to fight for rights to send our kids to college, preserve Social Security and rebuild our country’s infrastructure. The Sanders Vision is what has been missing because it’s exactly what a corporate Democrat, that donor’s love to choose for us, like Patrick Murphy can’t deliver.

The truth is that the middle class is dying. We have zero money for retirement. We have no money saved for flat tires or sick days. When things go wrong we go further into debt. We don’t have time for triangulation, talking points and fake donor candidates. We need solutions now. We need to stop the lies and start telling the truth so we can win elections and help our people regain some dignity and economic security.

Put up corporate Democrats all you want. Keep giving us lifelong Republicans to vote for. We’ll keep rejecting them. Let us know when you’re ready to win some elections with some real true blue Democrats and we’ll be right there behind you.